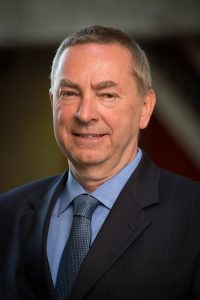 U.S. Department of Energy’s Fermi National Accelerator Laboratory Director Nigel Lockyer has received one of the highest honors handed out by the United Kingdom. In her New Year’s honors list, Her Majesty The Queen named Lockyer Officer of the Order of the British Empire, one of the highest ranks in the nation’s order of chivalry.

Every year the honors list recognizes people from the UK and the Commonwealth for their extraordinary contributions to society. This year’s list includes actor Daniel Craig, famous for playing James Bond, and tennis player Emma Raducanu, who won the 2021 US Open.

Lockyer, who was born in Scotland and raised in Canada, was recognized for his “services to science and UK/US relations.” Appointed director of Fermilab in 2013, Lockyer has spearheaded the lab’s efforts to host the international Deep Underground Neutrino Experiment. More than 1,400 scientists and engineers from over 30 countries are working on DUNE.

The United Kingdom is a major partner in DUNE. In 2020, representatives from UK Research and Innovation and the U.S. Department of Energy signed an agreement that outlines £65 million worth of contributions that UK research institutions and scientists will make to DUNE and related projects, such as the construction of the PIP-II particle accelerator. In addition to building components for the gigantic particle detector that is at the heart of DUNE, UK scientists are playing a vital role in creating the world’s most powerful neutrino beam.