The Science and Technology Facilities Council, or STFC, has signed an agreement with Fermi National Accelerator Laboratory, in the United States, designating how the two organizations will collaborate to build one of the world’s most powerful linear accelerators.

Based at the U.S. Department of Energy’s Fermilab, the PIP-II accelerator, currently under construction, is an essential upgrade to the accelerator complex — and once complete, will enable the world’s most powerful high-energy neutrino beams.

This will allow physicists to study the elusive neutrino particle — known for having very little mass, traveling at nearly the speed of light and possibly holding the secrets to some of the biggest unanswered questions in physics. 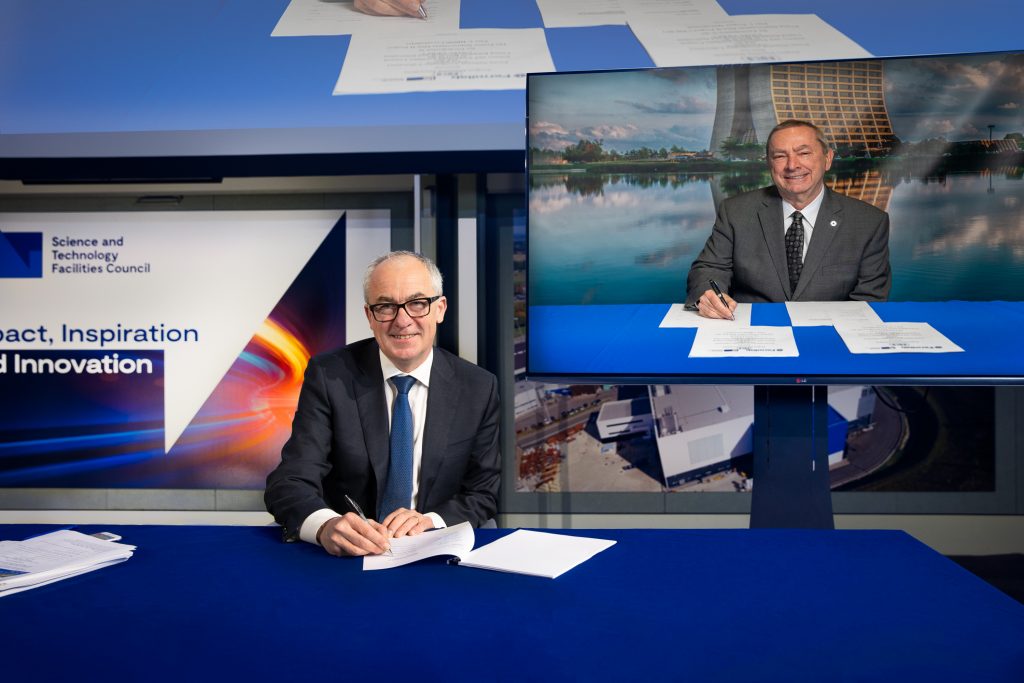 STFC Executive Chair Mark Thomson and Fermilab Director Nigel Lockyer sign the agreement detailing how the organizations will collaborate to build one of the world’s most powerful linear accelerators. Photo: STFC

The U.K. and the PIP-II accelerator

Today’s agreement sets out how the U.K. will contribute to the PIP-II accelerator project, which provides the engine for the highly-anticipated global science experiment, the Deep Underground Neutrino Experiment, or DUNE, hosted by Fermilab.

DUNE is an international flagship science experiment designed to study neutrinos. Results from studies looking at the neutrino particle could potentially revolutionize our understanding of the universe.

The PIP-II accelerator will also power a suite of other experiments at Fermilab. Its high-power beams can be delivered to multiple experiments at once.

“Today’s agreement further strengthens the U.K.’s collaboration with our U.S. partners in this crucial project, which sits at the heart of a new globally significant facility at Fermilab.

“STFC’s continued commitment to the Fermilab neutrino program will pave the way for fundamental discoveries into the nature of these most elusive particles, and will provide key insights into the origins and evolution of the universe.”

The U.K.’s involvement in the upgrade has been made possible through the U.K. Government’s £79-million investment in the DUNE experiment, Long-Baseline Neutrino Facility, also known as LBNF, and the new PIP-II accelerator.

This investment, delivered by STFC, has given U.K. scientists and engineers the chance to take leading roles in the management and development of the DUNE far detector, the LBNF neutrino beam targetry and the PIP-II accelerator.

Five nations are collaborating together with the United States to build the powerful PIP-II accelerator: France, India, Italy, Poland and the U.K.

“We are grateful for the world-class expertise and contributions of our international collaborators in building a state-of-the-art particle accelerator powering the world’s most intense neutrino beam. This upgraded technology will drive the next 50 years of global neutrino research in particle physics and the Science and Technology Facilities Council’s contributions will help make this possible,” said Nigel Lockyer, Fermilab director.

In the U.K., STFC will design, build and qualify vital elements of the 215-meter-long particle accelerator, which will accelerate the proton beam to its highest energy.

The main elements currently being developed at STFC’s Daresbury Laboratory are the superconducting cryomodules.

Cryomodules act like a large cooler, working at minus-271 degrees Celsius, to keep the instruments inside, known as radio-frequency cavities, or RF cavities, cryogenically cooled.

RF cavities store the energy needed to accelerate the proton beam, which, when fired into a carbon or beryllium target, will produce a high intensity beam of neutrinos.

By making the RF cavities from a material called niobium — which is both malleable and is superconducting at low temperatures, they become extremely efficient and need very little electrical power to achieve the powerful beam acceleration.

A powerful proton beam striking a target is critical for the study of neutrinos because neutrinos do not interact with other particles very often, which makes them hard to spot, so scientists need to produce lots of neutrinos to detect even one in the massive detectors.

Niobium is a rare metal with only a few sources and suppliers around the world. It is also not an easy material to work with, as it reacts with oxygen in the air at high temperatures — such as the high temperatures found in the welding process.

STFC has been working closely with industry partner The Welding Institute, or TWI, in Cambridge, U.K., which has commissioned the U.K.’s first electron beam welder able to weld in vacuum the high-purity niobium cavities.

Now 18 months into the project, the STFC Daresbury Laboratory team is making its way through major milestones, including the completion of the cryomodule transport system design.

Once the cryomodules are built, each of them will need to be safely transported to Fermilab in the United States. The transport frame has to protect the cryomodule and all its high-tech components during transportation.

“The UK, STFC and Daresbury Laboratory in particular have a fantastic opportunity to provide cutting-edge accelerator technologies for ‘powering the heart’ of the international flagship project LBNF/DUNE in the United States.

“I am immensely proud of how the delivery team at Daresbury, along with our industry partners, have adapted to the challenges faced in developing our leading provision of superconducting cryomodules for PIP-II.”

The PIP-II linear accelerator works by applying an alternating electromagnetic field to a beam of protons.

By attracting the moving particles at just the right time, it causes them to gain speed.

Particles are accelerated under high vacuum in special structures called cavities. Due to the significant amount of power required to accelerate the beam to high energies, even good electrical conductors like copper are unsuitable for use as cavities in this type of machine as they would convert too much power to heat.

Making cavities from superconducting materials such as niobium, significantly increases the machine’s efficiency as superconductors offer virtually zero electrical resistance to the power source. These materials only become superconducting at very low temperatures and must therefore be cryogenically cooled.

The cavities are housed in protective vessels called cryomodules. These insulating devices provide a sealed envelope for the SRF cavities, allowing them to be cooled down to 2 Kelvin or minus-271 degrees Celsius.

Imagery with captions and credits: https://ukri.box.com/s/tooux3op677em2x69a4ndzuiyl344cxp

About the Science and Technology Facilities Council

STFC funds and supports research in particle and nuclear physics, astronomy, gravitational research and astrophysics, and space science and also operates a network of five national laboratories, including the Rutherford Appleton Laboratory and the Daresbury Laboratory, as well as supporting U.K. research at a number of international research facilities including CERN, Fermilab, the ESO telescopes in Chile and many more. Visit https://stfc.ukri.org/ and follow @STFC_Matters for more information.