Physics research is a global endeavor — and this year, so was the Fermilab virtual open house. More than 12,000 science fans from 35 countries tuned in as the U.S. Department of Energy’s Fermi National Accelerator Laboratory hosted its 18th Family Open House from Feb. 9-13, featuring a combination of live and on-demand content.

“This was our second year of hosting the open house virtually, and we were able to take what people were most interested in last year and translate that to this year’s program,” said Amanda Early, Fermilab senior education program leader. “We’ve built this community of people from around the world who want to hear from us, and we’re already talking about ways to incorporate some of the best virtual elements into future events.” 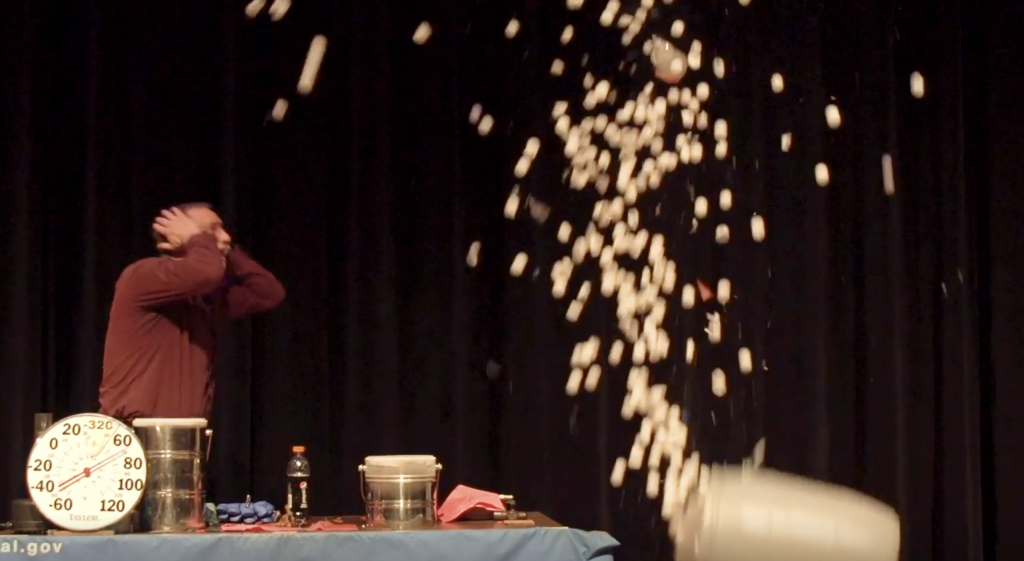 The program aimed to bring physics from the lab to the living room and included a variety of events and activities. There were tours of the Fermilab site and of the Muon g-2 experiment, which made international headlines in 2021 when muons were found behaving in ways scientists hadn’t predicted.

“We were able to see parts of the magnet you couldn’t see even in an in-person tour,” Early said. “It gives people a different view of how complex these experiments are, and how many people have to work together to make this science happen.”

Presenters gave talks on how to build big science experiments, what the world would be like without an atmosphere, and on the intersection of art and science at the lab. For the youngest scientists, Fermilab staff read children’s books during the popular STEM story time.

On-demand content included a virtual tour of the quantum lab, interviews with Fermilab employees about their work, short talks in the Pecha Kucha style, and the launch of Fermilab’s bison cam.

The virtual art gallery, “Be a part of pARTicles 2.0,” returned for its second year at the open house. Artists in 17 different countries took inspiration from science and created paintings, photographs, digital images, shock fossils, woodcuts, LEDs and other works. New this year was a Youth Gallery, featuring works by young artists — including an entire classroom of students in Turkey.

Many of the events and activities are still available to watch and can be accessed from the Fermilab Family Open House website or on the lab’s Office of Education and Public Engagement’s YouTube channel.

The annual open house is one of many ways that Fermilab strives to get people excited about physics. Other efforts include the Arts and Lecture Series, teacher workshops, classroom visits and educational series, such as Ask-A-Scientist and the Saturday Morning Physics — both of which have seen increased participation while virtual. The combined programs reach more than 100,000 people every year.

“Making these connections is pretty awesome, especially because you have a chance to show people there’s a place in STEM for them,” Early said, reflecting on a how a fourth-grade girl beamed when a female engineer answered her question in the Ask-An-Engineer session. “Maybe she grows up to be an engineer at the lab. You never know what kind of spark you’re going to have with somebody.”