As a musician, Suzie Shrubb has always looked up to the skies for inspiration. The music of the universe and its particles has always fascinated them, which is why their appointment as the U.S. Department of Energy’s Fermi National Accelerator Laboratory’s guest composer this year makes perfect sense. 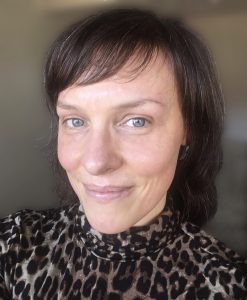 Fermilab’s 2022 guest composer Suzie Shrubb, who sees music and physics as one in the same, considers this yearlong residency as chance to musically express the energy and sounds of the science at Fermilab. Photo: Suzie Shrubb

Based in the United Kingdom, Shrubb, who uses both they/them and she/her as pronouns, is a composer as well as a classical and improvising musician who plays the piano and the oboe. They currently work with the Hurly Burly Theatre in the UK. Their previous collaborations have included work as a resident artist with the Oxford Playhouse, Lancaster University and Royal Opera House, among others.

Now in its third year, Fermilab’s guest composer program fosters the relationship and engagement between scientists, composers and the public. According to Shrubb, their yearlong online residency at Fermilab is a chance to musically express the energy and sounds of the science at the lab. From conversations with physicists to the specific noises of technology in experiments, these sounds and experiences all will inspire her body of work, which will be presented to the community at the end of the residency.

In some ways, her appointment at Fermilab is the culmination of two lifelong passions – music and physics. Shrubb has been a musician their whole life and started playing piano as a toddler.

“When I was a child, all of the Voyager and Pioneer data started coming back. I was fascinated by that,” said Shrubb. “Also, my mother would teach me all the constellations at night when I couldn’t sleep. So, I was very lucky in that respect; these ideas were always wafting around in my life.”

Shrubb said that at a certain point they just started to think of music and physics as one in the same. They drew inspiration from various ideas: the ancient Greek concept of music of the spheres (the idea that the movements of celestial bodies, such as the sun, the moon and the planets, are a form of music), great cosmic fugues, and various cosmologies of gods singing the cosmos into being.

“I feel like a musical space is a context through which we can take these particle physics systems that are a description of a reality and then translate them. It’s an expression and a relationship,” said Shrubb.

Shrubb has previously been a guest speaker for VOICES, or Virtual Ongoing Interdisciplinary Collaborations on Educating with Song, to share their work on translating neutrino oscillations into musical notation. At Fermilab, they have already begun talking to physicists about using experimental data for composition. Even though Shrubb does not have a particle physics academic background, she hopes that by engaging in dialogue with various Fermilab scientists, she can create pieces of music that are very specific to their field of research or work.

For instance, Shrubb is taking the mapped movement of a proton going through a detector to create a musical score that illustrates the proton’s journey. To do so, she first converts the mass or energy of the quarks that make up the proton into hertz and then translates that into scientific pitch notation, which can be played on any musical instrument. But as Shrubb pointed out, the science can inspire multiple different approaches and interpretations, including improvisation.

“The proton just becomes a set of instructions for our musicians. We all begin here, and we all know we’re going to end there. The piece is us going on this journey to find that beginning and ending place,” they said. “Working within the constraints of the journey, musicians can then improvise how they end up from start to finish.”

“I feel like a musical space is a context through which we can take these particle physics systems that are a description of a reality and then translate them.” — Suzie Shrubb, Fermilab 2022 guest composer

Shrubb noted that this interpretation may not necessarily speak to the truth of what’s going on with the particles. In order to reflect that, they are going to translate the data of the image to map the different energy levels to different pitches and notes.

“Suzie’s deep passion for, and prior experience in, melding physics and music composition made her a natural fit for this Fermilab adventure. Collaboration is such a huge part of Suzie’s music-making, working with various volunteer choirs and other groups, even through COVID,” said Janet MacKay-Galbraith, who manages Fermilab’s guest composer program, which explores the relationship between art and science.

“In fact, Suzie had already worked with [Fermilab scientist] Elena Gramellini, providing a musical backdrop for Elena’s 2021 Physics Slam film, before even starting their residency.”

Pulling from their previous work, Shrubb hopes to eventually run improvisation sessions for anyone musically inclined at Fermilab, so that people can gather and bounce ideas back and forth to create music together. They also plan to give a talk during their residency, explaining their process behind translating scientific data into music.

“They bring great enthusiasm to our guest composer program and is a terrific representative of the relationship between art/music and science,” added MacKay-Galbraith.