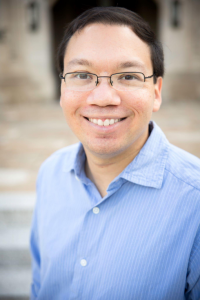 After finding a passion for the power of sound and the beauty of science in his youth, Roger Zare has been selected as Fermilab’s 2023 guest composer. Photo: Roger Zare

The artist behind the tonal landscape of the “Green Flash” and the rhythmic exuberance of “Far from Equilibrium” is the U.S. Department of Energy’s Fermi National Accelerator Laboratory’s 2023 guest composer Roger Zare.

Awarded for a variety of his work, Zare has even taken part in a workshop hosted by CERN at the Montreux Jazz Festival, where he presented as part of a session, titled “The Physics of Music and The Music of Physics.” A performance at CERN of his piece, “LHC,” performed by the award-winning Donald Sinta Saxophone Quartet, followed. The four movements of the piece explore different aspects of particle physics, from the duality of quark pairs to the energy in the beams of the LHC at that time, Zare said.

Instantly enamored by the beautiful sounds of the piano and violin in his youth, Zare continued his journey in music by producing more than 80 compositions — half of which are about science — over the course of his 37 years. His intersectional work translates concepts of higher-energy physics into the language of music to compose work that translates scientific concepts into music while still remaining accessible to the audience. Such work has allowed him to invent compositions that speak to other people as well as his own heart.

“I love the mind-blowing nature of what science is – where it is able to describe things that we’re almost unable to touch ourselves and explain things in the universe,” said Zare. “I’m excited by these big concepts in science, such as subatomic particles, and I can express my excitement through music.”

While Zare isn’t a scientist himself, he appreciates the complexity of physics; he will study certain topics in the field that serve as inspiration for his pieces so he can have a keener understanding. For instance, Zare’s piece called “Far from Equilibrium” was a collaboration between the composer, Chicago-based astrophysicist Elizabeth Hicks and choreographer Megan Rhyme. They helped guide his understanding, and the resulting composition focuses on the physics of turbulence. He said the piece touched on ideas of the chaos theory to the energy cascade of fluid particles as they progress toward turbulence.

“I experimented with unusual temporal notation to create unpredictable musical effects that represented the physics about which I was learning,” Zare said. “Working on this project was one of the most engaging and enlightening experiences I have had, and it continues to inform how I approach composition to this day.”

Zare was one of the 70 applicants from around the world who applied for Fermilab’s year-long guest composer program. The program enables Fermilab physicists and one composer to collaborate and bridge music and physics; ultimately, it’s intended to inspire people and, through the music created during the residency, help them appreciate science from a different perspective. Now in its third year, the program provides composers the means to build their contacts and communicate the science conducted at Fermilab.

“This program is a unique way to share the synergies and creativity that are common to both art or music and science, and to use music and art as a way to explore and communicate some of the scientific principles, experiments and work that we have going on at Fermilab,” said Janet MacKay-Galbraith, director of the guest composer program. “There are so many commonalities between science, music and art.”

“Hopefully, my work connects to people who aren’t necessarily scientists and helps inform them about some part of nature or the universe that they didn’t know about before.” – Roger Zare

For the guest composer selection process, a five-person committee with scientists, administrators and artists evaluate each applicant’s submission packets. Each packet will include a composer’s resume, two to three letters of recommendations, work samples and a statement of intent. One of the key factors the committee keeps in mind when reviewing submissions, MacKay-Galbraith said, is that the science explored is “represented appropriately and definitively.” In 2023, the program will run from Jan. 1 to Dec. 31.

“Roger had a remarkable statement of intent with a deep affinity for writing music about science. He had a very clear idea of what he wanted to compose, and what he needed to do to execute it,” MacKay-Galbraith said. “One of the things that Roger had that was very interesting to us was that in addition to his catalog of science-inspired work, he has created compositions for small and large chamber ensembles, which allows some flexibility in trying to figure out how to best showcase his role.”

Another source of inspiration for Zare is the DUNE detector that’s currently under construction. The way physicists study neutrinos and even the size of the future detector fascinate the composer. Because he sees music in a visual way, Zare tries to make musical shapes that reflect something in the world. During his residency with Fermilab, he hopes to create a musical story that imagines a journey a neutrino might take before reaching the neutrino experiment’s detector.

“The opening of the work will be chaotic and violent, representing the collapsing star. A middle section will represent the neutrino’s journey at the speed of light with paradoxical tempos occurring simultaneously – the neutrino is moving at the incredibly fast speed limit of the universe, but from our frame of reference, its time is essentially standing still,” Zare said. “The final section will represent the DUNE detector with grandiose music, eventually retracting into sparse flickers of sound that represent the occasional neutrinos interacting with it.”

Embracing the notion that music can communicate and even foster scientific understanding, Zare hopes his residency at Fermilab helps educate people about science and enrich their lives through sound.

“Hopefully, my work connects to people who aren’t necessarily scientists and helps inform them about some part of nature or the universe that they didn’t know about before,” said Zare.

The Fermilab composer-in-residence program is funded by the Fermi Research Alliance.