In a research article featured on the cover of the Dec. 1 issue of Nature, titled “Traversable wormhole dynamics on a quantum processor,” a team of physicists from Caltech, Harvard, Fermilab, MIT and Google present results on a pair of quantum systems that exhibit the behavior of a traversable wormhole. 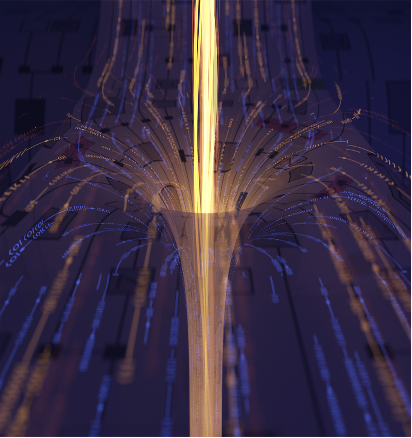 The physicists, including Joe Lykken, head of the Fermilab Quantum Institute, realized the wormhole dynamics experimentally on Google’s Sycamore quantum processor. The work constitutes a step toward a larger program of experimentally testing models of gravitational quantum theory using a quantum computer.

The team prepared a highly entangled quantum system and directly measured physical observables of the system. Specifically, the team inserted a qubit into a quantum model of interacting particles — known as a Sachdev-Ye-Kitaev system — by means of coding it using quantum gates. They observed the information of the first SYK system emerging from the second SYK system, all on the same quantum processor. The dynamics of this process are seen to be consistent with behavior expected from a quantum system dual to a wormhole in a two-dimensional anti-de Sitter spacetime.

The exercise nominally would require a quantum system of arbitrarily large number of particles known as fermions, which would be equivalent to an arbitrarily large number of qubits in an experiment. As the number of fermions is reduced, the resulting gravitational behavior becomes less well-understood from a theoretical perspective. Although it is difficult to a-priori write down a quantum system that resembles gravity when queried through the dictionary of “holographic duality,” the team employed learning techniques to find such a simple quantum system that could be encoded in currently available quantum architectures and that would preserve the gravitational properties.

Lykken said, “It is exciting to find that we can use the dynamics of quantum entanglement to investigate theorized features of quantum gravity.” He added, “With this work, we surprised ourselves that we managed to implement a ‘baby’ system while still preserving the gravitational dynamics.”

Joel Butler, chair of the Division of Particles and Fields of the American Physical Society, and former spokesperson of the CMS experiment at CERN, who was not involved in this research, remarked, “The field of elementary particle physics welcomes innovative experimentation and testing that can achieve progress in fundamental physics challenges such as quantum gravity; this is an exciting prospect for applying discoveries in other areas of physics to test theories that had seemed for the longest time beyond experimental reach.”

This research was funded through a DOE HEP QuantiSED consortium grant.