Batavia, Ill. – Scientists of the Booster Neutrino Experiment collaboration announced this week that a new detector at the U.S. Department of Energy’s Fermi National Accelerator Laboratory has observed its first neutrino events. The BooNE scientists identified neutrinos that created ring-shaped flashes of light inside a 250,000-gallon detector filled with mineral oil.

The major goal of the MiniBooNE experiment, the first phase of the BooNE project, is either to confirm or refute startling experimental results reported by a group of scientists at the Los Alamos National Laboratory. In 1995, the Liquid Scintillator Neutrino Detector collaboration stunned the particle physics community when it reported a few incidences in which the antiparticle of a neutrino had presumably transformed into a different type of antineutrino, a process called neutrino oscillation.

“Today, there exist three very different independent experimental results that indicate neutrino oscillations,” said Janet Conrad, a physics professor at Columbia University and cospokesperson of the BooNE collaboration. “Confirming the LSND result would suggest the existence of an additional kind of neutrino beyond the three known types. It would require physicists to rewrite a large part of the theoretical framework called the Standard Model.”

Over the next two years, the BooNE collaboration will collect and analyze approximately one million particle events to study the quantum behavior of neutrinos. Although these ghost-like particles are among the most abundant particles in the entire universe, little is known about their role in nature.

“It is an exciting time for neutrino physics,” said Department of Energy Office of Science Director Raymond Orbach. “In the past few years experiments around the world have made extraordinary neutrino observations, shattering the long-standing view that neutrinos have no mass. The MiniBooNE experiment has the potential for advancing the revolution of our understanding of the building blocks of matter.”

The MiniBooNE experiment, under construction from October 1999 to May 2002, relies on an intense beam of muon neutrinos created by the Booster accelerator at Fermilab. About 1,500 feet from its production point, the neutrino beam traverses a 40-foot-diameter tank filled with ultraclean mineral oil. The tank’s interior is lined with 1,520 light-sensitive devices, called photomultiplier tubes, that record tiny flashes of light produced by neutrinos colliding with carbon nuclei inside the oil.

“We will operate the experiment 24 hours a day, seven days a week,” said Bill Louis, a Los Alamos scientist and cospokesperson of the BooNE collaboration. “We will be looking for oscillations of muon neutrinos into electron neutrinos. If nature behaves as LSND suggests, our detector will collect about one thousand electron neutrino events over the next two years. If not, we won’t see any electron neutrinos. Either way, we’ll get a definite answer.”

The BooNE collaboration comprises 66 scientists from 13 institutions from across the United States. The 19-million-dollar MiniBooNE experiment has received funding both from DOE’s Office of Science and the National Science Foundation.

“In addition to the importance of the science, MiniBooNE is an example of a successful partnership among federal agencies, universities and national laboratories,” said Marvin Goldberg of the National Science Foundation. “The project has also set new standards for education and public outreach in the field of high-energy physics. The small scale of the project allows undergraduate and graduate students to participate fully in all of the experimental components.”

Why is the MiniBooNE detector filled with baby oil?

Signs of a fourth neutrino?

Milestones in neutrino physics around the world 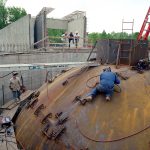 The MiniBooNE detector is housed in a 40-foot-diameter spherical steel tank. In May 2000, construction workers welded the final pieces together. The civil construction of the detector and the surrounding building cost 1.5 million dollars. 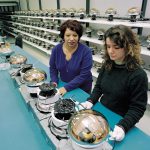 With the help of Sabina Aponte (left), Fermilab physicist Fernanda G. Garcia prepared photomultiplier tubes for their installation in the tank. 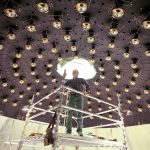 Led by physicist Peter Meyers, Princeton University, a group of scientists, engineers and technicians outfitted the inside of the 40-foot-diameter MiniBooNE detector with a double-sided layer of photomultiplier tubes. 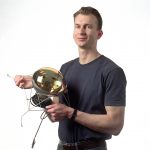 Princeton University scientist Andrew Bazarko with one of the 8-inch photomultiplier tubes used by the Booster Neutrino Experiment (BooNE) collaboration. 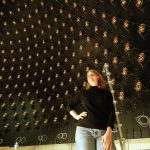 Bonnie Fleming, Fermilab, is one of about 60 scientists working on the MiniBooNE experiment. 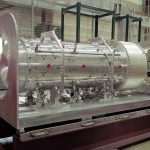 This focusing device, called a horn, is crucial to the MiniBooNE neutrino beam. It is pulsed five times per second with a 170,000-amp current, creating a strong magnetic field. Installed in the beam line, the horn steers neutrino-producing particles in the direction of the MiniBooNE detector. 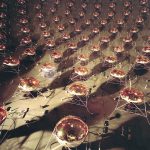 A close-up of the interior of the MiniBooNE tank, before it was filled with ultraclean mineral oil. 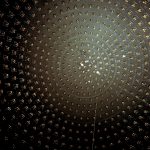 The inside of the MiniBooNE tank is covered with 1280 photomultiplier tubes. The picture shows a section of the upper hemisphere of the tank. 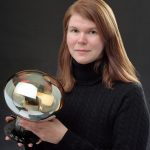 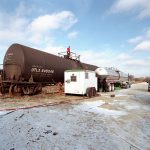 Twelve railcars delivered the oil for the MiniBooNE detector to Fermilab. Technicians used food-grade-clean pipes and trucks to get the oil into the detector. 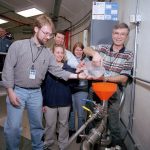 Fermilab deputy director Ken Stanfield (right) had the honor of pouring the final cup of oil into the MiniBooNE detector, assisted by physicists Eric Hawker and Jennifer Raaf (both University of Cincinnati). Looking on are BooNE cospokespersons Bill Louis and Janet Conrad. 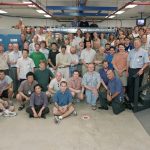 BooNE scientists, standing in the electronics room of their experiment, began to observe the first neutrino events in September 2002. Their 250,000-gallon neutrino detector is located right beneath the concrete floor. The experiment will either confirm or refute the results obtained by the Los Alamos LSND collaboration in the 1990s. 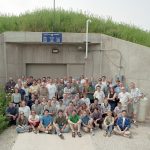 BooNE collaborators, here posing in front of the entrance to their experiment, come from 13 scientific institutions from across the United States. The 19-million-dollar MiniBooNE experiment is funded by the Department of Energy and the National Science Foundation. 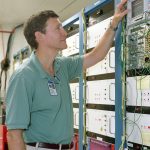 BooNE cospokesperson Bill Louis, here checking the MiniBooNE data acquisition system, is a scientist at Los Alamos National Laboratory. In the 1990s, he worked on the LSND experiment, which triggered the idea for the MiniBooNE experiment. 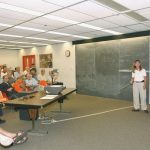 About one hundred scientists attended the presentation by BooNE physicist Fernanda G. Garcia on September 9, in which she showed one of the first neutrino events observed by the MiniBooNE detector. 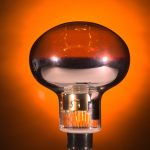 Large photomultiplier tubes, like this 8-inch model used in the MiniBooNE experiment, are capable of detecting tiny flashes of light that are produced when a charged particle travels through translucent material such as water or oil.