Scientists of the CDF collaboration at the Department of Energy’s Fermi National Accelerator Laboratory announced the observation of a new particle, the neutral Xi-sub-b (Ξb0). This particle contains three quarks: a strange quark, an up quark and a bottom quark (s-u-b). While its existence was predicted by the Standard Model, the observation of the neutral Xi-sub-b is significant because it strengthens our understanding of how quarks form matter. Fermilab physicist Pat Lukens, a member of the CDF collaboration, presented the discovery at Fermilab on Wednesday, July 20.

The neutral Xi-sub-b is the latest entry in the periodic table of baryons. Baryons are particles formed of three quarks, the most common examples being the proton (two up quarks and a down quark) and the neutron (two down quarks and an up quark). The neutral Xi-sub-b belongs to the family of bottom baryons, which are about six times heavier than the proton and neutron because they all contain a heavy bottom quark. The particles are produced only in high-energy collisions, and are rare and very difficult to observe.

Although Fermilab’s Tevatron particle collider is not a dedicated bottom quark factory, sophisticated particle detectors and trillions of proton-antiproton collisions have made it a haven for discovering and studying almost all of the known bottom baryons. Experiments at the Tevatron discovered the Sigma-sub-b baryons (Σb and Σb*) in 2006, observed the Xi-b-minus baryon (Ξb–) in 2007, and found the Omega-sub-b (Ωb–) in 2009. The lightest bottom baryon, the Lambda-sub-b (Λb), was discovered at CERN. Measuring the properties of all these particles allows scientists to test and improve models of how quarks interact at close distances via the strong nuclear force, as explained by the theory of quantum chromodynamics (QCD). Scientists at Fermilab and other DOE national laboratories use powerful computers to simulate quark interactions and understand the properties of particles comprised of quarks.

Once produced, the neutral Xi-sub-b travels a fraction of a millimeter before it decays into lighter particles. These particles then decay again into even lighter particles. Physicists rely on the details of this series of decays to identify the initial particle. The complex decay pattern of the neutral Xi-sub-b has made the observation of this particle significantly more challenging than that of its charged sibling (Ξb–). Combing through almost 500 trillion proton-antiproton collisions produced by Fermilab’s Tevatron particle collider, the CDF collaboration isolated 25 examples in which the particles emerging from a collision revealed the distinctive signature of the neutral Xi-sub-b. The analysis established the discovery at a level of 7 sigma. Scientists consider 5 sigma the threshold for discoveries.

CDF also re-observed the already known charged version of the neutral Xi-sub-b in a never before observed decay, which served as an independent cross-check of the analysis. The newly analyzed data samples offer possibilities for further discoveries.

The CDF collaboration submitted a paper that summarizes the details of its Xi-sub-b discovery to the journal Physical Review Letters. It will be available on the arXiv preprint server on July 20, 2011.

CDF is an international experiment of about 500 physicists from 58 institutions in 15 countries. It is supported by the U.S. Department of Energy, the National Science Foundation and a number of international funding agencies. 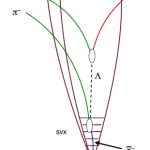 Once produced, the neutral Xi-sub-b (Ξb0) particle travels about a millimeter before it disintegrates into two particles: the short-lived, positively charged Xi-sub-c (Ξc+) and a long-lived, negative pion (π-). The Xi-sub-c then promptly decays into a pair of long-lived pions and a Xi particle (Ξ–), which lives long enough to leave a track in the silicon vertex system (SVX) of the CDF detector before it decays a pion and a Lambda (Λ). The Lambda particle, which has no electric charge, can travel several centimeters before decaying into a proton (p) and a pion (π). Credit: CDF collaboration 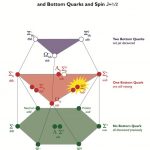 Baryons are particles made of three quarks. The quark model predicts the baryon combinations that exist with either spin J=1/2 (this graphic) or spin J=3/2 (not shown). The graphic shows the various three-quark combinations with J=1/2 that are possible using the three lightest quarks–up, down and strange–and the bottom quark. The CDF collaboration announced the discovery of the neutral Xi-sub-b (Ξb0), highlighted in this graphic. Experiments at Fermilab’s Tevatron collider have discovered all of the observed baryons with one bottom quark except the Lambda-sub-b, which was discovered at CERN. There exist additional baryons involving the charm quark, which are not shown in this graphic. The top quark, discovered at Fermilab in 1995, is too short-lived to become part of a baryon. 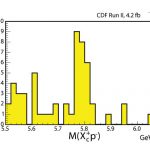 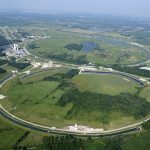 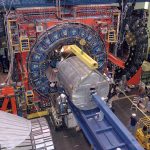 The CDF detector, about the size of a 3-story house, weighs about 6,000 tons. Its subsystems record the “debris” emerging from high-energy proton-antiproton collisions. The detector surrounds the collision point and records the path, energy and charge of the particles emerging from the collisions. This information can be used to find and determine the properties of the Xi-sub-b particle. 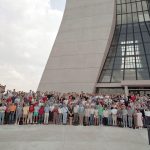 Some of the 500 scientists of the CDF collaboration in front of Wilson Hall at Fermilab. 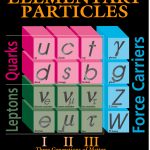 Six quarks–up, down, strange, charm, bottom and top–are the building blocks of matter. Protons and neutrons are made of up and down quarks, held together by the strong nuclear force. The CDF experiment now has observed the neutral Xi-sub-b particle, which contains an up (u), strange (s) and bottom quark (b).