From light bulbs to cell phones, all electronic devices in everyday life rely on the flow of electrons to function. Just as scientists use meters to describe the length of an object or seconds to measure the passage of time, they use amperes, or amps, to quantify electric current — the rate at which electric charge moves through a circuit.

In everyday life, you can safely use a hair dryer or toaster without knowing exactly how many electrons are flowing through it every second. But researchers on the frontiers of physics must have a precise definition of the ampere to detect when experiments unexpectedly deviate from theoretical predictions.

“As technology progresses, lots of measurements that we could not do before become available, and then you can have extremely high-precision measurements,” said Fermilab scientist Javier Tiffenberg. “So you want to have a definition of the unit that is much more precise than whatever you are trying to measure.”

For decades, scientists have struggled to achieve the necessary precision for the ampere. But now, a device called the skipper CCD, developed by Tiffenberg and his collaborators at Fermilab and the Lawrence Berkeley National Laboratory Microsystems Lab, could spark an advance in measurement science. 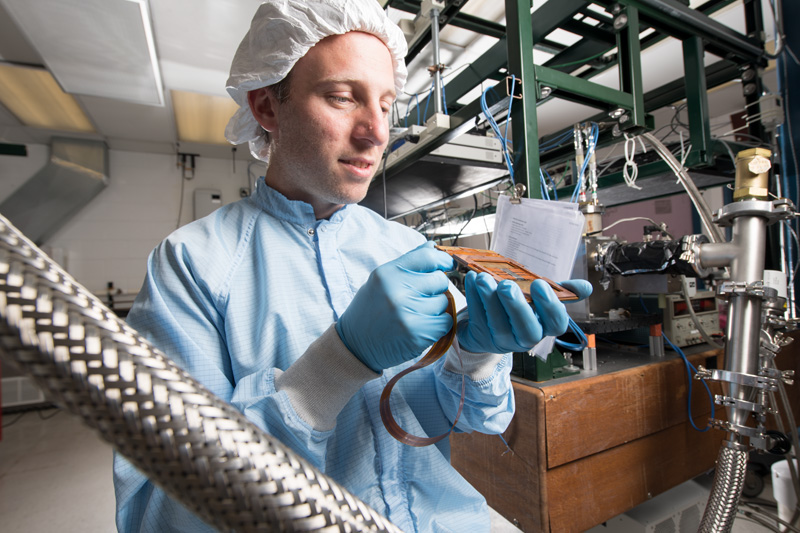 Counting electrons, one by one

Two current-carrying wires exert a force on each other that depends on the distance between the wires as well as the value of the current. Until recently, 1 amp was defined to be the current that would cause two infinitely long wires placed parallel to each other a meter apart to experience a force of exactly 0.2 millionths of a newton per meter of length.

But that definition troubled the scientific community — an experiment requiring infinitely long wires is impossible to perform. Other base units also had unsatisfactory definitions: For example, the kilogram was defined to be the mass of a particular metal cylinder in a vault near Paris. So in 2019, the General Conference on Weights and Measures adopted new definitions for four of the seven base units of the International System of Units, or SI, including the kilogram and the ampere.

“Now the idea is to link all the units to fundamental constants of the universe,” Tiffenberg said. “In the case of the ampere, the link is done through the charge of the electron.”

Yet one problem remains: The charge of a single electron is minuscule. Under the new definition, the current generated by a single electron passing a given point each second is exactly 1.602176634×10-19 amps, or less than 2 tenths of a billionth of a billionth of an amp. Many experts say that an instrument to calibrate the definition of the ampere must generate a current of at least 1 microamp, or 1 millionth of an amp, while counting individual electrons — trillions of them every second. No such device exists yet.

Enter Fermilab’s skipper charge-coupled device, which builds on improvements made in the 1990s to standard CCDs. Pixels connected in a grid store the electrons produced when light hits them. Then the electrons are shuttled to a detector that measures the charge contained in each pixel.

Widely used in digital cameras and scientific instruments, standard CCDs can measure the charge in each pixel only once before losing the information. Skipper CCDs, on the other hand, can measure each pixel repeatedly at a rate of 100 times per millisecond. This allows skipper CCDs, unlike standard ones, to count individual electrons.

“Because these measurements are independent, just by taking many, many samples and averaging them, you are able to reduce the uncertainty on how much charge was sitting in the pixel,” explained Tiffenberg, who won the 2021 New Horizons in Physics Prize and the 2020 URA Early Career Award for his work on skipper CCDs. “In principle, you can reduce this to a number that is arbitrarily small. We have done this to uncertainty levels of 0.06 electrons.”

Tiffenberg and his collaborators began the skipper CCD project with the goal of detecting dark matter, the mysterious substance that makes up about 85 percent of the matter in the universe. Some theories predict that collisions with lightweight dark matter particles would cause individual electrons to recoil, which a skipper CCD could detect with extreme precision.

Now that the ampere is defined in terms of single electrons, researchers at Fermilab are working to scale up skipper CCD technology to reach the current needed for a successful calibration of the definition.

“I’m not saying this is going to be easy, but there’s no theoretical limitation,” said Guillermo Fernandez Moroni, a postdoc at Fermilab working on skipper CCDs. 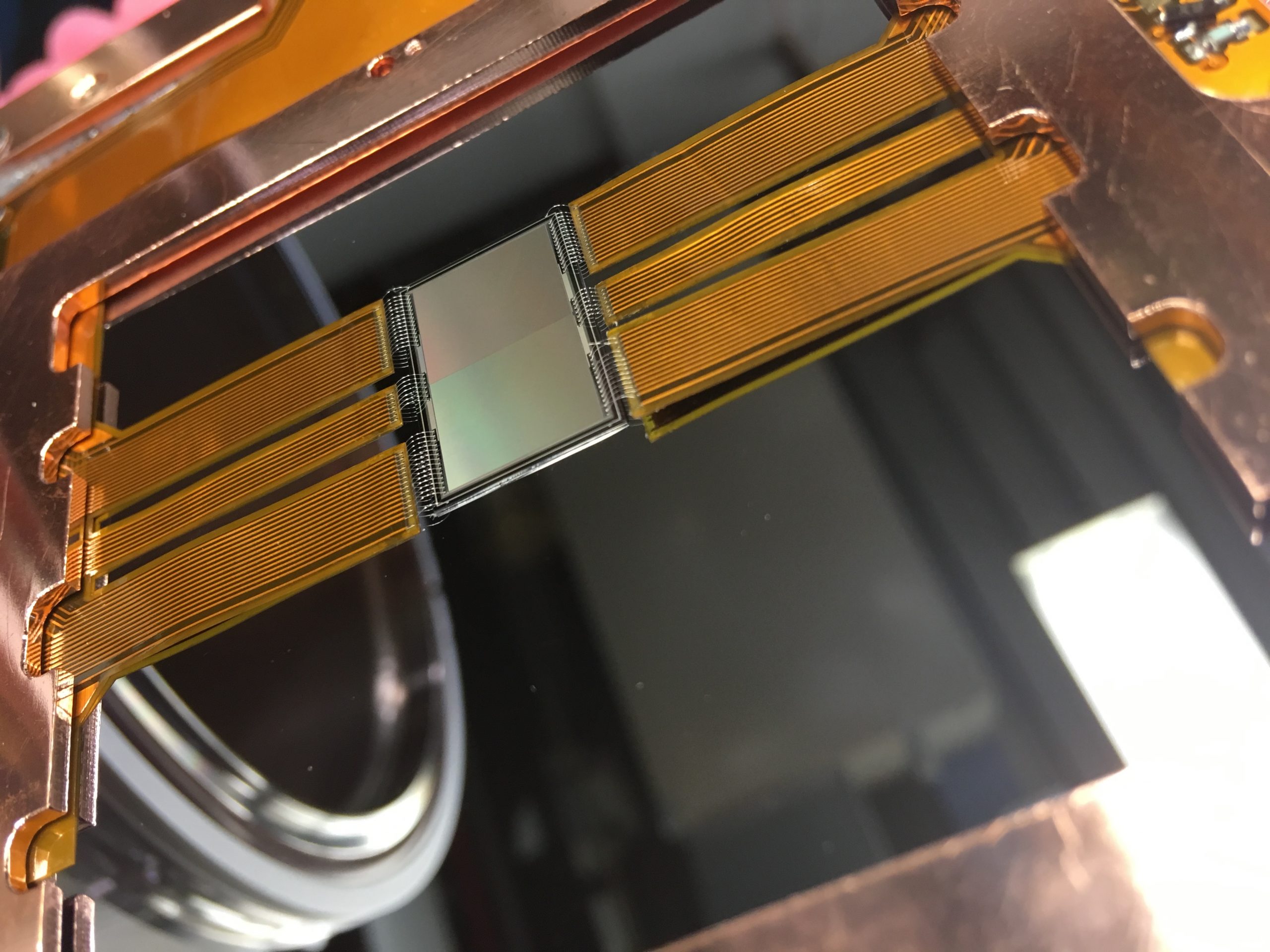 In the 2019 redefinition of the SI units, the General Conference on Weights and Measures provided three candidate methods to calibrate the ampere. The most promising hinges on single-electron transistors, which, like skipper CCDs, can count individual electrons. But the current produced by today’s SETs falls far short of the threshold for a precise calibration.

The first generation of skipper CCDs can already produce a larger current than SETs. Tiffenberg and Moroni expect that future refinements will allow them to build skipper CCDs that generate a current as large as 1 billionth of an amp while still counting individual electrons.

To reach the 1 microamp threshold from there, researchers would need to link together a thousand skipper CCDs. This, too, seems feasible to Tiffenberg. His team’s prototype dark matter detector contains around a hundred skipper CCDs. While SETs must be chilled to a few thousandths of a degree above absolute zero, skipper CCDs can operate at minus 133 degrees Celsius — a balmy temperature by comparison. As a result, scaling up the latter is more practical.

In the meantime, Fermilab researchers are exploring a host of other uses for skipper CCDs.

“We have been adding a lot of people to this effort, and now our days are full of meetings. Every day is a different subject around the skipper,” said Moroni, who received the 2019 URA Tollestrup Award for his skipper CCD research. “Monday and Wednesday are dark matter, Wednesday and Friday are neutrinos, Tuesday is quantum, Thursday is astronomy and satellites. It is very exciting.”

“The applications seem to just pop out everywhere, so it’s a lot of fun,” he said.

Fermilab research on particle detector technology is supported by the DOE Office of Science.