Editor’s note: This is a version of an article originally published by Argonne National Laboratory.

Symmetry — displayed in areas ranging from mathematics and art, to living organisms and galaxies — is an important underlying structure in nature. It characterizes our universe and enables it to be studied and understood.

Because symmetry is such a pervasive theme in nature, physicists are especially intrigued when an object seems like it should be symmetric, but it isn’t. When scientists are confronted with these broken symmetries, it’s as if they’ve found an object with a strange reflection in the mirror.

The proton, a positively charged particle that exists at the center of every atom, displays asymmetry in its makeup. Physicists at the U.S. Department of Energy’s Argonne National Laboratory and their collaborators recently investigated the intricacies of this known broken symmetry through an experiment conducted at DOE’s Fermi National Accelerator Laboratory. The results of the experiment could shift research of the proton by reviving previously discarded theories of its inner workings. 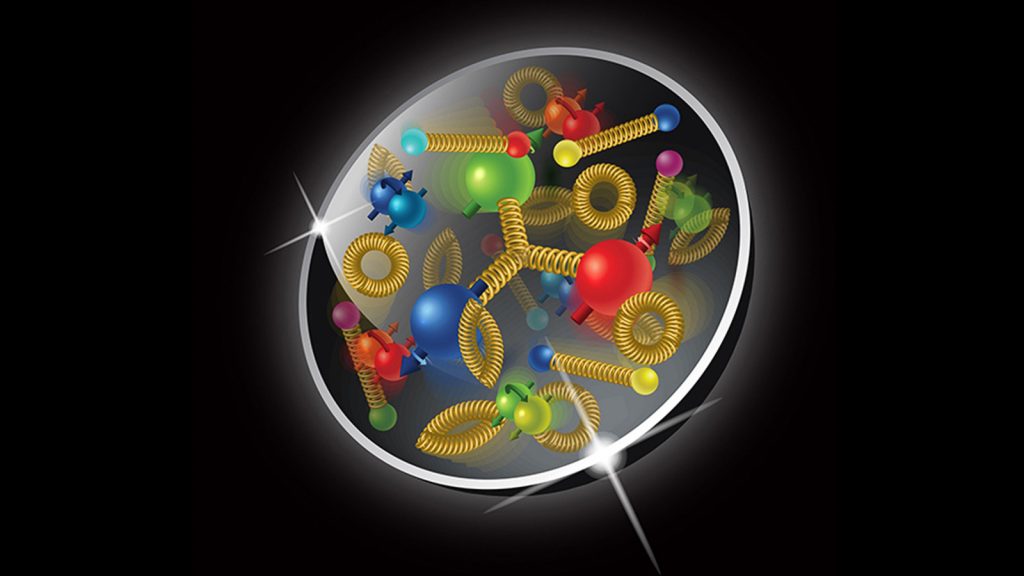 The outcome of this experiment contradicts the conclusion of a study from the late 1990s, also performed at Fermilab. Scientists can now revisit theories to describe asymmetry in the proton that were ruled out by the old experiment.

Understanding the properties of the proton helps physicists answer some of the most fundamental questions in all of science, and by investigating the world at the smallest level, scientists are advancing technology we use every day. Studies of the proton have led to the development of proton therapy for cancer treatment, measurement of proton radiation during space travel and even understanding of star formation and the early universe.

“We were able to look at the puzzling dynamics within the proton,” said Argonne physicist Don Geesaman, “and through this experiment, nature is leading the way for concepts in older models of the proton to get a second look.”

Just as shapes can have symmetry, particles can, too. A perfect circle consists of two semicircles of the same size facing opposite directions, and each type of particle in the universe has an antiparticle of the same mass with opposite electric charge.

“Nature is leading the way for concepts in older models of the proton to get a second look.” – Argonne physicist Don Geesaman

Curiously, at any given time, there are three more quarks than antiquarks: two more up quarks than antiup quarks, and one more down quark than antidown quarks. In other words, these mismatched quarks have no antimatter counterparts. This asymmetry is the reason protons are positively charged, allowing atoms — and therefore all matter — to exist.

“We still have an incomplete understanding of quarks in a proton and how they give rise to the proton’s properties,” said Paul Reimer, an Argonne physicist on the study. “The fleeting nature of the quark-antiquark pairs makes their presence in the protons difficult to study, but in this experiment, we detected the annihilations of the antiquarks, which gave us insight into the asymmetry.” 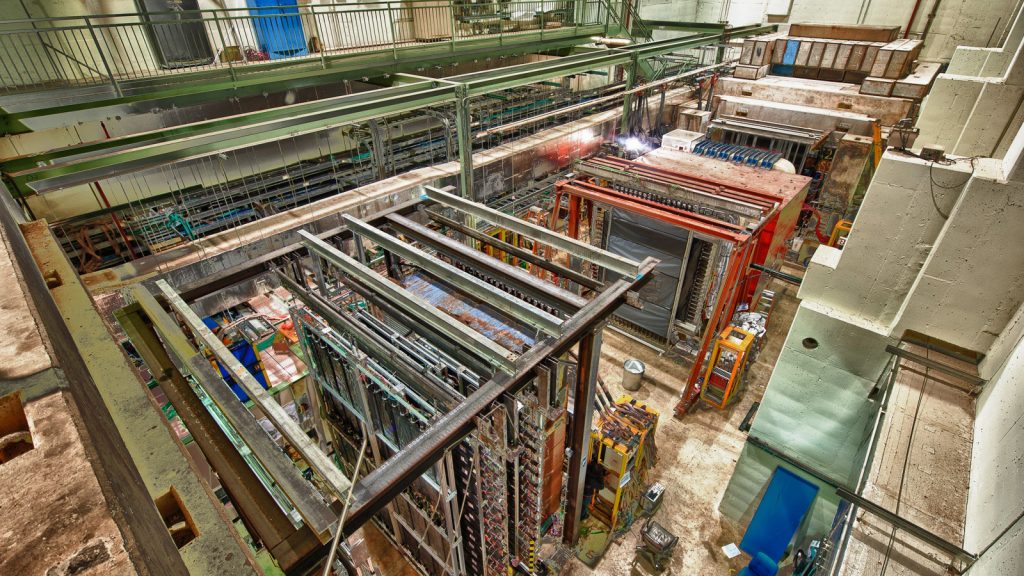 This photo shows the apparatus used in the experiment. The proton beams pass through each of the shown layers, with the iron wall at the end of the path in the upper right corner of the image. Photo: Fermilab

The experiment determined that there are always more antidown quarks in the proton than antiup quarks, no matter the quarks’ momentums. The significance of this result is its contradiction with the conclusion of the Fermilab experiment in the late 1990s, which suggested that at high momentums, the proton’s asymmetry reverses, meaning the antiup quarks begin to dominate antidown quarks.

“We designed the new experiment to look at these high momentums to determine if this change really occurs,” Reimer said. “We showed that there is a smooth asymmetry with no flip of the ratio between antiup and antidown quarks.”

To probe the quarks and antiquarks in the proton, the scientists shot beams of protons at targets and studied the aftermath of the particle collisions. Specifically, they studied what happens after a proton from the beam hits a proton in the target.

When protons collide, quarks and antiquarks from the protons annihilate each other. Then, two new fundamental particles called muons come out of the annihilation, acting as the interaction’s signature. From these interactions, the scientists determined the ratio of antiup quarks to antidown quarks at a range of high momentums. 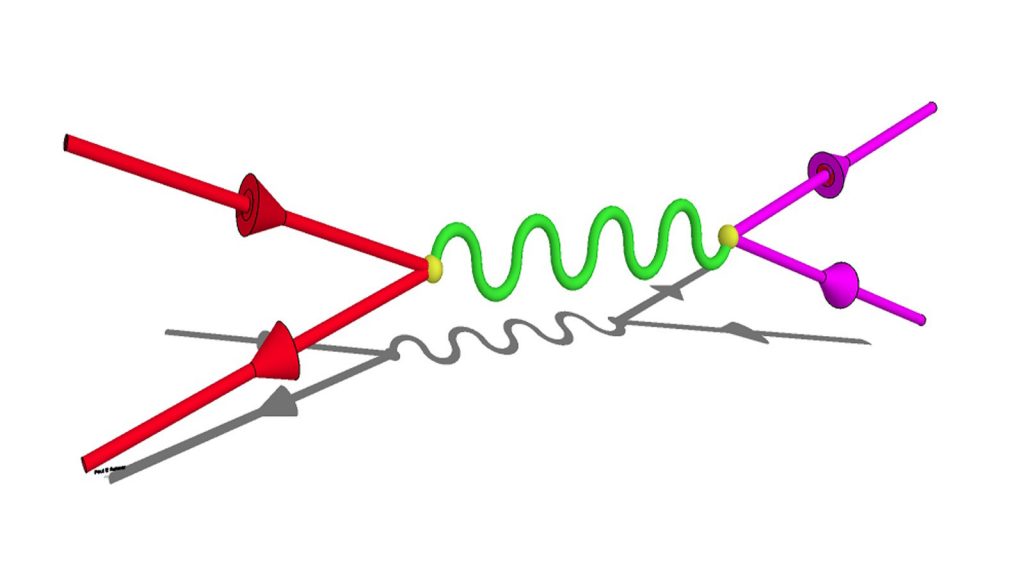 “We chose to measure muons because they can pass through material better than most of the other collision fragments,” Reimer said. In between the targets and their measurement devices, the team placed a five-meter-thick iron wall to stop other particles from passing through and clouding their signals.

When the muons hit the measurement devices at the end of their journey, the scientists reconstructed the quark-antiquark annihilations from the measurements, enabling them to confirm the smooth, consistent ratio of antiup quarks to antidown quarks.

“What we thought we saw in the previous experiment isn’t what happens,” said Geesaman, who was part of both the present and previous studies. “Why, though? That’s the next step.”

Theories that were rejected after they contradicted the previous experiment’s results now give a great description of the new data, and scientists can revisit them with greater confidence because of this experiment. These theories will inform further experiments on asymmetry in the proton and other particles, adding to our understanding of the theory surrounding quarks.

Clues about the nature of quarks in the proton ultimately lead to better understanding of the atomic nucleus. Understanding the nucleus can demystify properties of the atom and how different chemical elements react with each other. Proton research touches upon fields including chemistry, astronomy, cosmology and biology, leading to advances in medicine, materials science and more.

“You need experiment to lead the thinking and constrain theory, and here, we were looking for nature to give us insight into the proton’s dynamics,” Geesaman said. “It’s an interlacing cycle of experiment and theory that leads to impactful research.”

A paper on the study, “The asymmetry of antimatter in the proton”, was published in Nature on Feb. 24.

The work was performed by the SeaQuest Collaboration, which is supported in part by DOE’s Office of Nuclear Physics and the National Science Foundation.