The cosmic microwave background, or CMB, is the electromagnetic echo of the Big Bang, radiation that has been traveling through space and time since the very first atoms were born 380,000 years after our universe began. Mapping minuscule variations in the CMB tells scientists about how our universe came to be and what it’s made of.

To capture the ancient, cold light from the CMB, researchers use specialized telescopes equipped with ultrasensitive cameras for detecting millimeter-wavelength signals. The next-generation cameras will contain up to 100,000 superconducting detectors. Fermilab scientist and University of Chicago Associate Professor Jeff McMahon and his team have developed a new type of metamaterials-based antireflection coating for the silicon lenses used in these cameras.

“There are at least half a dozen projects that would not be possible without these,” McMahon said.

Metamaterials are engineered materials with properties that aren’t naturally occurring. The magic is in the microstructure — tiny, repeating features smaller than the wavelength of the light they are designed to interact with. These features bend, block or otherwise manipulate light in unconventional ways. 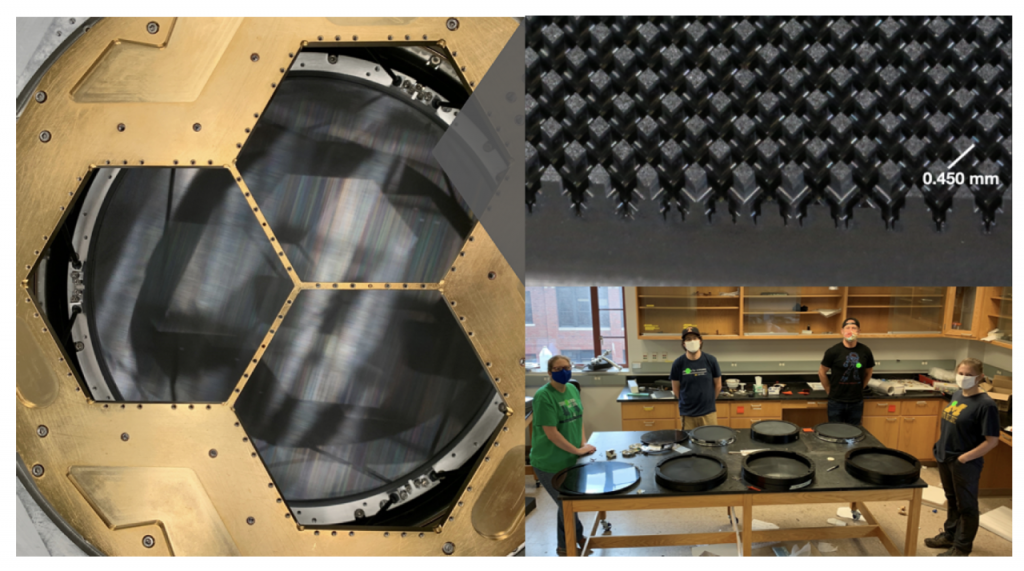 Left: One of the lenses developed by McMahon’s team is installed in a camera assembly. Top right: This shows a close-up view of the stepped pyramid metamaterial structure responsible for the lens’ antireflective properties. Bottom right: Members of the McMahon lab stand by recently fabricated silicon lenses. Photo courtesy of Jeff McMahon

Generally, antireflection coatings work by reflecting light from each side of the coating in such a way that the reflected particles of light interfere and cancel each other, eliminating reflection. For McMahon’s metamaterials, the “coating” is a million tiny, precise cuts in each side of each silicon lens. Up close, the features look like stepped pyramids — three layers of square pillars stacked on top of each other. The pillars’ spacing and thickness is fine-tuned to create the maximum destructive interference between reflected light.

“Light just goes sailing right through with a tenth of a percent chance of reflecting,” McMahon said.

The single-crystal silicon lenses are transparent to microwaves and ultrapure so that the light passing through the lens won’t be absorbed or scattered by impurities. Silicon has the necessary light-bending properties for getting light from the telescope onto a large array of sensors, and the metamaterial structure takes care of reflection. Because each lens is made from a single pure silicon crystal, they can withstand cryogenic temperatures (the detectors have to operate at 0.1 kelvins) without the risk of cracking or peeling like lenses with antireflective coatings made from a different material.

All told, these lenses are arguably the best technology available for CMB instruments, McMahon says.

“It’s not exactly that you couldn’t do the experiment otherwise,” McMahon said, but for the performance and durability demanded by current and next-generation CMB surveys, these lenses are the state of the art — and his team are the only people in the world who make them.

McMahon and his team began developing the technology about 10 years ago when they started working on a new type of detector array and realized that they needed a better, less reflective lens to go with it. The hard part, he says, was figuring out how to make it. Techniques existed for making micrometer-accurate cuts in flat silicon wafers, but nobody had ever applied them to a lens before. The first lens they made, for the Atacama Cosmology Telescope, called ACT, took 12 weeks to fabricate because of the huge number of cuts that needed to be made. Now with improved machines and automation at Fermilab, the process takes just four days per lens, and McMahon hopes they will be able to streamline it even further. 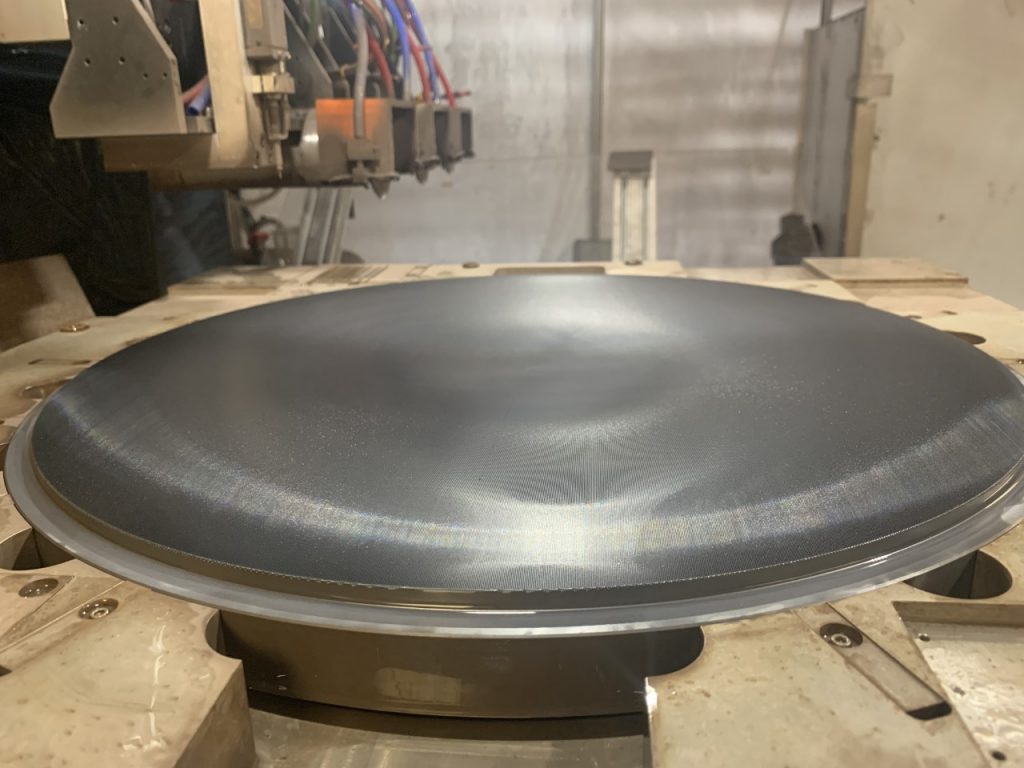 Jeff McMahon and his team have developed new techniques for working with curved lenses instead of flat silicon wafers for CMB telescope lenses. Photo courtesy of Jeff McMahon

Working at the University of Michigan until January 2020, McMahon’s team fabricated about 20 lenses for current CMB experiments including ACTPol, Advanced ACTPol, CLASS, TolTEC and PIPER. They are now producing lenses for the Simons Observatory, which will start collecting data next year. From there, they will begin making additional lenses for CMB-S4 (Cosmic Microwave Background Stage 4), a next-generation project of which Fermilab is a member. CMB-S4 is scheduled to begin collecting data in 2027 using 21 telescopes at observatories in Chile and the South Pole for the most detailed CMB survey yet.

“The second we finish a lens, it’s doing science, and that’s what makes it fun for me,” McMahon said. “All the metamaterial stuff is cool, but at the end of the day I just want to figure out how the universe began and what’s in it.”

McMahon compares CMB-S4 to opening a treasure chest full of gold and jewels. He and the other researchers contributing to it don’t know exactly what they’ll find in the data, but they know it will be valuable. Even if they don’t find primordial gravitational waves — one of the project’s major goals — the experiment will still shed light on cosmic mysteries such as dark energy, dark matter and neutrino masses.

What his team has achieved with their lens technology, McMahon says, is a testament to the outsize effect small efforts can have on big science.

“The endeavor is to begin to understand the beginning of the universe,” he said. “And the way we’re doing it is by figuring out how to machine little features in silicon.”