From AZoMaterials, Feb. 18, 2021: Fermilab scientist Jeff McMahon and his research team have designed a new kind of metamaterials-based antireflection coating for the silicon lenses used in cameras used to capture the cosmic microwave background.

New metamaterials for studying the oldest light in the universe 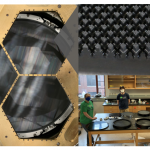 A Fermilab scientist and his team have developed a new way to make antireflective lenses, enabling big discoveries about the cosmic microwave background radiation and the fabric of the universe. 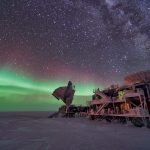 The U.S. Department of Energy has selected Lawrence Berkeley National Laboratory to lead a DOE/NSF experiment that combines observatories at the South Pole and in Chile’s high desert. Fermilab plans to be a key partner on the experiment, called CMB-S4, which aims to undertake an unprecedented survey of the early universe.

From UChicago News, Feb. 6, 2020: Fermilab and University of Chicago scientist Brad Benson and colleagues use a different method to calculate the masses of distant galaxies: the polarization, or orientation, of the light left over from the moments after the Big Bang. In doing so, they demonstrate how to “weigh” galaxy clusters using light from the earliest moments of the universe — a new method that could help shed light on dark matter, dark energy and other mysteries of the cosmos.

Data from antipodal places: First use of CMB polarization to detect gravitational lensing from galaxy clusters 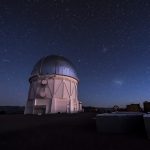 For the first time, a team of scientists has used the orientation of light left over from the early universe to detect gravitational lensing from galaxy clusters – the bending of light around these massive objects. Using gravitational lensing data taken by the South Pole Telescope and the Dark Energy Camera, Fermilab scientist Brad Benson and colleagues have demonstrated a new way to “weigh” galaxy clusters and ultimately shed light on dark matter, dark energy and other mysteries of the cosmos. 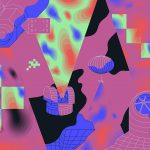 Ground-based experiments designed to study the cosmic microwave background have gotten larger and more sophisticated over time. Now, nearly 200 scientists who have up until this point worked on different competing CMB experiments have joined forces to propose a fourth-generation experiment, the largest ground-based one yet, called CMB-S4.

From Nature Reviews Physics, Jan. 28, 2019: The Dark Energy Survey completed its six-year-mission to map more than 300 million distant galaxies; however, an equally arduous task — analyzing the acquired 50 terabytes of data with a view to understanding the expansion of the universe — is just beginning.

From APS’s Physics, Jan. 29, 2019: On Jan. 9, a handful of researchers with the Dark Energy Survey — one of the most ambitious attempts to probe the dynamics of the universe’s expansion — headed to the control room of Chile’s Blanco Telescope. For one last time, they opened the white telescope’s dome. From their perch overlooking the red Andean Mountains, they set up for a night of observing the southern sky.

The coldest place in the Milky Way? Chicago in January may feel like the coldest place in the universe, but it’s colder at the South Pole. Scientists there are looking out into space and observing microwaves that have been traveling at the speed of light for 13.6 billion years. Once they were ultraviolet rays, but as the universe expanded, their wavelengths stretched, and they became blue, then red, then infrared (heat) and now they are microwaves, which you may have in an oven in your kitchen. Radio waves have even longer wavelengths. A new camera for the South Pole Telescope, called SPT-3G, will aid scientists in creating the deepest, most sensitive map yet of the cosmic microwave background, allowing them to peer more closely into the era of the universe just after the Big Bang.