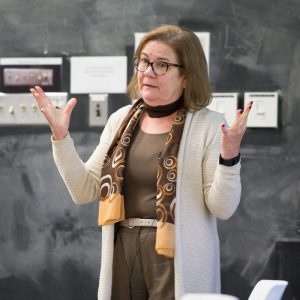 Neutrinos have fascinated physicists like Gina Rameika for decades. Inspired by Ray Davis’ discovery that the number of electron neutrinos created by the sun did not match theoretical predictions – known as the solar neutrino deficit – she has been studying neutrinos for more than 25 years.

On April 1, Rameika assumed the role of co-spokesperson for the international Deep Underground Neutrino Experiment, elected by a collaboration of more than 1,000 physicists and engineers. DUNE, hosted by Fermilab, comprises people from more than 200 institutions in 33 countries.

Rameika was a member of the international team of scientists who discovered the tau neutrino by making the first observation of its interactions with matter using the Direct Observation of the Nu Tau, or DONuT experiment at Fermilab. She served as project manager for building the Main Injector Neutrino Oscillation Search, or MINOS, experiment at Fermilab and headed the Fermilab Neutrino Division from 2014 to 2016.

She has worked on advancing plans for DUNE since the 2000s, many years before the experiment obtained its official name. Since then, she has served in a variety of positions within the DUNE collaboration, and, as the construction coordinator, was instrumental in the success of the single-phase ProtoDUNE detector at CERN. For the past two years, she held the position of resource coordinator within the DUNE collaboration, overseeing finances and staffing, among other duties.

“Gina has enormous experience building and delivering projects, which is extremely important,” said Stefan Soldner-Rembold, who was elected DUNE co-spokesperson in 2018. “You need to have both an understanding of the science, of the physics, and how a project works and how the detectors work and how to manage, and Gina has all these great abilities and has done this before. I’m really excited about having the opportunity to work with Gina.”

DUNE requires the construction of neutrino detectors in two locations: a detector the size of a three-story house to be located at Fermilab in Batavia, Illinois and a gigantic detector, about 60 meters long and more than 20 times larger than existing detectors of its kind, in new caverns a mile underground at the Sanford Underground Research Facility in Lead, South Dakota.

The construction of detector modules has begun. As co-spokesperson, Rameika will coordinate the construction and delivery of the huge number of components being built around the world by 10 consortia formed among the 200-plus DUNE institutions. She might be thought of as the keeper of the big picture for all the puzzle pieces that have to fit together to form the DUNE jigsaw.

The DUNE collaboration published the blueprint for its huge detector in February 2020. One of Rameika’s top priorities is to document — in the form of memoranda of understanding — exactly what each of the consortia will deliver.

“My priority is to work with our international partners to plan and build this detector, which is truly a global effort,” said Rameika, who succeeds outgoing DUNE co-spokesperson Ed Blucher.

DUNE will feature detector modules filled with a total of 70,000 tons of liquid argon. This summer construction crews will start the excavation of the large caverns that will house the detector modules and related infrastructure. Cavern excavation is expected to be completed in 2024.

“A project like this requires a decade from planning to construction,” Soldner-Rembold commented. “We have a lot of shovels in the ground now and people building things. It will take a good part of this decade to reach a point where we can take data.”

Rameika wrote a paper about the solar neutrino puzzle when she was a freshman in college. Now she has the opportunity to build the best neutrino experiment in the world and tackle other questions involving the neutrino, such as the role neutrinos have played in the evolution of the universe.

“This is science and measurements that have never been done,” she said. “We’re building an experiment to uncover the deepest mysteries of the neutrino.”