Construction of the enormous underground facility for the largest international physics experiment in the United States took a major step forward as project managers at the Department of Energy’s Fermi National Accelerator Laboratory are preparing for the project’s next phase.

This month, Thyssen Mining Inc. was awarded the contract to excavate the gigantic caverns for Fermilab’s Long-Baseline Neutrino Facility. The caverns will be located a mile underground, rise up to seven stories tall and cover an area almost the size of two football fields.

Excavation crews will drill, blast and remove approximately 800,000 tons of rock to create the underground space for LBNF. When complete, the facility will house the enormous particle detector for the international Deep Underground Neutrino Experiment, hosted by Fermilab. More than 1,000 scientists from over 30 countries are collaborating on DUNE, which will provide the foundation for international neutrino research for decades to come. 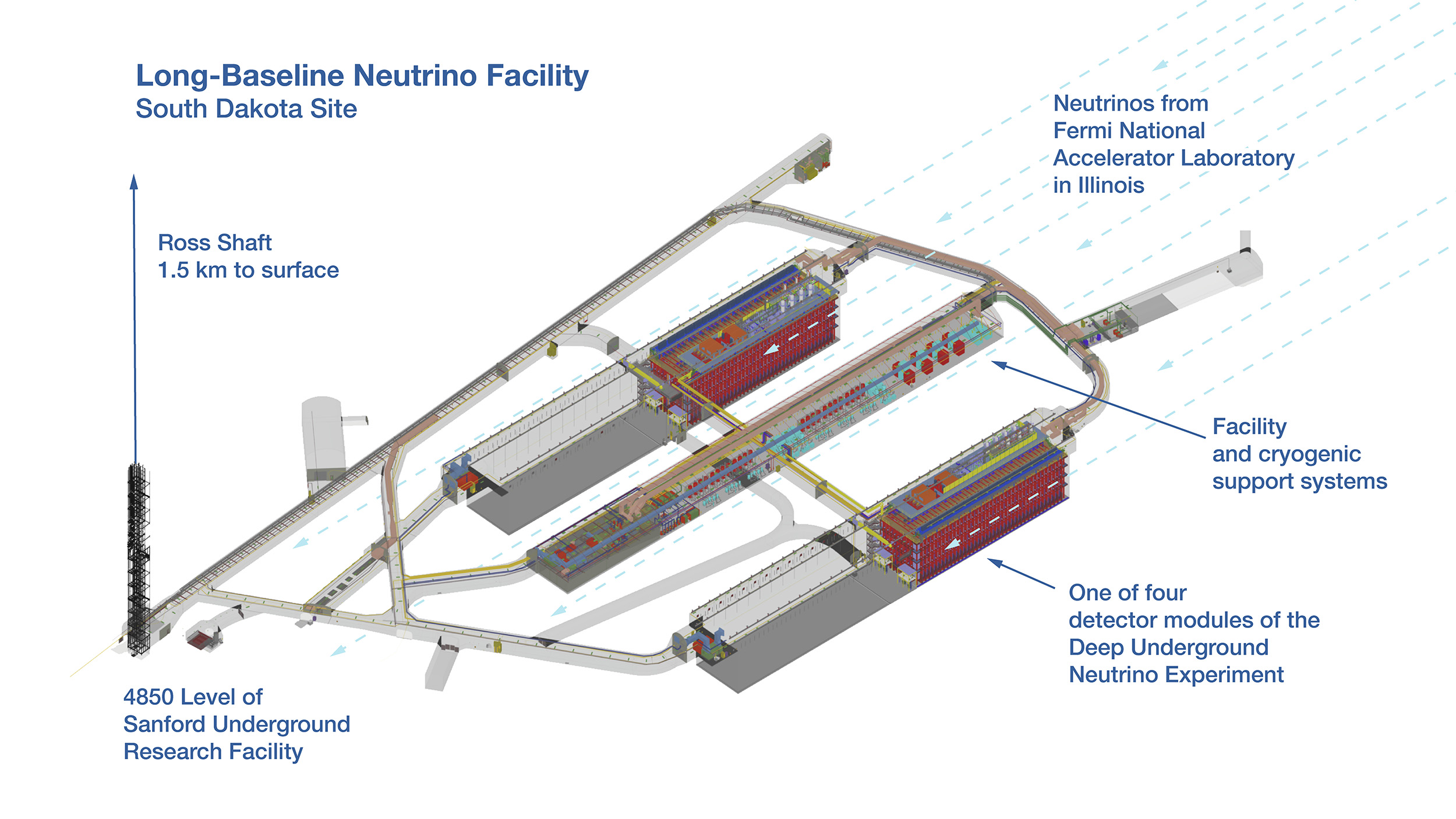 Excavation of the underground complex will take place at the Sanford Underground Research Facility in Lead, South Dakota, in space leased to the Department of Energy for this project.

The excavation will create underground space that will house the experiment as well as laboratory space, a maintenance shop, generator room, spray chamber and a series of interconnecting tunnels, called drifts, to connect the three large caverns in which the DUNE neutrino detector modules and utilities will be installed. The total footprint of the underground facility exceeds four acres (more than 16,000 square meters).

“Award of the main cavern excavation contract is a significant milestone for the LBNF/DUNE project and marks a major step towards the start of world-class science,” said Chris Mossey, Fermilab deputy director for LBNF/DUNE-US. “We’re excited to welcome Thyssen Mining to our team and start work on the next major phase of the project.”

Thyssen Mining has begun the early mobilization period of the contract. This period includes the onboarding of personnel, contracting local vendors and preparing equipment for use underground. On-site construction work will begin in April 2021.

“Our planned labor force for this project is expected to be between 110 and 120 people,” said U.S. General Manager Ryan Moe, Thyssen Mining. “Our team will consist of many of our trained and experienced miners, operators, mechanics, electricians, engineers and managers who have worked on multiple cavern projects within the Thyssen organization. We will in the near term, however, be posting numerous positions locally to fill in alongside with many of these similar roles. As our planning advances, we’ll have better information on the exact number of positions needed.

“Thyssen Mining strongly believes in supporting the community. Our observation in the past is that by engaging with the local community and hiring local employees we benefit from their experiences; and in this community there is a rich tradition of mining legacy. We would seek individuals who have worked locally that may provide knowledge and experience that will help us be successful.”

The excavated rock will be hoisted up a vertical shaft from one mile underground and then transferred 4,200 feet on a system of conveyor belts that was built this year by Kiewit Alberici Joint Venture, the construction manager and general contractor for the LBNF project. When operational, the new rock transportation system will move the rock from the hoist to a former open cut mining pit in Lead, South Dakota.

The conveyor itself should not create any noticeable noise; however, the falling of rock from the conveyor into the open cut may generate audible noise, within the limits permitted by city ordinance. A letter to local residents provides more information.

When the caverns are complete, the LBNF and DUNE teams will install the infrastructure and equipment needed for neutrino research. Using the particle accelerator complex at Fermilab, scientists will send an intense neutrino beam through 1,300 kilometers of rock from Illinois to the DUNE particle detector in South Dakota to understand the role that neutrinos – the most abundant matter particles in the universe – play in our cosmos. This 2-minute video explains in more detail how LBNF and DUNE work.

The short animation below shows a virtual walk through the South Dakota-portion of Fermilab’s Long-Baseline Neutrino Facility, which will house the huge detector of the international Deep Underground Neutrino Experiment.

The Long-Baseline Neutrino Facility and Deep Underground Neutrino Experiment are supported by the Department of Energy Office of Science.