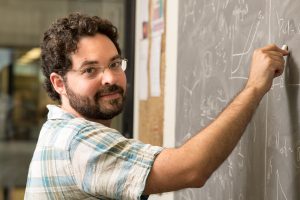 The U.S. Department of Energy’s Fermi National Accelerator Laboratory is a global leader in neutrino science, with cutting-edge experiments on the horizon like the Deep Underground Neutrino Experiment and the Short Baseline Neutrino Program. But behind every great experiment lies a body of theoretical research. Fermilab’s Pedro Machado builds theories and frameworks that push the lab’s neutrino experiments to expand and accelerate their scientific achievement.

Machado won the 2021 Early Career Award from the Universities Research Association, an annual recognition of the most outstanding work for a researcher in the first leg of their career at or in collaboration with Fermilab. Through his neutrino expertise and theoretical models, Machado helps experimental physicists determine which neutrino questions could be worth exploring.

“The success of superb young scientists like Pedro is critical to the future of Fermilab and will illuminate new areas for study,” said URA Executive Director Marta Cehelsky. “His wide-ranging expertise and creative insights make him a valued scientific partner and critical member of the Fermilab team.”

Getting to know neutrinos

Neutrinos are tricky fundamental particles — incredibly light, shockingly abundant, and full of surprises. Scientists know that there are at least three flavors, or types, of neutrinos. They interact rarely, feeling only the weak force and gravity. But there may be more to the story.

Experiments have shown neutrinos behaving in a way not predicted by scientists’ best theory, the Standard Model. They prompt theorists like Machado to tease out possible explanations. One idea is the sterile neutrino, a theoretical type of neutrino that would only interact through gravity. Given the neutrino’s small mass, such a particle would be extremely hard to detect.

To explain these anomalous results, researchers need more experimental data. As part of Machado’s work, he collaborates with experimental physicists to let them know what theorists are thinking and brainstorm how their experiments could answer some of these big questions.

Fermilab’s Short Baseline Neutrino Program, made up of three detectors, may shine light on the anomalies and their interpretations, such as the existence of sterile neutrinos. Machado organizes the regular SBN-Theory meetings, where theoretical and experimental physicists alike gather to compare notes and research goals related to the Short Baseline Neutrino Program. Together, they figured out new directions and potential research goals for the program.

Machado is also interested in a grand question: Why is there so much matter in the universe? During the Big Bang, matter and antimatter should have been created in equal parts, since particles and antiparticles get produced together in pairs. Particle colliders like the Large Hadron Collider at CERN have observed the production of these pairs during high-energy collisions. When matter and antimatter meet, they annihilate each other. Yet the universe around us is far from empty. It begs the question: Do some types of particles behave differently than their antiparticle counterparts? If researchers can understand more about how antimatter interacts, they might be able to figure out why everything exists.

There’s much that’s unknown about neutrinos and their antimatter counterparts, antineutrinos. It’s possible they break the symmetry between particles and antiparticles. They may hold clues to how matter came to dominate the cosmos.

“The violation of the charge-parity symmetry is needed to explain why in the universe there’s more matter than antimatter,” Machado said. “Quarks do that, but it is just not enough. So maybe understanding what happens in the neutrino sector will help us in understanding what happens in the universe. It’s not a one-to-one correlation, but it’s a step forward.”

The international Deep Underground Neutrino Experiment hosted by Fermilab will study how neutrinos and antineutrinos oscillate to get a better understanding of the particle’s properties.

With DUNE, Machado and his collaborators think about what new particles the detectors might be able to find. They consider what types of research questions the data might be able to answer as well. He also studies theoretical questions experimental physicists might run into while trying to get results.

Right now, Machado co-leads a team with Noemi Rocco, another associate scientist in the Fermilab Theoretical Physics Department, which is looking at how neutrinos interact with nuclei. For DUNE, where neutrinos will inevitably interact with nuclei in the detector, their calculations have to be quite precise.

Machado also studies how neutrinos get their mass. For years, physicists didn’t even know neutrinos had mass, but when they discovered oscillation, they knew that in order to oscillate, these particles had to have mass — albeit a minuscule one.

Neutrinos are members of a category of elementary particles known as fermions, considered the building blocks of matter. Most fermions get their mass directly from the Higgs boson, but that is not necessarily the case for neutrinos. A compelling possibility is that neutrinos instead get their mass through what’s called the “seesaw mechanism.” It accounts for neutrino’s tiny mass by proposing a relatively heavy particle or set of particles that give the neutrino its mass in conjunction with the Higgs, on a lighter scale than the Higgs operates. But that’s just one idea. As Machado said, theoretical researchers need to work with experimental physicists to see what their experiments could uncover.

“The mechanism of neutrino mass is something that we don’t know, and we don’t really know exactly where to look,” Machado said. “Since we don’t know, I think we should cast a broad net and try to look for physics as broadly as we can.”

Originally from Brazil, Machado began working on neutrinos during graduate school. He conducted a postdoc at Fermilab before accepting a full-time position at the lab in 2017, where he’s worked on neutrinos ever since.

Machado said he felt honored to receive the URA award, though he couldn’t have done it without his team of postdocs and collaborators.

“I don’t think this is a one-person show,” Machado said. “I could not have gotten the award if I was not in an excellent group, with several collaborators that we work so closely with. It’s very nice to see that we’ve been recognized, that what we get from our work is appreciated.”

This isn’t the first time Machado’s work has been recognized by an award. In 2019, Machado won a U.S. Department of Energy Early Career Award, one of the most prestigious awards in the field for early career scientists, for his work on neutrino-nucleus interactions. It is the same work that’s generating calculations and new physics search strategies DUNE experimentalists will need when the experiment starts collecting data.

Collaboration between physicists across disciplines and over the theoretical-experimental bridge continues as a core value to Machado. He expects to continue working with experimentalists moving forward.

“I like to test ideas that I come up with. I like to see data on my theories. So, whenever there is input from the experimental side on the ideas that we propose, that’s great,” Machado said. “Doing physics alone, for me, is boring. I need people to exchange ideas with. I need to throw in ideas and get some feedback.”