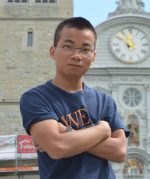 With both an engineering and particle physics background, Zhicai Zhang digs through data from CERN’s Large Hadron Collider while also working on upgrades for the experimental detectors at the very machine that produces it.

His thesis, which addresses the search for new physics and detector upgrades, won the 2021 Universities Research Association Thesis Award. The annual award recognizes outstanding work for a thesis conducted at or in collaboration with the U.S. Department of Energy’s Fermi National Accelerator Laboratory.

“URA is pleased to recognize Zhicai Zhang’s outstanding technical contributions to international scientific efforts related to LHC,” said URA Executive Director Marta Cehelsky. “The insights he demonstrates in his excellent doctoral thesis will make him a critical, ongoing contributor to the field.”

Zhang received an engineering degree in his home country of China before completing his graduate studies in particle physics at Caltech. His Ph.D. dissertation centered on the CMS detector, one of four major experiments at the LHC, and one of the two experiments that co-discovered the Higgs boson in 2012. Fermilab serves as the U.S. hub for the experiment.

Using the powerful detector, Zhang focused his work on particles called W and Z bosons. These fundamental particles carry one of the four forces of nature: the weak force. In particular, he looked for subatomic interactions that reveal “tribosons” — any combination of three W and Z bosons. On rare occasions, proton-proton collisions in colliders like the LHC can produce these triplets.

Zhang developed a machine-learning algorithm and used it to make the first-ever observation of triboson production, a significant step forward for the high-energy particle physics community. His process for discovering the events has already assisted other researchers looking for the phenomenon.

“That process is very rare. It’s very hard to detect,” Zhang said. “That we were able to detect such a process is on its own a very big achievement, because whenever we observe something new, we learn more about the standard model.”

Zhang’s thesis also looked at supersymmetry. In this proposed theory, the fundamental particles would each have a proposed partner that has eluded detection so far. Quarks would have squarks; leptons would have sleptons; and so on. Zhang worked on the neutralino, which is a mix of superpartners of gauge bosons and Higgs boson.

Supersymmetric particles haven’t been detected, but part of Zhang’s work set limits on the potential masses of neutralinos, narrowing down where future researchers should search. Supersymmetric particles might emit photons when they decay, and because longer-lived particles emit photons later, Zhang worked backwards. By looking at how much time has elapsed between a collision and the detection of a photon, Zhang could estimate the potential life span of the neutralino, and into what mass range it might fall.

“The combination of both finding something rare that we expect to see and excluding something that we didn’t expect to observe adds credibility to Zhang’s work,” said Chris Stoughton, Fermilab scientist and URA Thesis Award committee chair. “His thesis is well-written and complete.”

The final component of Zhang’s thesis was engineering work on the CMS detector. Researchers are upgrading several systems to better handle the deluge of collision data expected from planned improvements to the LHC. Zhang helped test the sensors for a new timing detector, which will allow researchers to determine the precise time a particle arrives in the detector. Given his engineering background, he enjoyed the opportunity to work on a more hands-on project.

“I really like to build stuff,” said Zhang, who was based at Fermilab during the last year and a half of his graduate program to work on the timing detector. “Whenever you build something and it works as expected in a complicated system, it’s exciting, and I really enjoyed that process.”

“His thesis is a tour de force in its depth, comprehensiveness and innovative approaches,” said Harvey Newman, Zhang’s thesis advisor at Caltech. “Zhicai Zhang is a rising star as a young experimentalist, with a striking record of accomplishments at a young age, and multiple contributions to the present and upcoming physics program.”