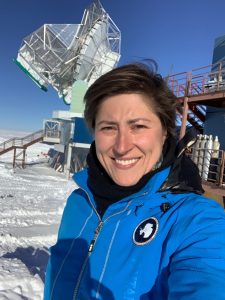 How long have you worked at Fermilab?

I started in August/September 2016, so six years if I’m doing the math correctly.

What do you do at Fermilab?

I’m an observational cosmologist with the Cosmic Physics Center. I work as a postdoctoral researcher on the South Pole Telescope; I do a lot of the control software and data analysis software work for SPT. We have a pretty complicated data pipeline. The telescope lives at the South Pole. We can’t get all our data back all at once, so there’s a lot of online data processing that we have to do. I handle a lot of that work and just making sure we don’t lose anything on the way here.

How did you first get interested in studying physics and the Cosmic Microwave Background?

I’ve always been sort of—it’s going to sound really cliché—fascinated with the big questions. When I was an undergrad, I did an exchange program in the U.K. with Cambridge University, and I did a project that involved looking at foregrounds. The Cosmic Microwave Background itself is actually well outside our own galaxy. There’s a lot of foregrounds in the way that are from within our own galaxy or other galaxies nearby, but mostly the ones in our own galaxy. I did a software project that was trying to work on methods of separating the foreground sky from the CMB, and it was interesting because it was my first big software project that I worked on. At the time, I was also working in a dark matter lab and building some instrumentation, and I wanted to combine those two interests.

When I went to grad school, my advisor basically roped me in and said, “I’m working on this telescope that’s going to be flown off the coast of Antarctica. Do you want to work on this telescope and study the Cosmic Microwave Background?” And I was like, “Yep, sounds great; sign me up.” That was a really cool project to work on: It’s called Spider; we launched it in January 2015. I’ve been doing Cosmic Microwave Background instrumentation for telescopes since then.

Does your work involve going to the South Pole to work on the telescope?

I went down to Antarctica to McMurdo Station for Spider, and then when I started this postdoc, I started going to the South Pole directly to work on SPT. For the first five years, it was just the summer season, so it’s a November-to-February timeframe when the weather is warm enough to be able to fly planes in and out. That’s when we do a lot of summer maintenance things, get our computing systems up and running, do upgrades to the electronics and hardware that we have there. It’s a really busy time, but really fun for the grad students to get to go down there and work with all of that.

Last year, I thought it would be a good time to do a whole year, so I took a leave of absence and spent the whole year, including the winter, at the South Pole. The station was closed with just 39 of us there from mid-February to mid-October 2021. It was myself and Matt Young; the two of us were the caretakers for SPT for the winter. We made sure the telescope kept running, all the data kept coming in, and nothing broke—pretty solid winter.

What is the most rewarding part of your job?

The fact that this telescope is at the South Pole is super interesting for the public, so it’s really fun to be able to tell people about that and to get to go down there and show people what it’s like. The science is super interesting, and I find it pretty fun to engage with the public, talking about the Cosmic Microwave Background. It’s not too complicated to explain, even to kids.

Is there anything you find challenging in your work?

The hardest part of the project is that it’s so remote, so we have a lot of systems down there that are monitoring everything and people onsite year-round. Sometimes you run into a problem when you’re there that you can’t solve and you need to communicate with people up north about that. There’s a lot of preventative things that we try to do to make sure that the winter-overs are prepared to handle problems that come up. The trickiest thing to me is anticipating what could go wrong and fixing it before it becomes a real problem. I spend a lot of time making sure that if we run into a problem with the way the telescope is moving or the way we’re scheduling things that we nip it in the bud.

What do you like best about working at Fermilab?

Fermilab has a lot going on and good resources for getting stuff done. We’ve got a big space, and we’re able to do a bunch of device testing, hardware work and cryogenics. There’s also a lot of exposure to what other people are working on, so you’re not super isolated from the rest of the community that way.