Each with a pair of big brown eyes and encapsulated in a thick mat of hair are the American plains bison that roam the U.S. Department of Energy’s Fermi National Accelerator Laboratory’s 80-acre pasture. Since the introduction of the herd in 1969, these large mammals have become a cornerstone of the lab’s culture. A living homage, the bison represent the former frontier of the Midwestern prairie and symbolize the scientific frontier Fermilab researchers explore in the field of high-energy physics.

Since Fermilab’s first director, Robert Wilson, established the bison herd at the lab, locals and visitors alike have enjoyed seeing these magnificent animals. Often captured in photos or now seen through the virtual bison cam, the iconic bison is the lab’s unofficial mascot. During the spring, you might lay eyes on an adult female caring for her calf, otherwise known as a “red dog,” or in early winter catch a glimpse of light snowfall collecting atop the mammal’s brown fur. It’s especially exciting any time of year when the herd grazes near the fence line along Pine Street, affording closer viewing and better photo opportunities.

Serving as a symbol for abundance and manifestation, the bison was declared the national mammal of the United States six years ago.

Let’s celebrate our national mammal and take a look at Fermilab’s bison herd over the years.

On April 28, 2016, Congress passed the National Bison Legacy Act, recognizing this iconic animal as a symbol of historical significance. President Obama signed it into law on May 9, 2016, and the bison officially became the national mammal of the United States. 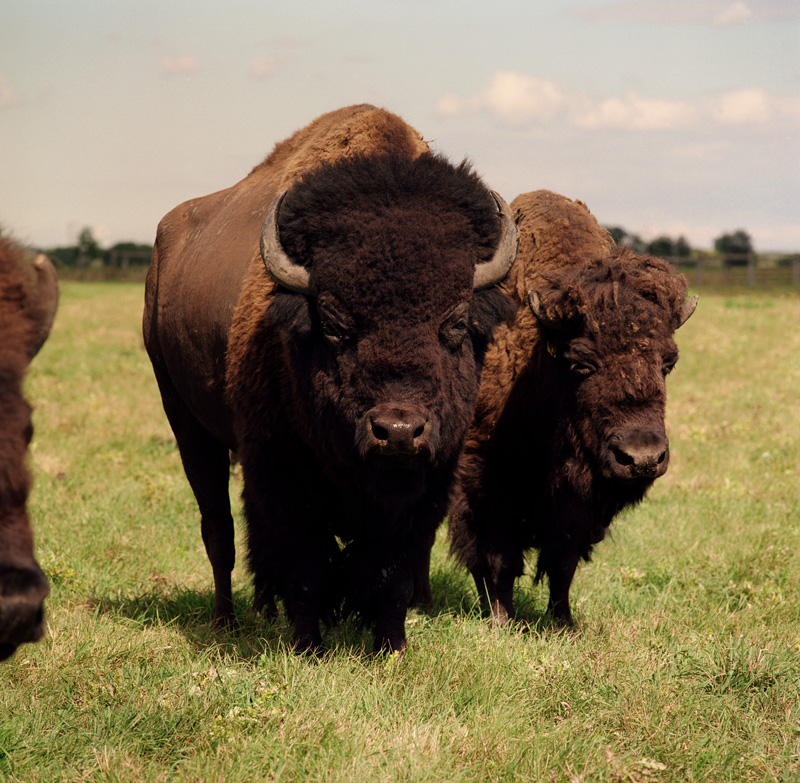 The lab purchased its first bison in 1969. Fermilab received its first bull from a breeder in Cheyenne, Wyoming, and added four cows and their calves from another breeder in Longmont, Colorado. 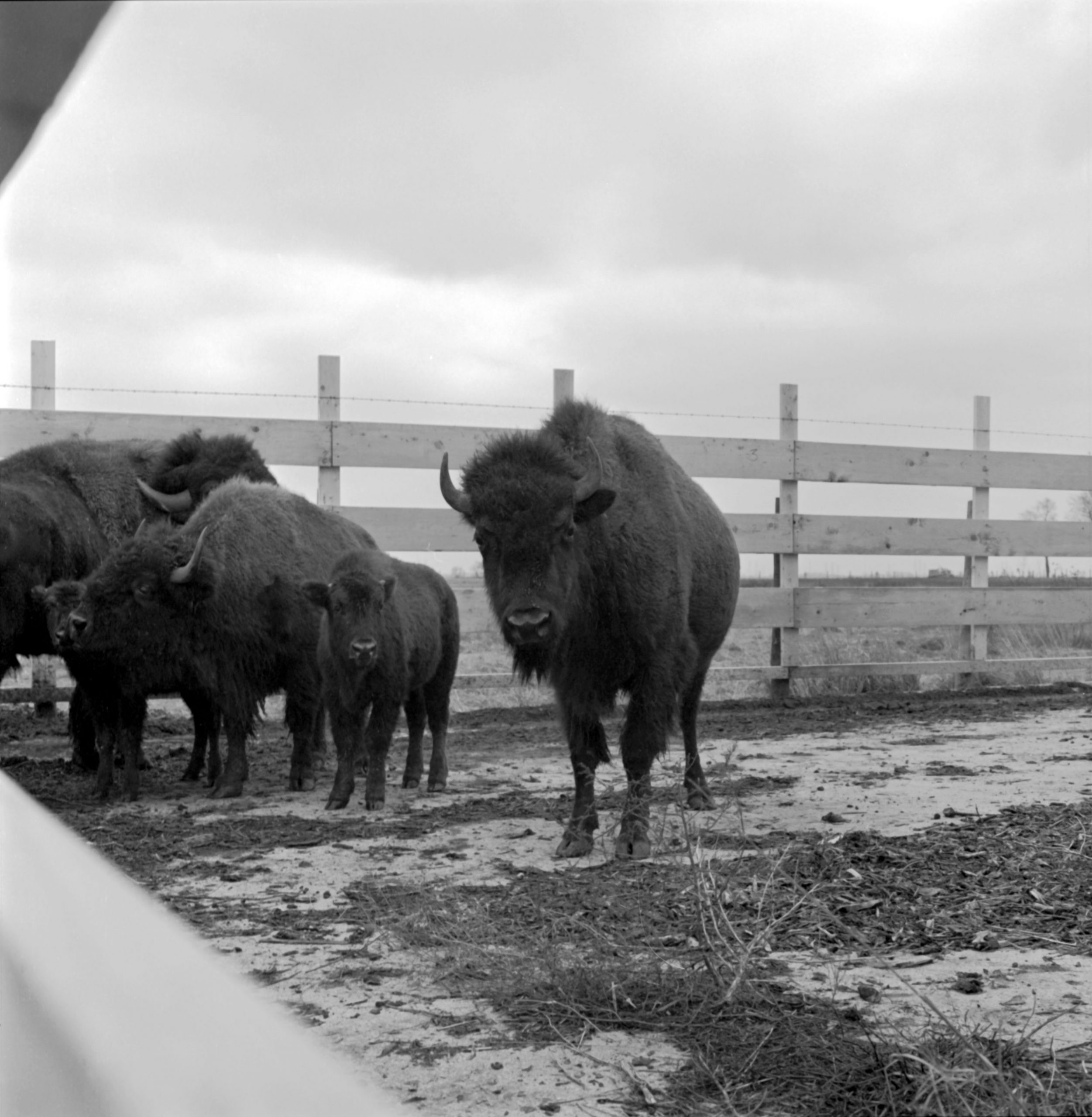 The purpose of Fermilab’s bison herd is to preserve and restore a bit of Illinois heritage that was here some 200 years ago. Robert Wilson, Fermilab’s first director, established the bison herd in 1969 as a symbol of the history of the Midwestern prairie and the lab’s pioneering research at the leading edge of particle physics. The herd gathers in front of the red barn in December 2010. 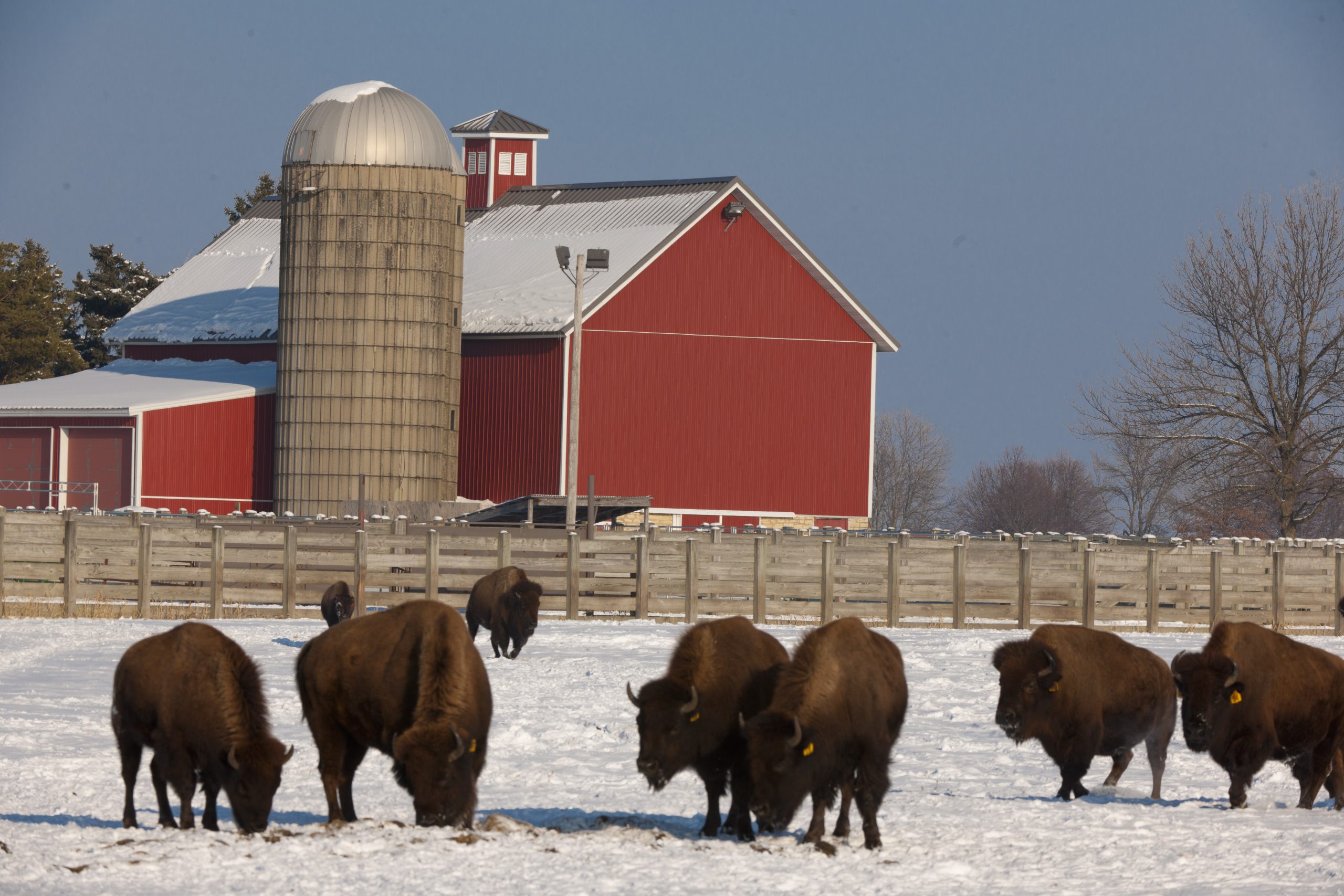 By the late 1880s, the plains bison population in the United States was decimated, driven nearly to extinction. Thanks to conservation efforts, like those at Fermilab and elsewhere, the bison has rebounded. It is no longer an endangered species, but conservation of the bison genome is still a federally recognized priority. Some of the Fermilab herd in 2016. 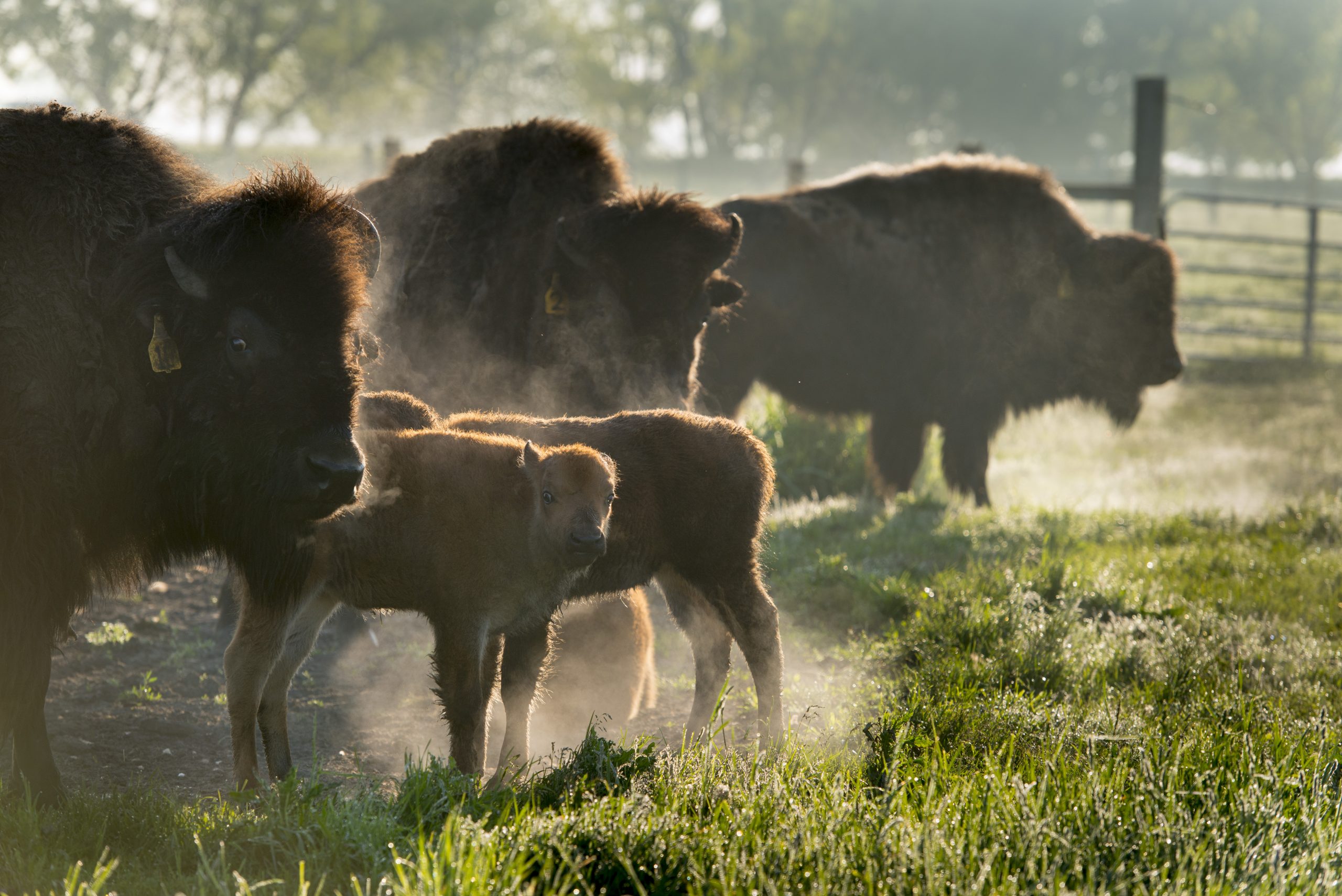 Mid-November 2018 started off with a dusting of snow and a beastly move-in of two new bison bulls to Fermilab. Since 1971, the herd’s genetic diversity has been augmented by rotating the bulls, selling them and bringing in new bloodlines every five to seven years. In 2016, the lab learned the Fermilab bison herd is 100% pure bison with no cattle genes in the mix. 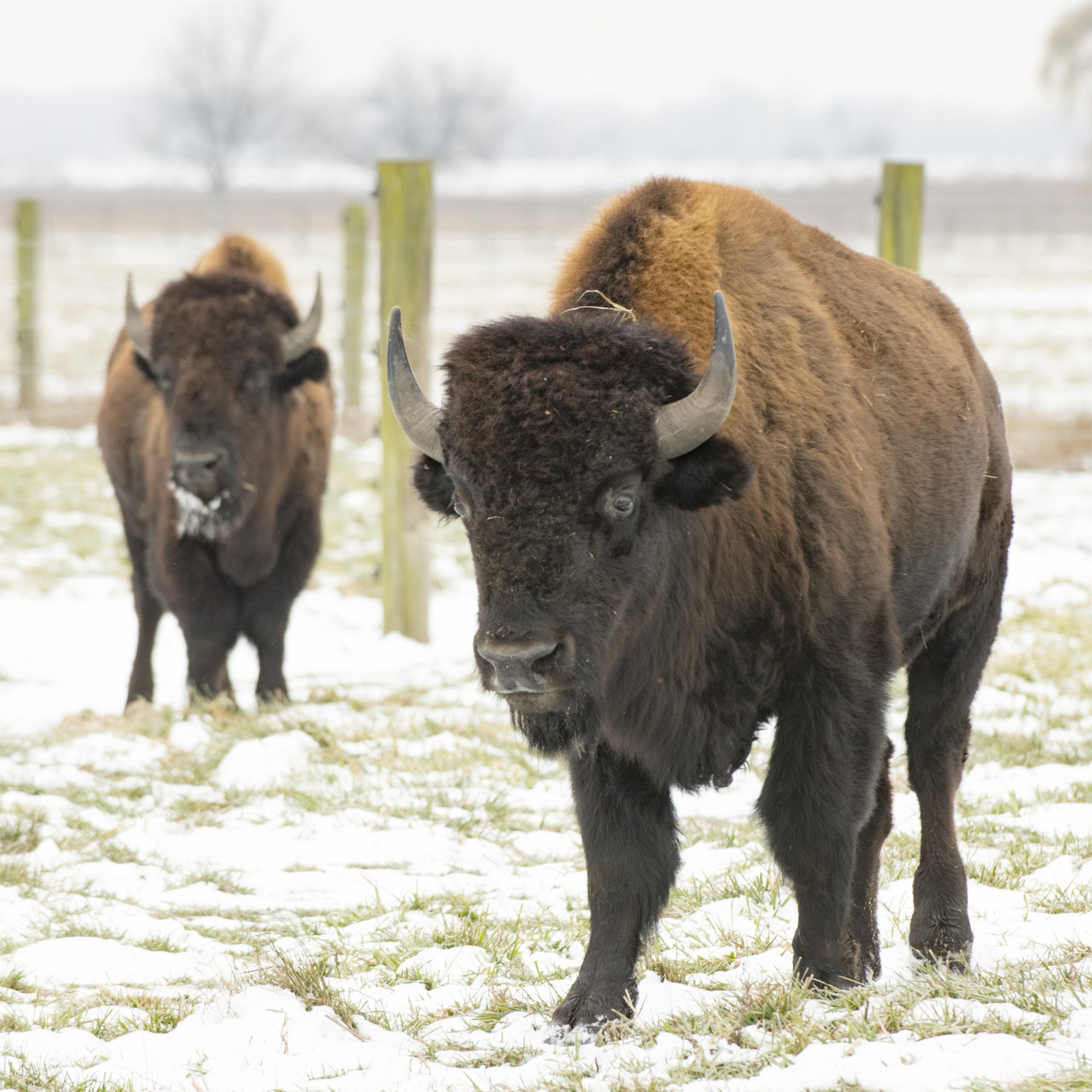 In 1973, the Fermilab herdsmen began a tagging and sorting program, designed to help keep the bison herd healthy. Note the tag on the bison’s ear. 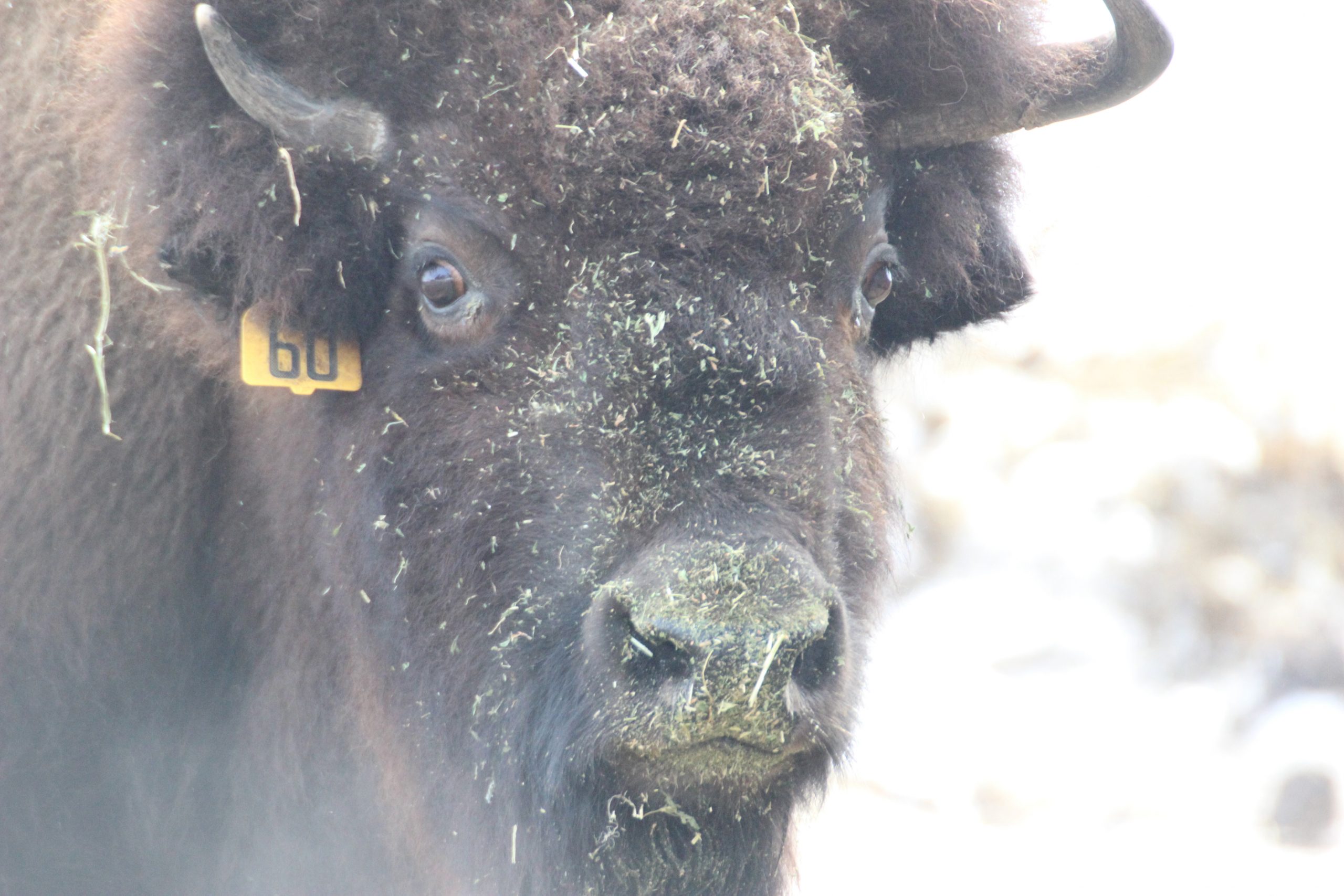 Each spring, Fermilab’s first baby bison of the year is widely heralded. In a tradition followed since the herd’s creation, the herdsman notifies the lab director and other leaders about its arrival and the status of the mother. Newly birthed, this baby bison takes the spotlight on April 20, 2019, as the first newborn of the year. 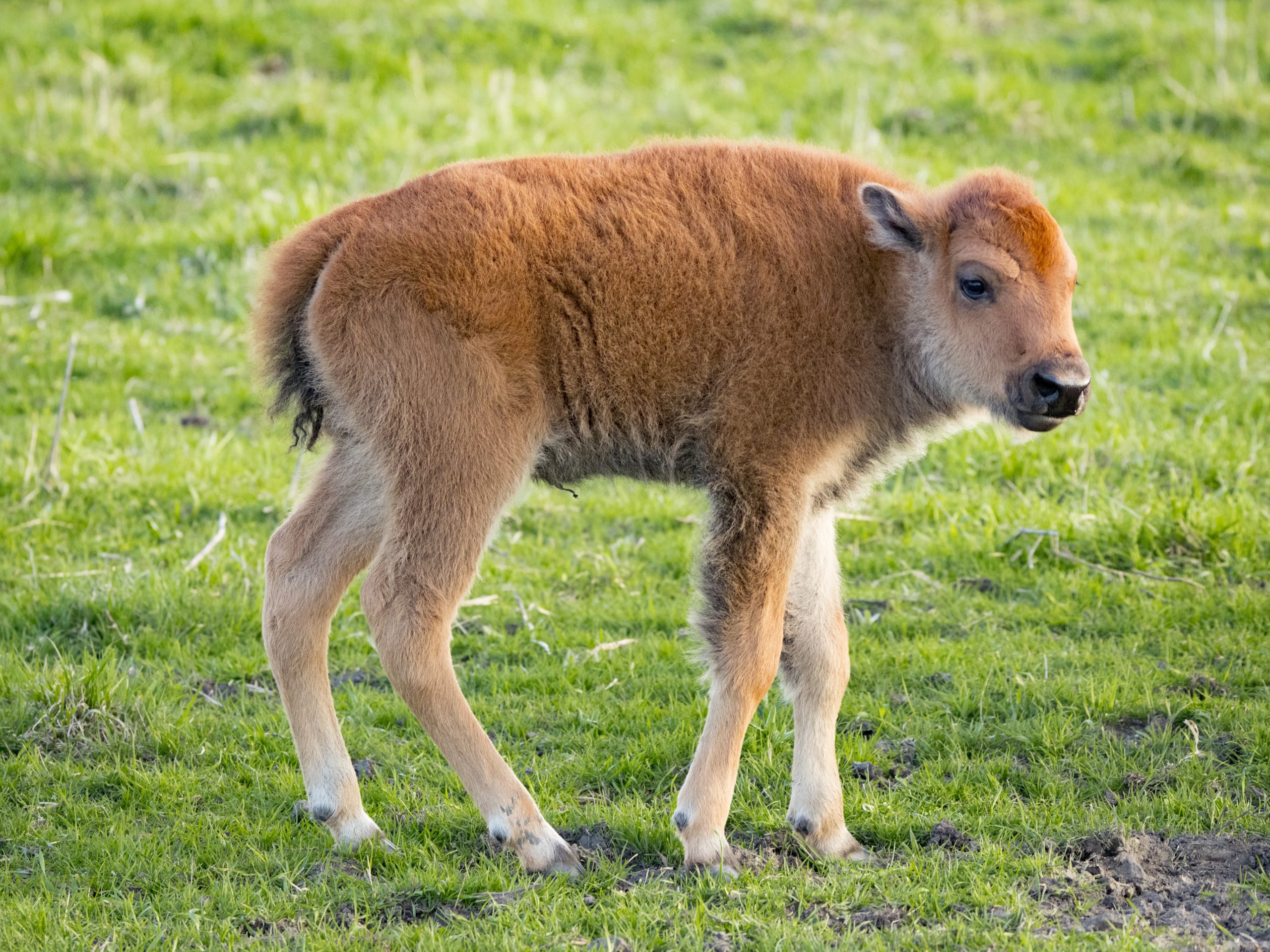 The largest land mammal in North America, bison are powerful creatures. Bulls like this one can weigh up to 2,000 pounds, while cows are smaller at 1,000 pounds. Bison range in height from 5 to 6 feet tall and 10 to 12 feet long. Don’t let their size deceive you: Not only are they fast — bison can run up to 35 miles per hour! — they’re also nimble and can jump up to 6 feet vertically and 7 feet horizontally. 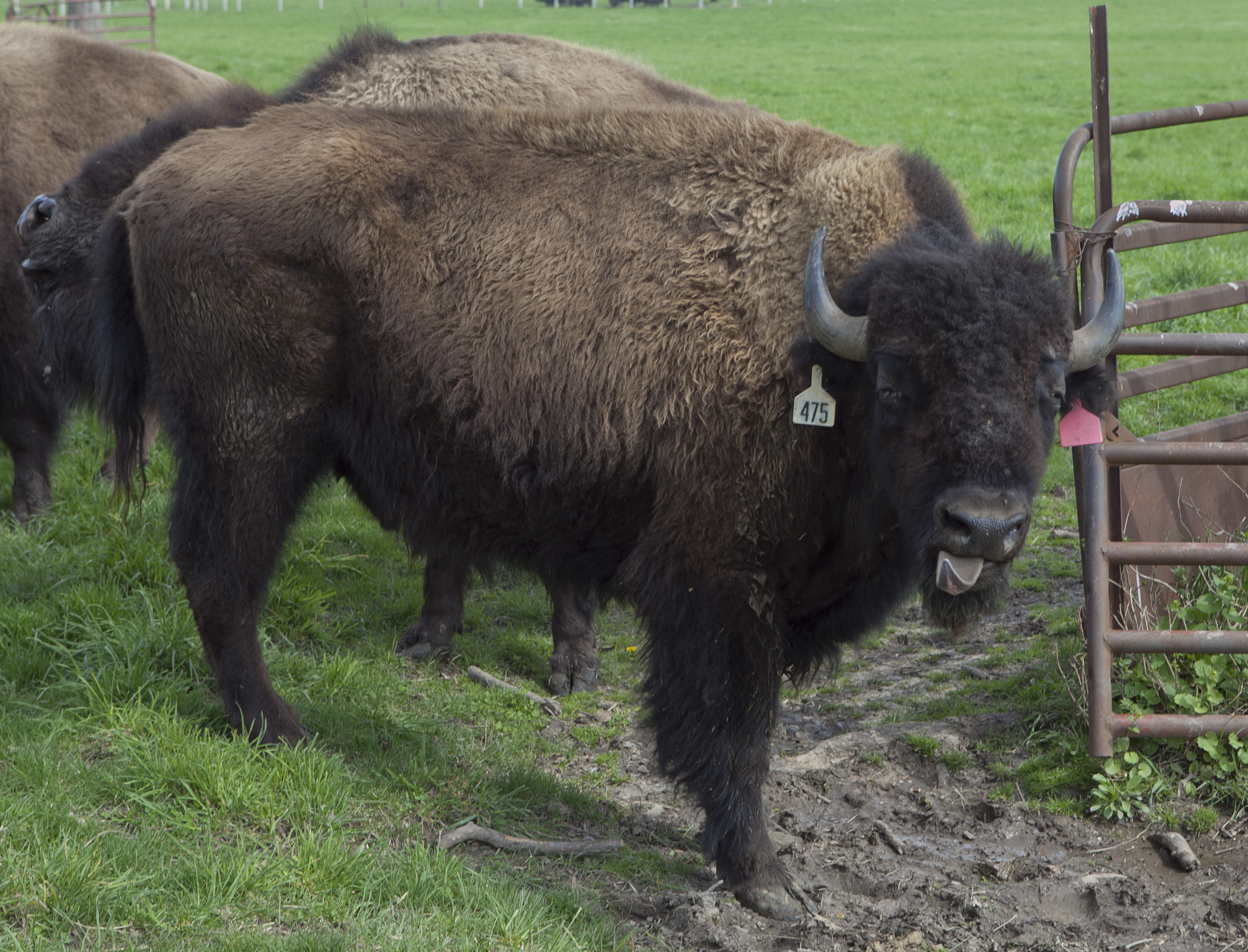 Bison are uniquely built to endure bitter cold and deep snows. In 2015, the lab experienced a heavy snowfall. Trudging through the thick snow may have winded this large bison, who stuck out his tongue to force more air into his lungs. 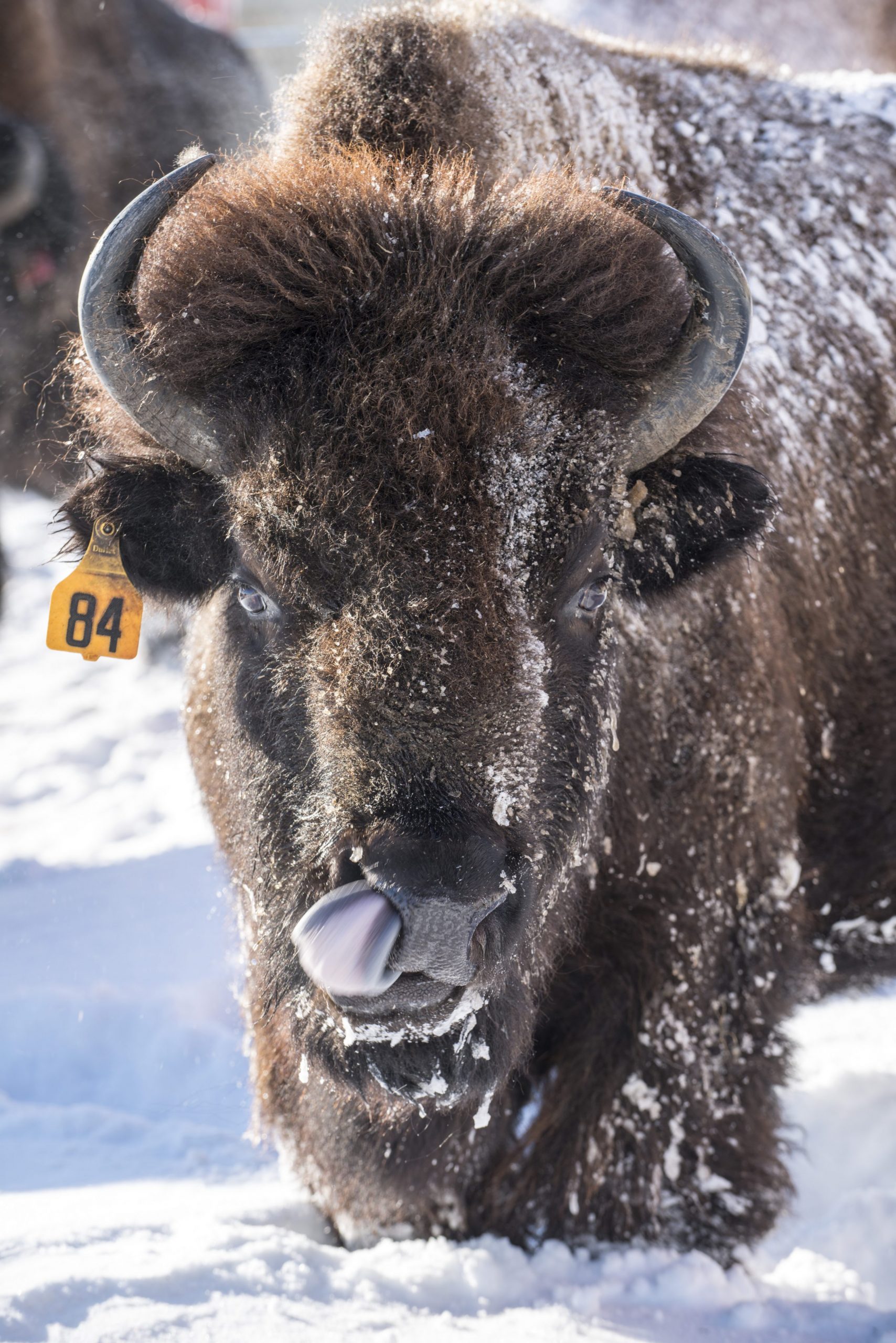 Nearly 30 bison comprised the herd in spring 2022, and 23 calves were born this year, starting in April. 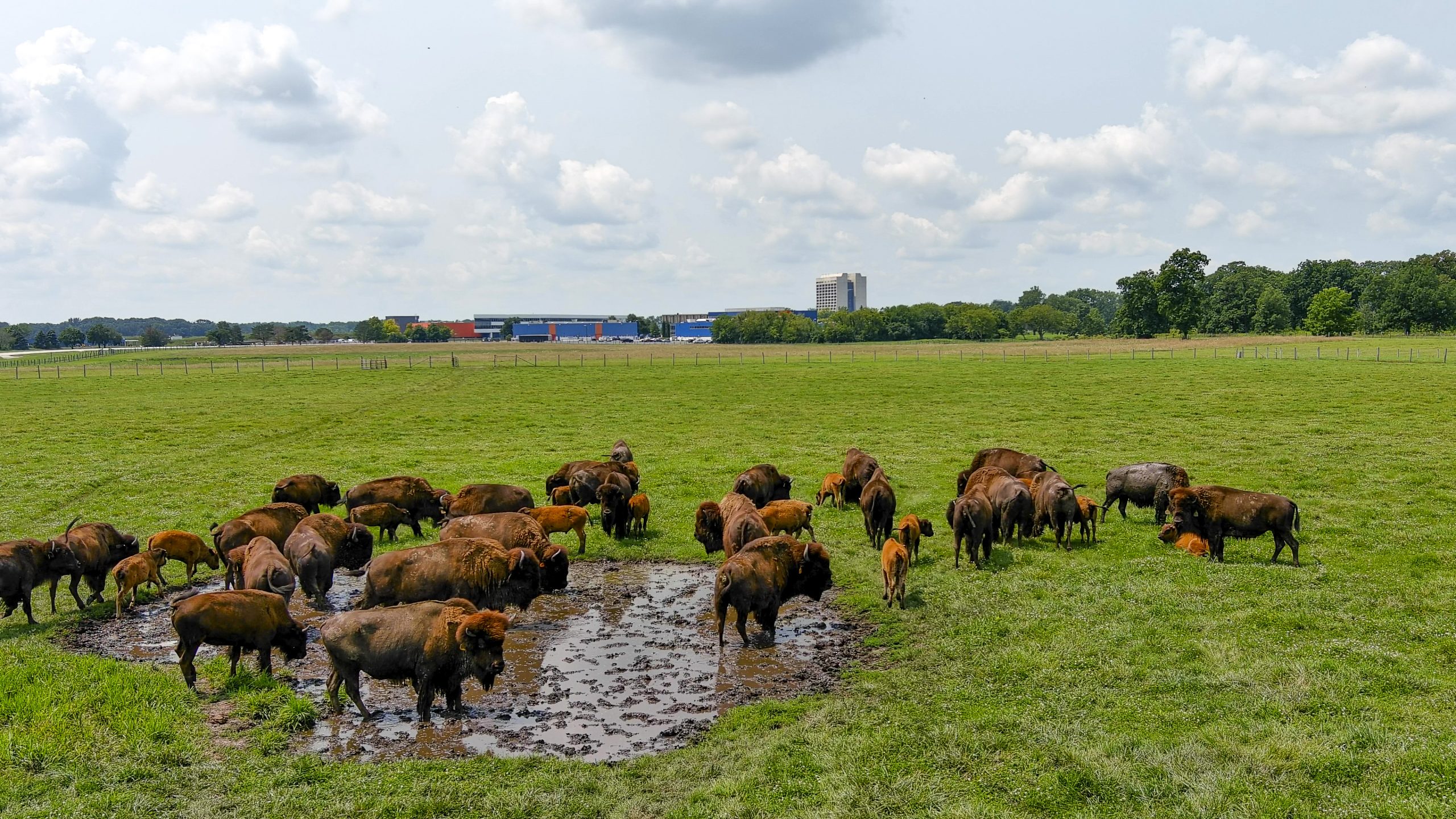 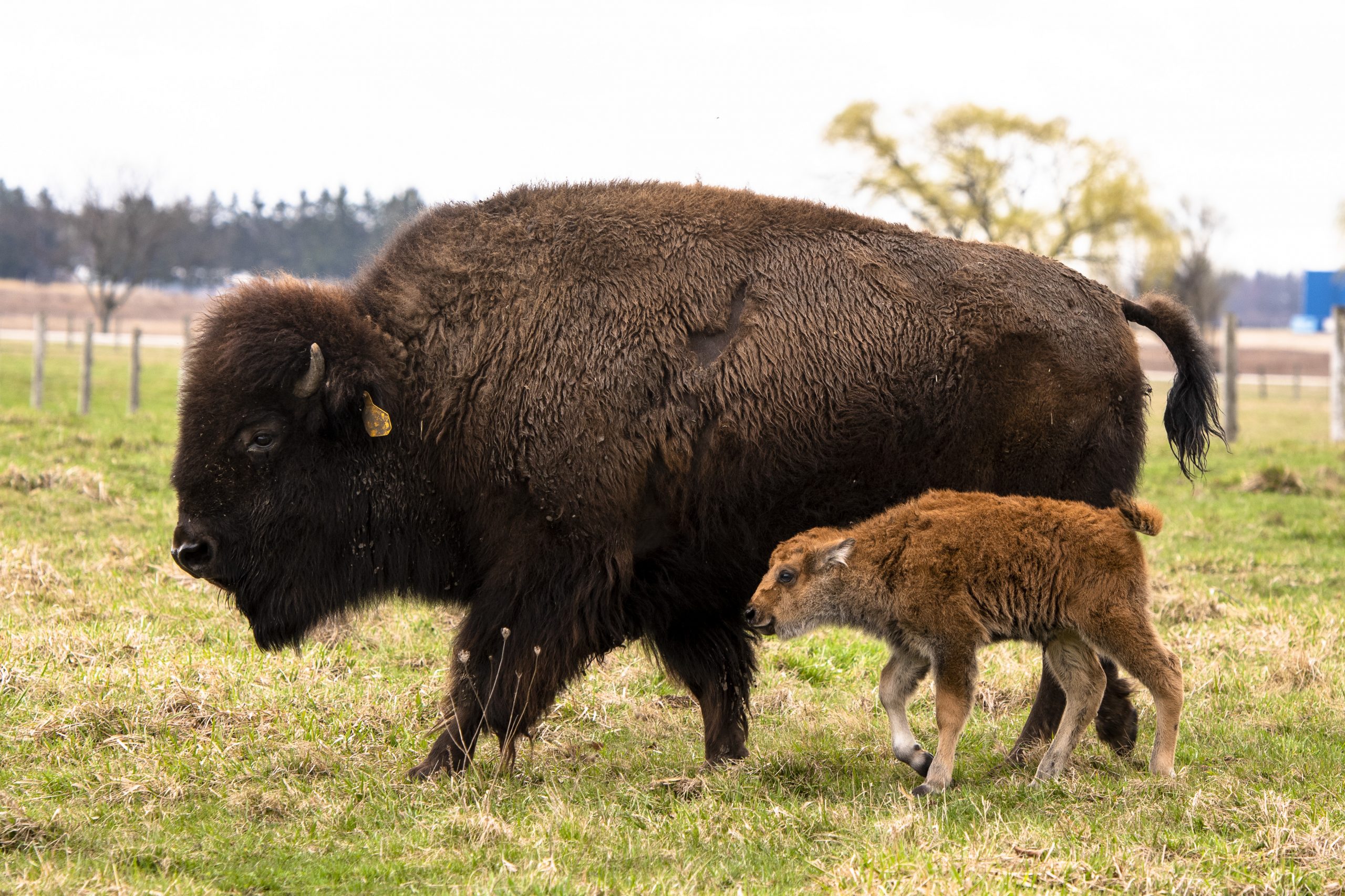 Recently born baby bison huddle near the safety of their mothers circa 1994. Bison cows are fiercely protective of their young. 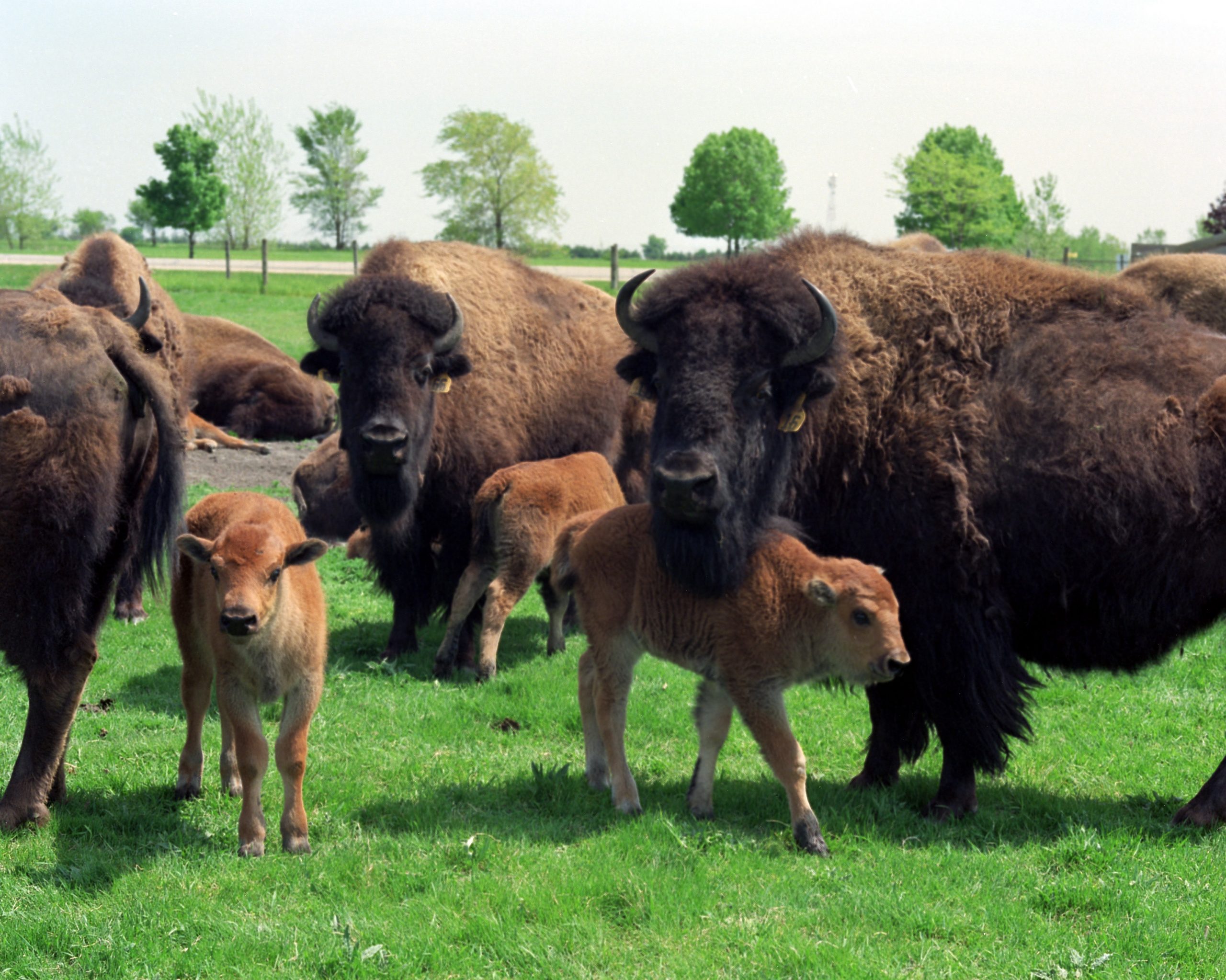 While grazing in the sun, a mother bison minds her calf in May 2011. She’ll feed her baby until it weans at about 6 months of age. 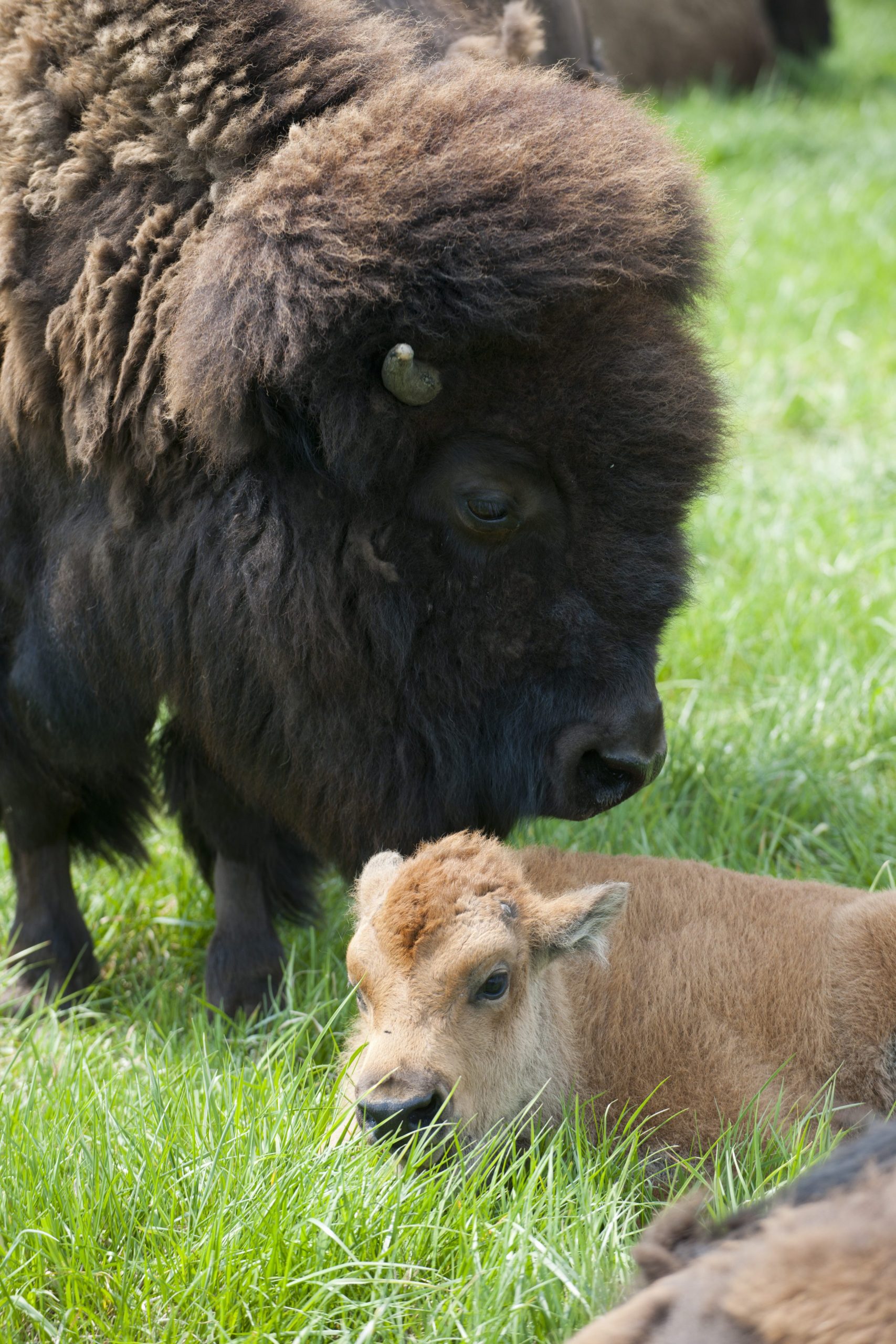 Fermilab’s bison herd continues to attract visitors young and old. A children’s tour takes place at the Buffalo Barn in 1983. 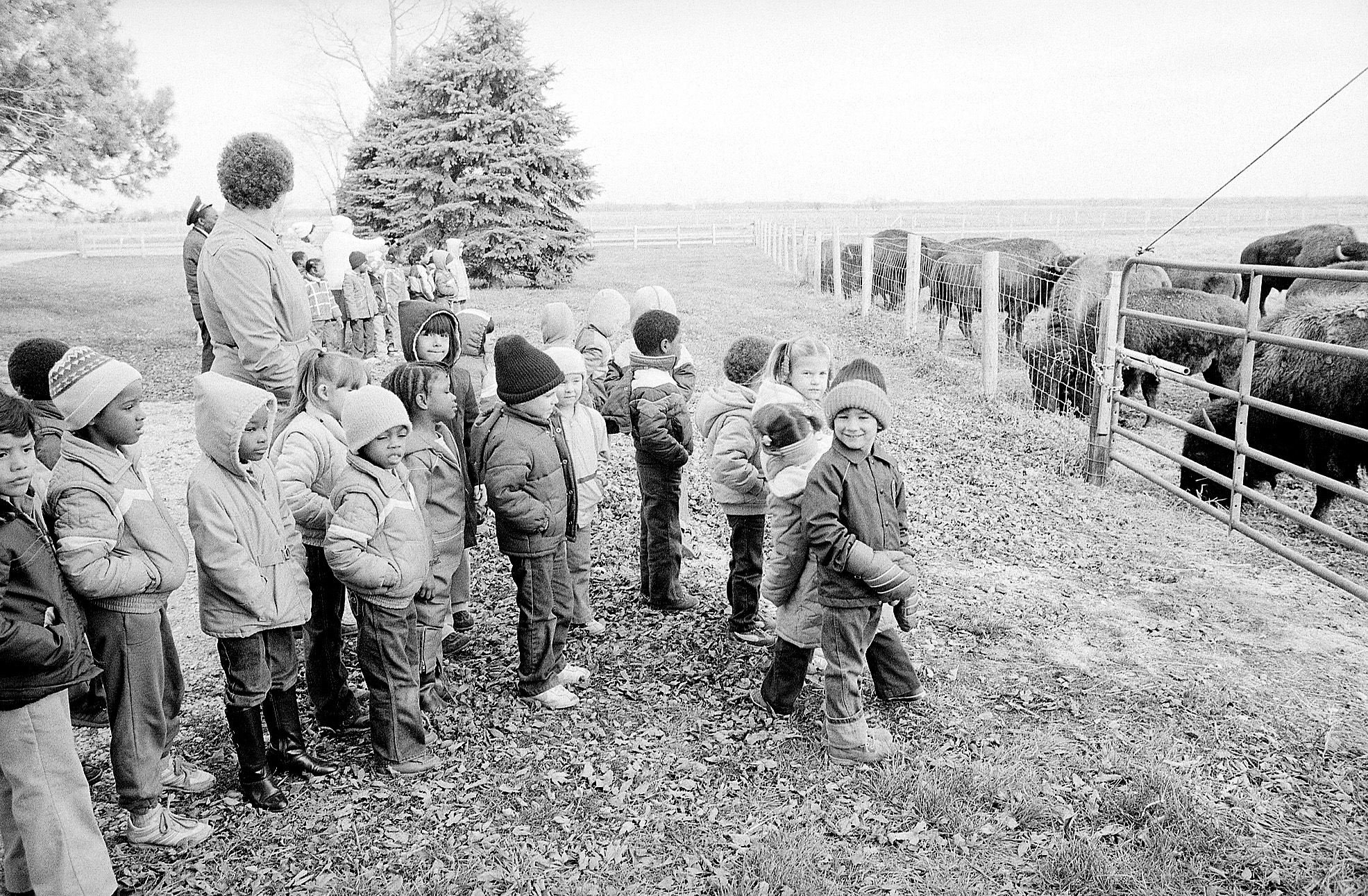 Fermilab remains committed to maintaining its famous herd. Here, Wilson Hall touches the sky in the distance, while mother and baby bison touch noses in Fermilab’s multi-acre greenery during mid-April 2021. 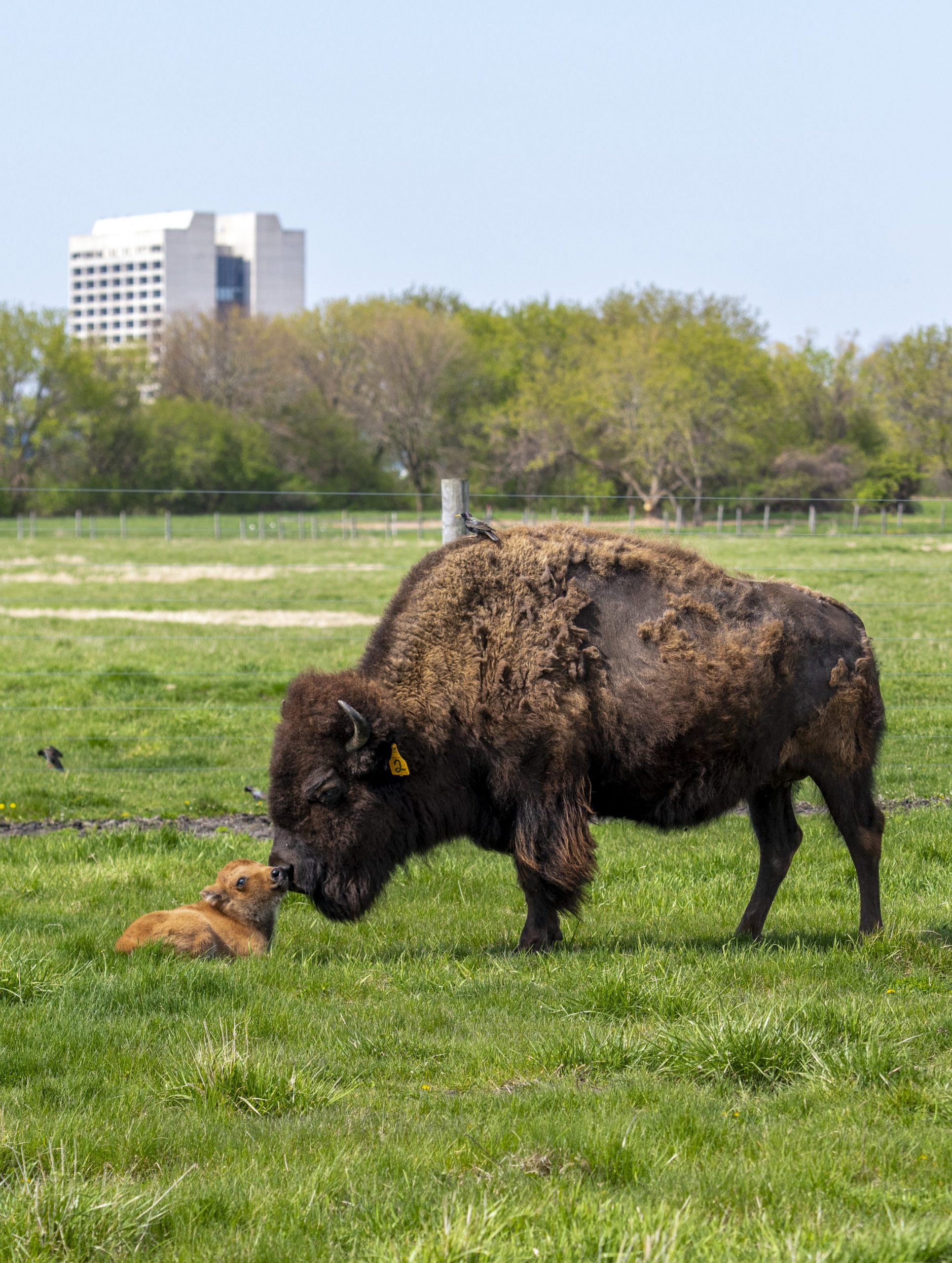