Deep below the surface in South Dakota, construction crews have been working tirelessly to carve out a network of caverns and tunnels that one day will house a huge neutrino experiment. Their efforts are paying off: With almost 400,000 tons of rock extracted from the earth, the excavation is now half complete.

Once finished, the Long-Baseline Neutrino Facility will be the site of the international Deep Underground Neutrino Experiment. DUNE will focus on studying neutrinos, elusive particles that may hold the answers to many of the universe’s mysteries, such as why our universe is made of matter and how black holes and neutron stars are born. More than 1,000 scientists and engineers from over 30 countries are a part of LBNF/DUNE.

LBNF will provide the space, infrastructure and particle beam for DUNE, hosted by the U.S. Department of Energy’s Fermi National Accelerator Laboratory. It includes underground caverns for a near detector at Fermilab, about 40 miles west of Chicago, and a far detector located 800 miles away at the Sanford Underground Research Facility in South Dakota. 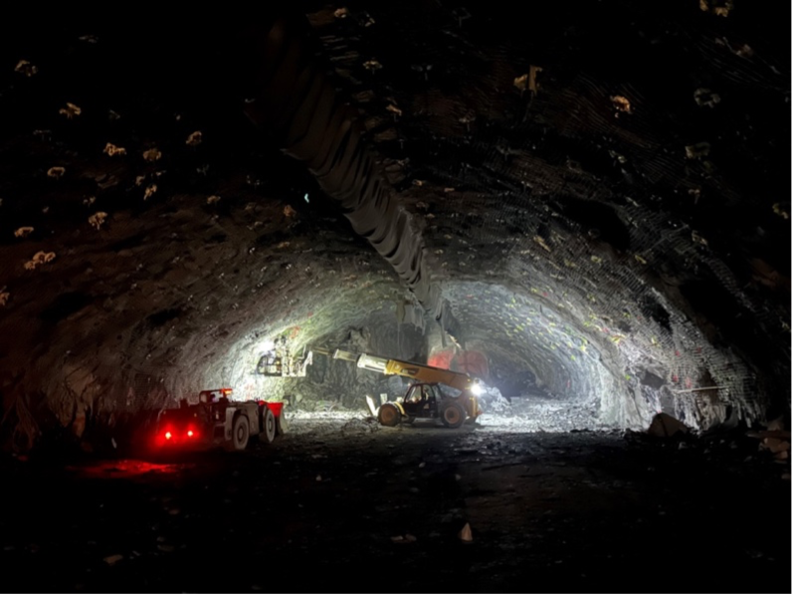 When complete later this year, this cavern will be around 500 feet long, 65 feet wide and 90 feet high. It will be one of three caverns that will provide space to house particle detector modules and other equipment for the Deep Underground Neutrino Experiment. Photo: David Smith, Fermilab

To create these caverns, a total of approximately 800,000 tons of rock will be excavated and moved to the surface. Once complete, the footprint of the underground area with the three caverns will cover about the size of eight soccer fields.

Thyssen Mining Inc., the company contracted to carry out the excavation, began the underground work at SURF in 2021. This January, construction crews reached a critical milestone: 50% completion.

Moving all the necessary equipment underground was no simple task. It involved taking the underground construction mining equipment apart, lowering the parts a mile below the ground through a narrow shaft, then reassembling the construction machinery underground. It was a process that “required a lot of time,” said Michael Gemelli, the LBNF Far-Site Conventional Facilities project manager.

One of the pieces of equipment brought underground was the raise bore machine, which was used to create a ventilation shaft for cooling and airflow to the underground caverns. To create this shaft, workers used the raise bore machine to drill a 13 3/4-inch pilot hole. Then, they attached a 12-foot-diameter reamer head to the drill stem and back-reamed the pilot hole to form a raise bore hole that is 1,200 feet in height.

Once the equipment was underground, construction crews began excavating the drifts, an interconnecting highway of tunnels that connect the three caverns. To form these underground tunnels, the miners used the drill-and-blast technique, which involves drilling a series of holes, then filling those holes with explosives to blast away the rock.

Construction crews now are in the process of excavating the caverns using the drill-and-blast method. An important milestone during this first half of the excavation was the completion of the caverns’ top headings: dome-shaped upper sections of each of the caverns.

When forming the cavern top headings, the contractor had to execute this work methodically, said Gemelli. It involves initially excavating a small pilot tunnel to assess the geology and ground water conditions, then enlarge the sides to create the full span of the caverns. “This type of intensive mining required a lot of different steps to support the ground during excavation,” Gemelli added.

Following the excavation, workers installed steel monorail beams in the caverns to accommodate the cranes that will later be used to erect scientific equipment. They also reinforced both the drifts and cavern top headings with ground support anchors, wire mesh and sprayed concrete. 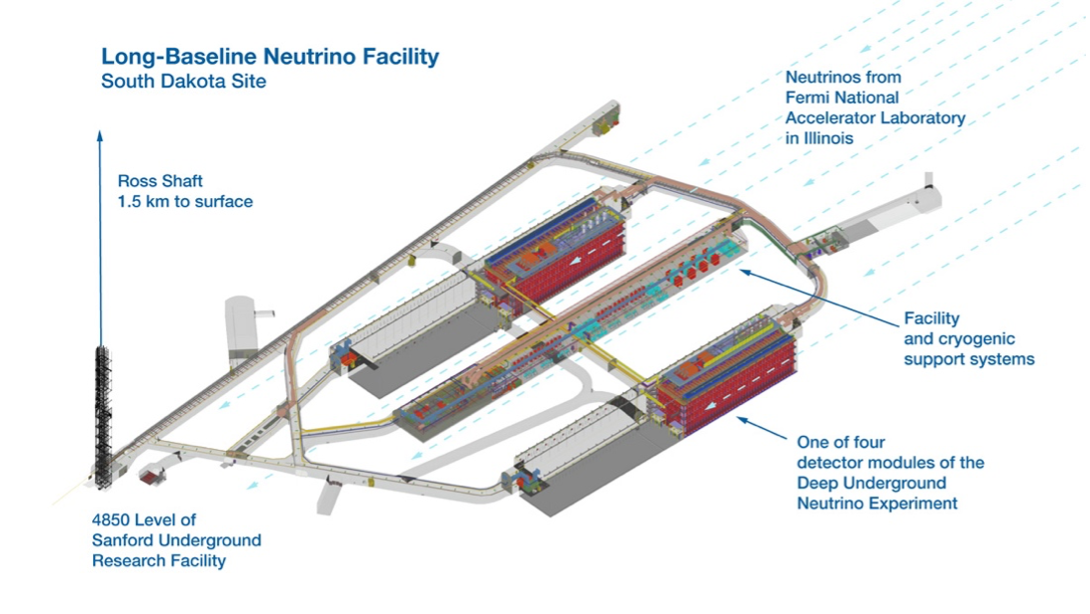 Almost 800,000 tons of rock need to be excavated to create the space for the South Dakota portion of the Deep Underground Neutrino Experiment. Half of the excavation is now complete. Graphic: Fermilab

Currently, 145 people from Thyssen work on site at SURF. The operations team, which works underground each day, consists of roughly 115 people. The rest includes engineers and administrative staff working on the surface.

The Thyssen team has successfully reached the halfway point of the excavation while maintaining an excellent standard of safety.

“Our safety record underground has been very good, and we would like to continue to the end of the project with nobody getting hurt,” said Moe. “Second to safety is to deliver a high-quality project, and everybody’s been happy with the quality of the work that we’ve done.”

The completion of the top headings sets the stage for the next phase of the excavation, which will involve drilling and blasting downward from those headings to carve out the rest of the caverns. “The last half of the project is all about excavating these three caverns,” Gemelli said. “This will be the peak period of rock excavation.”

Teams will also pour concrete floors in the base of the caverns and in all the interconnecting drifts. Once that’s complete, they will move the construction machinery out of the caverns — a process that will require first breaking down the equipment into smaller pieces, then sending the components up through the shaft to the surface.

This last half of the excavation will move much faster than the first half, according to Gemelli. The second phase of the excavation is now in full swing and is expected to be complete in 2024. “The hardest part of this project is now over with,” Gemelli said. “But we’ve still got a lot to do.”