The unhackable computers that could revolutionize the future

From CNN, Dec. 29, 2020: Researchers are trying to harness the counterintuitive behavior of quantum mechanics to build quantum computers, leading eventually to a quantum internet. The effort isn’t just an abstract goal of academics; it has been identified by the U.S. government as an important national initiative. In this opinion piece, Fermilab scientist Don Lincoln discusses the recent quantum teleportation milestone at Fermilab and the quantum internet.

From VICE, Dec. 17, 2020: Fermilab and partners have successfully teleported qubits across 22 kilometers of fiber in two testbeds. The breakthrough is a step towards a practical, high-fidelity quantum internet. Fermilab scientist and Quantum Science Program Head Panagiotis Spentzouris is quoted in this article. 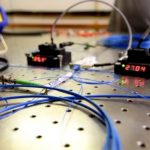 A joint team of researchers at Fermilab and partner institutions have achieved quantum teleportation, teleporting information over a distance of 44 kilometers. The remarkable achievement supports the premise that scientists and engineers can build a workable and high-fidelity quantum network using practical devices.