Of the CMS collaboration’s approximately 2,300 physicists, about 500 are U.S. scientists, from more than 45 U.S. universities and Fermilab, supported by the Department of Energy and the National Science Foundation. The U.S. is the largest single national group in the experiment, and U.S. scientists have built and delivered several key elements of the CMS detector to CERN.

Physicist Dennis Kovar, acting associate director for High Energy Physics at DOE’s Office of Science was on the scene in Geneva as the tracker descended into place. “It was remarkable to watch the team of scientists as the CMS detector comes to completion,” Kovar said. “The tracker represents an extraordinary technological feat. I congratulate the CMS collaboration on their achievement and look forward to celebrating their next milestone.”

“This is a major milestone,” said Joseph Incandela of the University of California at Santa Barbara, U.S. tracker project leader. “All of the myriad components from universities and laboratories around the world are now assembled in one place. The detector is finally taking shape in its home. For some of us, this road started ten years ago, and the final destination is very satisfying.”

Physicists from the U.S. built and tested 135 of the 205 square meters of the Silicon Strip Tracking Detector. With an area about the size of a singles tennis court, it is by far the largest semiconductor silicon detector ever constructed. Its sensors are patterned to provide a total of 10 million individual sensing strips, each read out by one of 80,000 custom-designed microelectronics chips. Forty thousand optical fibers then transport data into the CMS data acquisition system.

The silicon sensors are precision mounted onto 15,200 modules. These are in turn mounted onto a very-low-mass carbon fiber structure that maintains the position of the sensors to 100 microns, or less than the diameter of a human hair. “The silicon strip detector operates like a high speed photographic camera, capable of taking 40 million images a second,” said Fermilab physicist Slawek Tkaczyk.

Component fabrication started in clean-room facilities at Fermilab and the University of California at Santa Barbara in 2004. Final assembly of the silicon tracking detector began in December 2006 and reached completion in March 2007. Collaborators then partially commissioned the detector’s systems in a test phase, operating 20 percent of the full detector over several months and recording the tracks from five million cosmic rays. Physicists rapidly analyzed the results from these data, using the experiment’s Grid-based distributed computing system. This partial commissioning demonstrated that the detector fully meets the experiment’s requirements.

“Constructing a scientific instrument of this size and complexity, designed to operate at the LHC without intervention for more than ten years, is a major engineering and scientific achievement,” said CMS spokesman Tejinder Virdee. “More than five hundred scientists and engineers from fifty-one research institutions world-wide have contributed to the success of the project.”

Full commissioning will start soon in the underground collision hall to prepare for data taking in the spring or summer of 2008.

“We are now one major step closer to discovering new physics that promises to change our understanding of the universe,” said Joseph Dehmer, director of the Physics Division at NSF. “We are proud of the U.S. scientists’ significant contribution to this international state-of-the-art detector.” 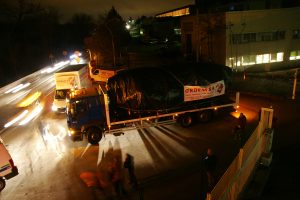 The CMS tracker at CERN traveled Wednesday, Dec. 12, from the Meyrin site to Point 5. It traveled at night to minimize traffic impact. The Tracker was lowered into the cavern Thursday, Dec. 13, and will be installed into CMS on Saturday, Dec. 15. Image courtesy Michael Hoch, Adventure Art. 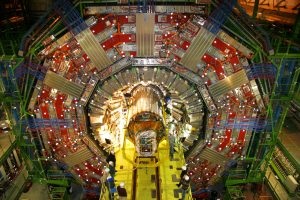 The CMS tracker team inserts the tracker into the detector core. The process takes 18 hours from the time the seal is removed until the tracker is secured in place. Image courtesy of Michael Hoch, Adventure Art. 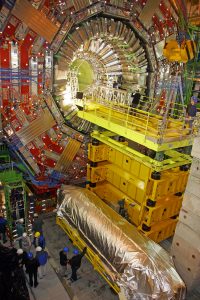 After lowering the sealed tracker into the experiment hall, the CMS team prepares to lift it into the detector. Image courtesy of Michael Hoch, Adventure Art. 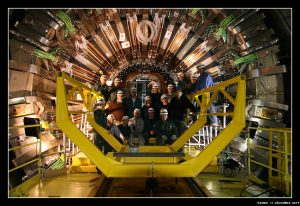 After inserting the tracker, the team gathers around the detector. Image courtesy of J.F. Fuchs. 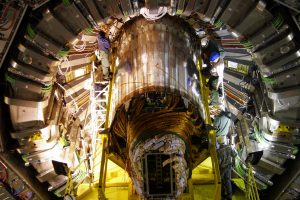 The CMS team removes the seal and slowly pushes the tracker into the detector core. Image courtesy of Michael Hoch, Adventure Art.

The United States contributions to the CMS experiment and the Large Hadron Collider are funded by the Department of Energy’s Office of Science and the National Science Foundation.

Fermi National Accelerator Laboratory is the host laboratory for the US CMS Collaboration. Fermilab is a Department of Energy National Laboratory operated under a contract with DOE by the Fermi Research Alliance.