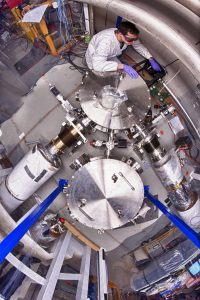 The Holometer is sensitive to high-frequency gravitational waves, allowing it to look for events such as cosmic strings. Photo: Reidar Hahn, Fermilab

Imagine an instrument that can measure motions a billion times smaller than an atom that last a millionth of a second. Fermilab’s Holometer is currently the only machine with the ability to take these very precise measurements of space and time, and recently collected data has improved the limits on theories about exotic objects from the early universe.

Our universe is as mysterious as it is vast. According to Albert Einstein’s theory of general relativity, anything that accelerates creates gravitational waves, which are disturbances in the fabric of space and time that travel at the speed of light and continue infinitely into space. Scientists are trying to measure these possible sources all the way to the beginning of the universe.

The Holometer experiment, based at the Department of Energy’s Fermilab, is sensitive to gravitational waves at frequencies in the range of a million cycles per second. Thus it addresses a spectrum not covered by experiments such as the Laser Interferometer Gravitational-Wave Observatory, which searches for lower-frequency waves to detect massive cosmic events such as colliding black holes and merging neutron stars.

“It’s a huge advance in sensitivity compared to what anyone had done before,” said Craig Hogan, director of the Center for Particle Astrophysics at Fermilab.

This unique sensitivity allows the Holometer to look for exotic sources that could not otherwise be found. These include tiny black holes and cosmic strings, both possible phenomena from the early universe that scientists expect to produce high-frequency gravitational waves. Tiny black holes could be less than a meter across and orbit each other a million times per second; cosmic strings are loops in space-time that vibrate at the speed of light.

The Holometer is composed of two Michelson interferometers that each split a laser beam down two 40-meter arms. The beams reflect off the mirrors at the ends of the arms and travel back to reunite. Passing gravitational waves alter the lengths of the beams’ paths, causing fluctuations in the laser light’s brightness, which physicists can detect.

The Holometer team spent five years building the apparatus and minimizing noise sources to prepare for experimentation. Now the Holometer is taking data continuously, and with an hour’s worth of data, physicists were able to confirm that there are no high-frequency gravitational waves at the magnitude where they were searching.

The absence of a signal provides valuable information about our universe. Although this result does not prove whether the exotic objects exist, it has eliminated the region of the universe where they could be present.

“It means that if there are primordial cosmic string loops or tiny black hole binaries, they have to be far away,” Hogan said. “It puts a limit on how much of that stuff can be out there.”

Detecting these high-frequency gravitational waves is a secondary goal of the Holometer. Its main purpose is to determine whether our universe acts like a 2-D hologram, where information is coded into two-dimensional bits at the Planck scale, a length around ten trillion trillion times smaller than an atom. That investigation is still in progress.

“For me, it’s gratifying to be able to contribute something new to science,” said researcher Bobby Lanza, who recently earned his Ph.D. conducting research on the Holometer. He is the lead author on an upcoming paper about the result. “It’s part of chipping away at the whole picture of the universe.”