Imagine the ratio of the size of the universe compared to a speck of dust. That’s about how big the speck of dust is compared to the Planck length, 10-33 centimeters. The Planck time is how long it takes light to travel that distance.

Quantum mechanics tells us that everything is constantly fluctuating on small scales, but Planck-scale jitters of space and time themselves are so small that they’ve never been measured in the laboratory. Better understanding movement at the Planck scale may help physicists answer a basic and important question: Why do things appear to happen at definite times and places?

This space-time property, sometimes called simply “locality,” is indeed pretty basic. Definite places and times are supposed to be what space-time is made of — the very fabric of reality.

It has long been thought that the Planck scale is too small to study in any experiment, but about 10 years ago we decided to try it anyway. It’s possible that Planck-scale quantum uncertainties of space-time add up over the time it takes light to cross an experiment, so an impossibly small effect becomes merely very hard — rather than impossible — to detect. So, we built an apparatus called the Fermilab Holometer to look for very small fluctuations in widely separated locations. 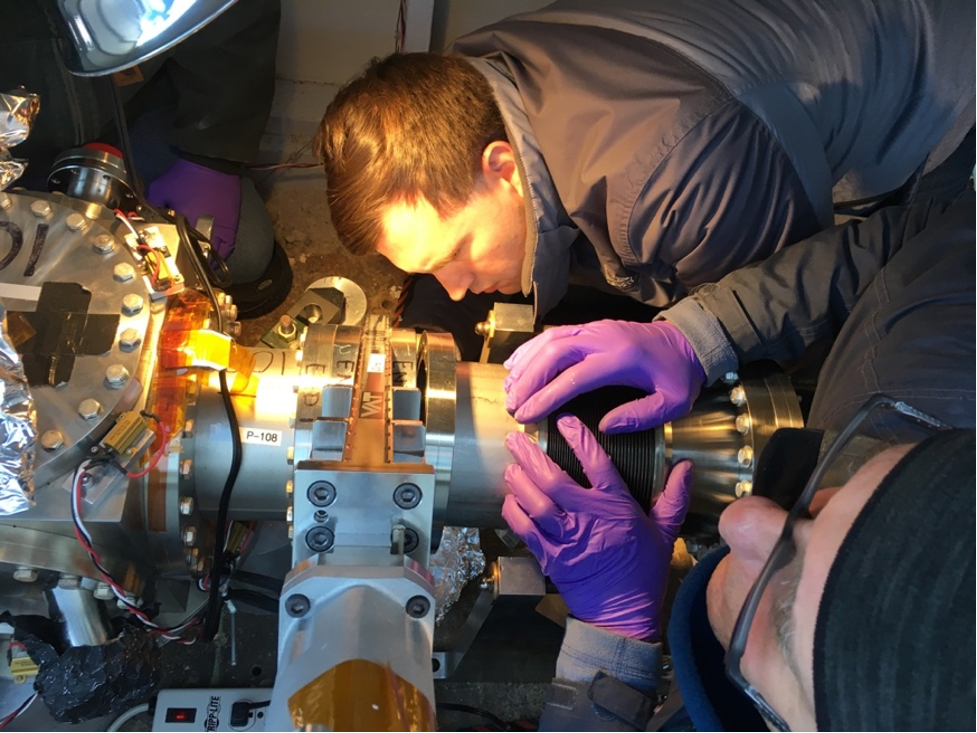 On Dec. 20, 2016, University of Chicago scientists Jonathan Richardson and Stephan Meyer work on the final assembly of the newly reconfigured Holometer vacuum system, which is inside an rough enclosure made of plywood, on a platform made of a steel slab recycled from Fermilab’s boneyard. The steel cube at the left holds the end mirror of one of the Holometer interferometers. Photo: Craig Hogan, Fermilab

A quantum system is anything made of matter and energy, and nothing in it happens at a definite place and time until it is measured. Space-time seems to be just the opposite: Everything happens locally at a definite place, but its properties can be measured only nonlocally, that is, by comparing what happens in different places.

Somehow, these two different world-systems — quantum matter and space-time — share and interact in the same real physical world. Local absolute space directly affects matter, as anyone can see by spinning a top or experience by getting dizzy on a merry-go-round. Because matter is the source of gravity, it obviously affects space and time. Gravitational waves, which are made of pure space-time, carry energy and information, even through “empty” space, and matter can turn into pure space-time, in the form of black holes. But nobody understands exactly how quantum stuff relates to space and time.

The reason it’s easy to forget about quantum space-time in everyday life, and even in most Fermilab experiments, is that it doesn’t affect anything we actually measure. Although there must be some quantum uncertainty to space-time itself, it becomes fatal to standard theory only below the length where single quantum particles form black holes. This is the tiny scale we call the Planck length.

The Holometer’s success in measuring nothing

On a modest, 40-meter scale, the Holometer resembles giant detectors, such as the Laser Interferometer Gravitational-Wave Observatory in Hanford, Washington, and Livingston, Louisiana, that are used to detect gravitational waves from distant objects. Like LIGO, it uses mirrors and light — laser interferometers — to measure the shaking of space and time. In the Holometer, the laser light and mirrors, taken together as a system, become a nonlocal quantum object 40 meters long in one direction and 40 meters in another. They create an output signal that depends on quantum differences in the mirror positions. We can measure fluctuations from random changes of relative position of only one Planck length every Planck time if they are coherently correlated on the scale of the apparatus.

We published the results of our first experiment several years ago. In one sense the experiment was a big success, since we succeeded in measuring nothing with an unprecedented precision: With some kinds of Planck-scale jitters, we would have seen a big effect. But we found no such shaking. It was quiet.

However, that experiment did not rule out all kinds of fluctuating motion in space-time. For example, because the arms of its interferometers were straight, the laser light would not be affected if the apparatus shook with a purely rotational motion: The mirrors would move sideways relative to the beam instead of along it.

Searching for Planck-scale twists in space-time

In general relativity, rotating matter drags space-time along with it. In the presence of a rotating mass, the local nonrotating frame, as measured by a gyroscope, rotates relative to the distant universe, as measured by distant stars. It could well be that quantum space-time has a Planck-scale uncertainty of the local frame, which would lead to random rotational fluctuations or twists that we would not have detected in our first experiment, and much too small to detect in any normal gyroscope.

So, we did a new experiment. We rebuilt the apparatus in a new shape. We added extra mirrors to steer some of the laser light in different direction, so the signal would respond to coherent rotational jitters or twists.

The new instrument is an incredibly sensitive gyroscope for very short durations, able to detect very small rotational twists over the fraction of a microsecond it takes light to cross it. We can detect shaking that changes direction randomly a million times a second, but that moves the opposite sides of the apparatus by only a billionth of a billionth of a meter — a speed much slower than continental drift. In our apparatus, that corresponds to randomly fluctuating twists of about one Planck length every Planck time.

We recently completed our final experiment with this reconfigured Holometer. Our final result is again no jitters, which can be interpreted as no Planck-scale twists, of a certain kind, in the fabric of space-time. It seems space-time at the Planck scale is very quiet indeed.

The reason to keep looking for these effects is that we may never understand how quantum space-time works without some measurement to guide theory. The Holometer program is exploratory. Our experiment started with only rough theories to guide its design, and we still do not have a unique way to interpret our null results, since there is no rigorous theory of what we are looking for. Are the jitters just a bit smaller than we thought they might be, or do they have a symmetry that creates a pattern in space that we haven’t measured? New technology will enable future experiments better than ours and possibly give us some clues to how space and time emerge from a deeper quantum system.

We recently published a paper on our findings in the arXiv.

Craig Hogan is a Fermilab scientist and a professor of astronomy and astrophysics at the University of Chicago.