In late 2019, Betelgeuse, the star that forms the left shoulder of the constellation Orion, began to noticeably dim, prompting speculation of an imminent supernova. If it exploded, this cosmic neighbor a mere 700 light-years from Earth would be visible in the daytime for weeks. Yet 99% of the energy of the explosion would be carried not by light, but by neutrinos, ghost-like particles that rarely interact with other matter.

If Betelgeuse does go supernova soon, detecting the emitted neutrinos would “dramatically enhance our understanding of what’s going on deep inside the core of a supernova,” said Fermilab theorist Sam McDermott. And it would present a unique opportunity to investigate the properties of neutrinos themselves. The Deep Underground Neutrino Experiment, hosted by Fermilab and planned to begin operation in the late 2020s, is being developed with these goals in mind. 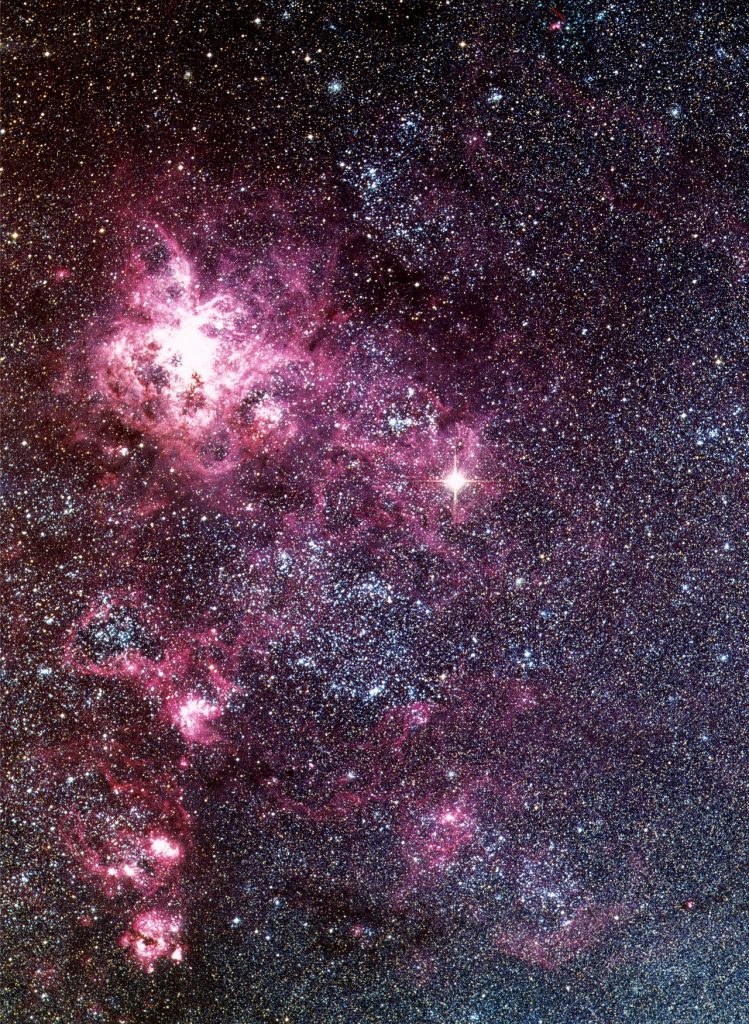 Only once before have scientists detected the neutrinos emitted by a supernova: During SN 1987A (bright star at center), detectors spotted only about two dozen neutrino interactions. The exploding star was in the Large Magellanic Cloud, 240 times more distant from Earth than Betelguese. Photo: ESO

DUNE’s far detector — an enormous tank of liquid argon at the Sanford Underground Research Facility in South Dakota — will pick up signals left by neutrinos beamed from Fermilab as well as those arriving from space. Since a supernova emits neutrinos evenly in all directions, the number of neutrinos that DUNE could detect falls off as the square of the distance between the supernova and Earth. That is, the number of neutrinos that could be spotted 10,000 light-years away from a supernova is 100 times smaller than the number that could be detected from an equally powerful supernova 1,000 light-years away.

For this reason, if a supernova occurs in the middle of our galaxy, tens of thousands of light-years away, DUNE will likely detect a few thousand neutrinos. Because of Betelgeuse’s relative proximity, however, scientists expect DUNE to detect around a million neutrinos if the red supergiant explodes in the coming decades, offering a bonanza of data.

Although the light from the Betelgeuse supernova would linger for weeks, the burst of neutrinos would last only minutes.

“Imagine you’re in the forest, and there’s a meadow and there’s fireflies, and it’s the time of night where thousands of them come out,” said Georgia Karagiorgi, a physicist at Columbia University who leads the data selection team at DUNE. “If we could see neutrino interactions with our bare eyes, that’s kind of what it would look like in the DUNE detector.”

The detector will not directly photograph incoming neutrinos. Rather, it will track the paths of charged particles generated when the neutrinos interact with argon atoms. In most experiments, neutrino interactions will be rare enough to avoid confusion about which neutrino caused which interaction and at what time. But during the Betelgeuse supernova, so many neutrinos arriving so quickly could present a challenge in the data analysis — similar to tracking a single firefly in a meadow teeming with the insects.

“To remove ambiguities, we rely on light information that we get promptly as soon as the interaction takes place,” Karagiorgi said. Combining the light signature and the charge signature would allow researchers to distinguish when and where each neutrino interaction occurs.

From there, the researchers would reconstruct how the types, or flavors, and energies of incoming neutrinos varied with time. The resulting pattern could then be compared against theoretical models of the dynamics of supernovae. And it could shed light on the still-unknown masses of neutrinos or reveal new ways that neutrinos interact with each other.

Of course, astronomers who hope for Betelgeuse to go supernova are also interested in the light generated by the star explosion. When complete, DUNE will join the Supernova Early Warning System, or SNEWS, a network of neutrino detectors around the world designed to automatically send an alert when a supernova is in progress in our galaxy. Since neutrinos pass through a supernova unimpeded, while particles of light are continually absorbed and reemitted until reaching the surface, the burst of neutrinos arrives at Earth hours before the light does — hence the early warning.

SNEWS has never sent out an alert. Although hundreds of supernovae are observed each year, the most recent one close enough to Earth for its neutrinos to be detected occurred in 1987, more than a decade before SNEWS came online. Based on other observations, astronomers expect a supernova to occur in our galaxy several times per century on average.

“If we run DUNE a few decades, we have pretty good odds of seeing one, and we could extract a lot of science out of it,” said Alec Habig, a physicist at the University of Minnesota, Duluth, who coordinates SNEWS and is involved with data acquisition on DUNE. “So let’s make sure we can do it.”

Given the enormous radius of the red supergiant, Habig said, DUNE would detect neutrinos from Betelgeuse up to 12 hours before light from the explosion reaches Earth, giving astronomers plenty of time to point their telescopes at Orion’s shoulder.

Continuing observations of Betelgeuse suggest that its recent dimming was a sign of its natural variability, not an impending supernova. Current estimates give the star up to 100,000 years to live.

But if scientists get lucky, “an explosion at Betelgeuse would be an amazing opportunity,” McDermott said, “and DUNE would be an incredible machine for the job.”

Fermilab astrophysics research and the Deep Underground Neutrino Experiment are supported by the Department of Energy Office of Science.