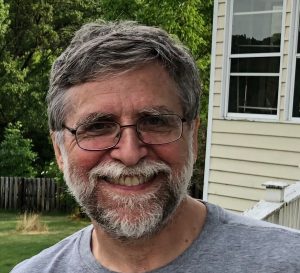 Fermilab’s Robert Bernstein had been conducting neutrino research for 25 years when he began searching for a new project.

“One of my friends came up to me and said, ‘You should be Mu2e spokesperson.’ And I said, ‘What’s Mu2e?’ I went off and did some homework and I said, ‘OK, it’s terrifically interesting, really hard, and I don’t know anything about it. Sure. Sign me up!” he said.

Although the muon was discovered in 1936, physicists still seek to understand why the particle exists, thus the need for the Mu2e experiment (pronounced “mew 2 E,” which stands for muon-to-electron conversion). It’s part of a larger question: Why do multiple generations of subatomic particles exist? The quark family is made of three generations of particles — up and down, strange and charm, bottom and top — each heavier than the next. Similarly, the lepton family has three generations — electrons, muons and taus — and again, the members have different masses.

“Why is that? Why are there these generations of particles. That’s a fundamental question,” Bernstein said.

“Bob and I were co-spokespersons at the beginning of Mu2e, and it’s great to work with him again,” Miller said. “He brings a deep knowledge of the experiment and a proven record of leadership.”

“He has a long and distinguished career in muon physics and precision experiments,” Bernstein said of Miller. “He’s been doing this even longer than I have.”

The Mu2e collaboration consists of nearly 250 scientists at 40 institutions. The MBA that Bernstein earned from the University of Chicago in 2006 has helped him grapple with the organizational challenges involved in working with such a large group.

“I majored in organizational behavior. In terms of thinking about how to get people to work together on a task or a big project or a big problem, I use the ideas I learned there every day,” he said.

Bernstein noted that the experiment is changing from construction to installation.

“The building, along with most components for the infrastructure, experiment and beam have been built, and over the next couple of years, we’ll turn Mu2e into a running experiment,” he said. “It’s an exciting time, and a great one for young people who will put the parts together. When someone is analyzing data, they’ll know they we’re the ones who installed the piece that gave them that data, and they’ll know all its quirks. That’s a lot of fun and incredibly satisfying.”

The collaboration has needed to invent technology to get to this point. No one, for example, has ever built anything like Mu2e’s solenoid system, which serves as the heart of the experiment. The tracker, the instrument that detects the electron, boasts novel technology that includes straw-like tubes whose walls are about half as thin as a typical human hair.

Mu2e meshes nicely with Fermilab’s NOvA neutrino experiment, which Bernstein also is involved in. NOvA’s goals include observing the oscillation of muon neutrinos into electron neutrinos. Mu2e similarly seeks evidence for the conversion of muons to electrons. Such a discovery could put physicists on the trail of new particles or new forces of nature. To get there, the collaboration continues to solve new problems as they arise.

“For me on a daily basis the most fun part of the experiment is working on really hard problems with really smart people,” Bernstein said. “That’s motivating for me.”

Muon research at Fermilab is supported by the Department of Energy Office of Science.