On Oct. 21, the PIP-II Injector Test Facility at the U.S. Department of Energy’s Fermilab accelerated proton beam through its new superconducting section for the first time at nearly perfect transmission.

The facility, also known as PIP2IT, is a test bed for Fermilab’s upcoming PIP-II superconducting particle accelerator, whose proton beams will reach levels of power not seen before at the lab.

The PIP-II accelerator — the first major U.S. accelerator project with multinational contributions — will enable the production of intense neutrino beams to the international, Fermilab-hosted Deep Underground Neutrino Experiment. The versatile 800-million-electronvolt, 215-meter-long machine will also be capable of sending high-power proton beams of various patterns to other Fermilab experiments, bolstering the long-term future of the lab. 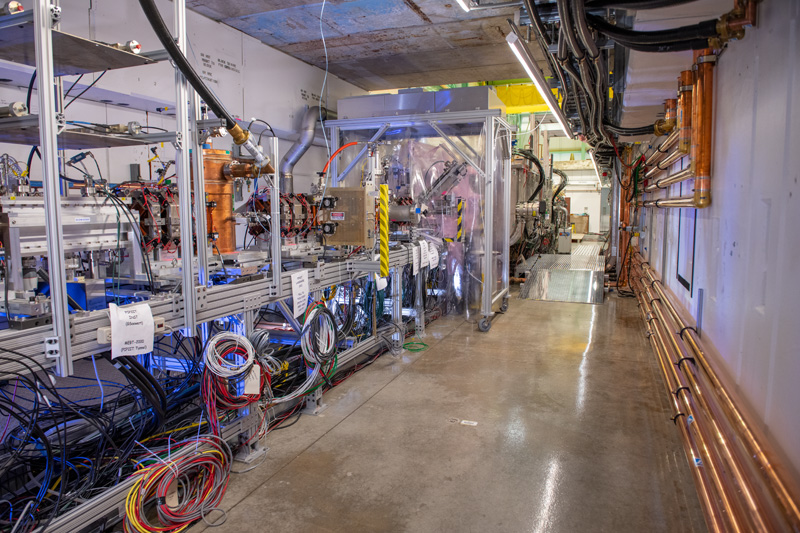 PIP-II’s power and versatility depend on its front section, that initial stretch through which protons are released from the gate and cranked up to about 20% the speed of light. As the locale of many of the new techniques that will make PIP-II the heart of the laboratory’s accelerator complex, the front end has a great deal riding on it.

That’s why the PIP-II collaboration established PIP2IT as a test bed for the front section of PIP-II. At this proving ground, scientists, engineers and technicians work to demonstrate concepts and technologies that will be deployed at PIP-II and reduce or remove the related technical risks.

“PIP2IT offers fantastic opportunities to further our knowledge and prepare us for surprises that surely lie ahead. It allows the team to test PIP-II critical technologies early, significantly reducing technical project risks, and gain commissioning experience that will be used later to commission PIP-II,” said Eduard Pozdeyev, PIP-II Project scientist and commissioning lead.

PIP2IT consists of two major sections. The first is based on room-temperature technology and includes a radio-frequency quadrupole, a device that focuses and accelerates the beam, designed and built by DOE’s Lawrence Berkeley National Laboratory. 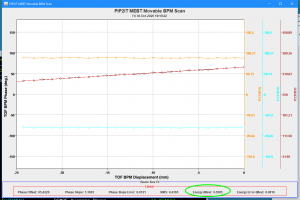 The PIP2IT beam phase is measured by a movable beam position monitor at the end of the PIP2IT linear accelerator at several positions along the beamline. The slope of the curve yields the beam velocity and hence the beam energy. Image: PIP-II

The second section is based on superconducting radio-frequency technology, or SRF, and consists of two cryomodules which are large housing vessels for the cold, superconducting structures that accelerate the beam, known as cavities. DOE’s Argonne National Laboratory designed and built the first cryomodule, known as HWR. The second cryomodule, a type known as SSR1, was designed and built by Fermilab and houses an accelerator cavity provided by India’s Bhabha Atomic Research Center. (The complete PIP-II accelerator will have 23 cryomodules of five different types.)

The acceleration of particles through this superconducting section marks the start of SRF proton beam operation at Fermilab and sets the stage for the first large scale SRF accelerator of the Fermilab complex.

“First accelerated beam through PIP-II cryomodules at PIP2IT is a major achievement and marks the start of critical tests for one of the most ambitious aspects of the PIP-II project, the front end of the accelerator,” said Fermilab PIP-II Project Director Lia Merminga. “These cryomodules worked exactly as intended the very first time we sent beam through them. We rarely see a nearly perfect performance like this on the first try. It’s a solid accomplishment, and a credit to our team’s technical excellence and rigorous quality control.”

Not only is PIP2IT a high-performing accelerator, it also uses next-generation technology to create beautiful beams.

For example, Fermilab’s PIP-II team plans to employ “strong-back” technology on four of PIP-II’s five cryomodule types. The strong-back technology connects each accelerator cavity to a common frame rather than to its neighbor, as is typical. This structure keeps the cavities cold yet anchored to a room-temperature frame for easier alignment, less vibration and easy assembly.

PIP2IT’s SSR1 cryomodule is built on a strong back, and ongoing tests are validating the concept. This will be only the second time the technology is being applied on a superconducting accelerator, so rigorous validation is essential. 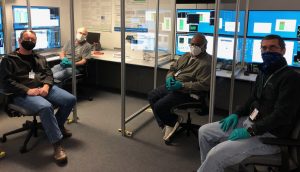 As the heart of the Fermilab accelerator chain, the PIP-II accelerator is designed to route beams of different patterns of particles to different experiments. For example, it could send every third packet of protons to experiment A while sending every first and fourth packet to experiment B. To deliver the required beam patterns to multiple users, the PIP-II front end includes a system called a chopper, which can remove or let pass through packets of protons according to a preprogrammed pattern. Incredibly, this fast chopper can remove one packet without affecting its neighbor — only six nanoseconds apart. That minuscule time interval is about 10 million times shorter than the flicker of time between movie frames.

The PIP-II team plans to implement machine learning to facilitate this flexible beam delivery. With the adaptation of computer code used at another accelerator — SLAC National Accelerator Laboratory’s LCLS-II X-ray laser — the PIP-II’s complicated sort-and-ship process will take about a 10th of the time it would take to set up the accelerator and route beam manually. The PIP2IT algorithm tests are a first step in minimizing human intervention in PIP-II operation.

PIP2IT will also be used to validate a battery of lower-risk systems, including those that power the accelerator, protect the machine and diagnose the beam. Many of these components are contributions from international partners, such as India, who also lend their valuable expertise to the accelerator project.

“It was wonderful to learn that PIP2IT has reached 7.5 million electronvolts by accelerating beam through the first SSR1 cavity, which is powered by an amplifier developed by Bhabha Atomic Research Center of the Indian Department of Atomic Energy,” said Srinivas Krishnagopal, technical coordinator of the Indian Institutions and Fermilab Collaboration at the Bhabha Atomic Research Center. BARC is contributing nine amplifiers to the SSR1 cryomodule. “We look forward to the time when all of our amplifiers are installed and powered up and beam is accelerated through all the SSR1 cavities — including the one that was made in India. The smooth commissioning is testimony to the strength and depth of the Indian Institutions and Fermilab Collaboration.”

The Indian Institutions and Fermilab Collaboration is a partnership focused on high-power superconducting proton accelerator technologies.

“This first accelerated beam is a testament to the seamless integration of partner deliverables and the power of international partnership and collaboration,” Merminga said.

The PIP-II accelerator beam operation is planned to start in the late 2020s.

Fermilab is supported by the Office of Science of the U.S. Department of Energy. The Office of Science is the single largest supporter of basic research in the physical sciences in the United States and is working to address some of the most pressing challenges of our time. For more information, visit science.energy.gov.
Tagged: accelerator technology, PIP-II, PIP-II Injector Test, PIP2IT