Before researchers can smash together beams of particles to study high-energy particle interactions, they need to create those beams in particle accelerators. And the tighter the particles are packed in the beams, the better scientists’ chances of spotting rare physics phenomena.

Making a particle beam denser or brighter is akin to sticking an inflated balloon in the freezer. Just as reducing the random motion of the gas molecules inside the balloon causes the balloon to shrink, reducing the random motion of the particles in a beam makes the beam denser. But physicists do not have freezers for particles moving near the speed of light — so they devise other clever ways to cool down the beam.

An experiment underway at Fermilab’s Integrable Optics Test Accelerator seeks to be the first to demonstrate optical stochastic cooling, a new beam cooling technology that has the potential to dramatically speed up the cooling process. If successful, the technique would enable future experiments to generate brighter beams of charged particles and study previously inaccessible physics. 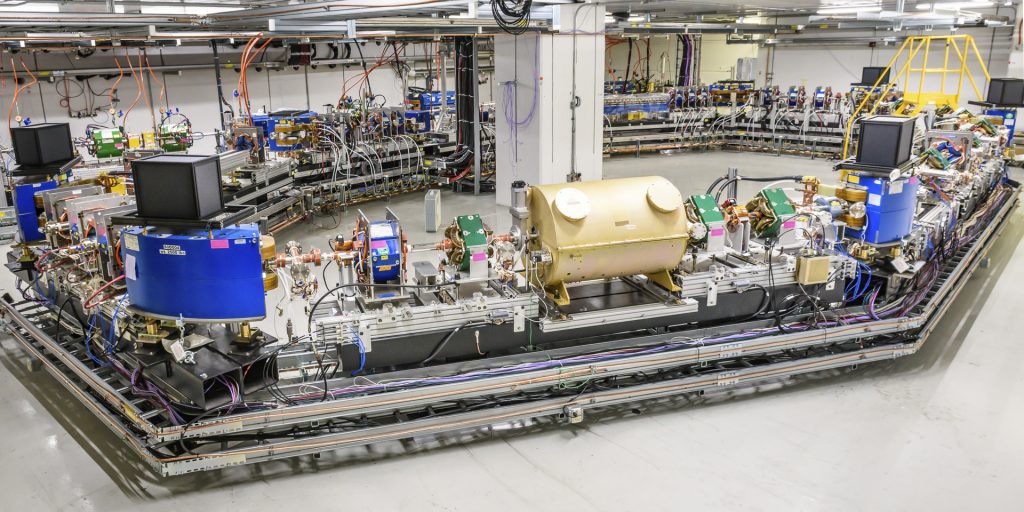 “There is this range of energies — about 10 to 1,000 GeV —  where there currently exists no technology for cooling protons, and that’s where optical stochastic cooling could be applied at the moment,” said Fermilab scientist Alexander Valishev, the leader of the team that designed and constructed IOTA. “But if we develop it, then I’m sure there will be other applications.”

In January, IOTA’s OSC experiment started taking data. IOTA is supported by the U.S. Department of Energy Office of Science.

OSC operates on the same principle as conventional stochastic cooling, a technology developed by Simon van der Meer and harnessed by Carlo Rubbia for the 1983 discovery of the W and Z bosons. Van der Meer and Rubbia won the 1984 Nobel Prize in physics for their work, which has since found use in many particle accelerators.

Stochastic cooling provides a way to measure how the particles in a beam move away from the desired trajectory and apply corrections to nudge them closer together, thus making the beam denser. The technique hinges on the interplay between charged particles and the electromagnetic radiation they emit.

As charged particles such as electrons or protons move in a curved path, they radiate energy in the form of light, which a pickup in the accelerator detects. Each light signal contains information about the average position and velocity of a “bunch” of millions or billions of particles.

Then an electromagnet device called a kicker applies this same signal back onto the bunch to correct any stray motion, like a soccer player kicking a ball to keep it in bounds. Each kick brings the average particle position and velocity closer to the desired value, but individual particles can still drift away. To correct the motion of individual particles and create a dense beam, the process must be repeated many thousands of times as the beam circulates in the accelerator. 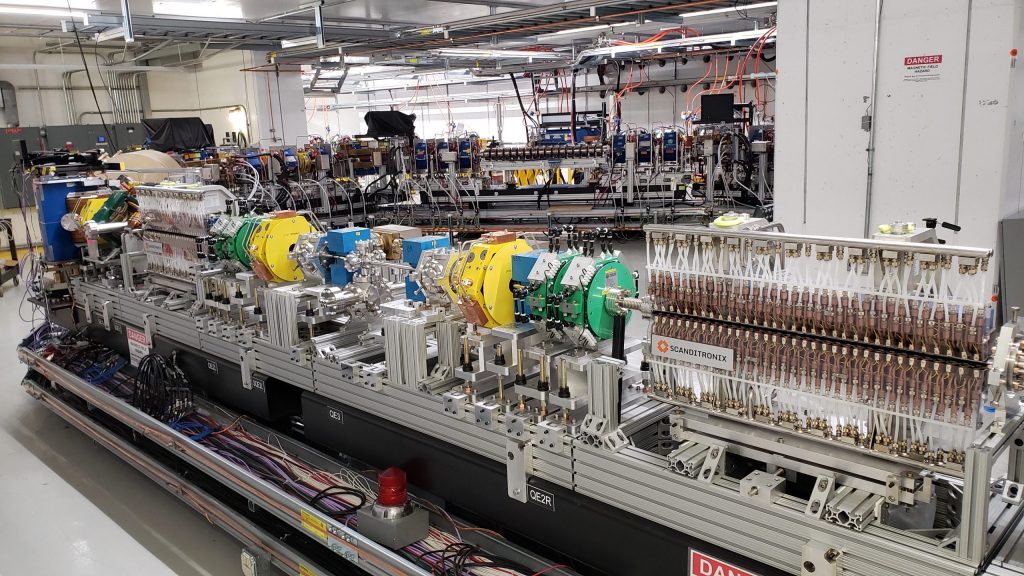 The two components with Scanditronix logos pictured here are the heart of IOTA’s optical stochastic cooling experiment. The pickup (left) measures the spread of the particle beam, and then the kicker (right) corrects the stray motion of the particles. Photo: Jonathan Jarvis, Fermilab

Traditional stochastic cooling uses electromagnetic signals in the microwave range, with centimeter-long wavelengths. OSC uses visible and infrared light, with wavelengths around a micron — a millionth of a meter.

“The scale is set by the wavelength,” Valishev said. “The shorter wavelengths mean we can read the beam information with higher resolution and better pinpoint corrections.”

The higher resolution allows OSC to provide more precise kicks to smaller groups of particles. Smaller groups of particles require fewer kicks in order to cool, just as a tiny balloon cools faster than a large one when put in the freezer. Each particle gets kicked once per lap around the accelerator. Since fewer kicks are required, the entire beam cools after fewer laps.

In principle, OSC could speed up beam cooling by a factor of 10,000 compared to conventional stochastic cooling. The first demonstration experiment at IOTA, which is using a medium-energy electron beam, has a more modest goal. As the beam circulates in the accelerator and radiates light, it loses energy, cooling on its own in about 1 second; IOTA seeks a tenfold decrease in that cooling time.

Proposals for OSC piqued the interest of the accelerator community as early as the 1990s, but so far a successful implementation has eluded researchers. Harnessing shorter wavelengths of light raises a host of technical challenges.

“The relative positions of all the relevant elements need to be controlled at the level of a quarter of a wavelength or better,” Valishev said. “In addition to that, you have to read the wave packet from the beam, and then you have to transport it, amplify it, and then apply it back onto the same beam. Again, everything must be done with this extreme precision.”

IOTA proved the perfect accelerator for the job. The centerpiece of the Fermilab Accelerator Science and Technology facility, IOTA has a flexible design that allows researchers to tailor the components in the beamline as they push the frontiers of accelerator science.

IOTA’s OSC experiment is beginning with electrons because these lightweight particles can easily and cheaply be accelerated to the speeds at which they radiate visible and infrared light. In the future, scientists hope to apply the technique to protons. Due to their larger mass, protons must reach higher energies to radiate the desired light, making them more difficult to handle.

At first, IOTA will study passive cooling, in which the light emitted by the electron beam will not be amplified before being shined back on the beam. After that simplified approach succeeds, the team will add optical amplifiers to strengthen the light that provides the corrective kicks.

In addition to providing a new cooling technology for high-energy particle colliders, OSC could enhance the study of fundamental electrodynamics and interactions between electrons and photons.

“Optical stochastic cooling is a blend of various areas of modern experimental physics, from accelerators and beams to light optics, all merged in one package,” Valishev said. “That makes it very challenging and also very stimulating to work on.”