No aspect of Fermilab, past or present — the accomplishments of the Tevatron, the popular Arts and Lecture Series, the education efforts, the world-leading neutrino program — would be what it is today without the contributions of women.

In the early days of the lab, most of the roles occupied by women were administrative support positions, as was the case in many workplaces of the late 1960s. While opportunities for women greatly expanded at the lab over its more-than-50-year history, the importance of administrative assistants hasn’t diminished. Then, as now, administrative positions were critical to to the operation of the lab, and they continue to be frequently held by women.

One of the first women to play an important role in shaping Fermilab was lab artist Angela Gonzales. It was so important to Robert Wilson, Fermilab’s first director, for the lab to have an environment that was aesthetically inspiring that Gonzales was the 11th person he hired. She developed the lab’s iconic logo and distinctive color scheme, and she designed imaginative covers for the lab’s publications. 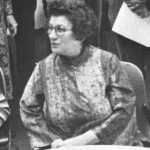 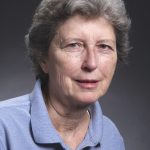 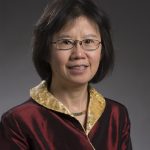 Young-Kee Kim
Janice Roberts also shaped arts and culture at the lab. With the encouragement of Robert Wilson and his wife Jane, Roberts, the wife of a physicist, started the Arts and Lecture Series and Guest Office and played a key role in the establishment of NALWO, the lab’s first women’s organization.

As time went on, more opportunities opened to women at the lab, especially in technical and leadership roles. One of the most notable women in the lab’s early history was accelerator physicist Helen Edwards, who was hired in 1970. She oversaw the design, construction, commissioning and operation of the Tevatron. The Tevatron, which was the world’s most powerful accelerator for many years, allowed the lab’s experiments CDF and DZero to discover the top quark in 1995. She won a MacArthur Fellowship in 1988 and, along with several of her colleagues, the National Medal of Technology in 1989 for her work on the Tevatron.


Fermilab archivist and historian Valerie Higgins presented a virtual talk on the history of women at Fermilab on Feb. 22.

In the subsequent decades, too many women to name have played key roles at the lab. Young-Kee Kim was the first woman to serve as the lab’s deputy director, a position she held from 2006 to 2013. Other women have been and continue to be leaders in experimental physics, theoretical physics, accelerator physics, computing, education, engineering, workforce development, administration, quantum science and many other areas at the lab.

The people mentioned here are just a small fraction of the women who have made the lab what it is today; any of these women, and hundreds of other women who have served at the lab, could have an entire article devoted just to their contributions.

On International Women’s Day, we honor the contributions of all Fermilab women to science.

Valerie Higgins is the Fermilab archivist and historian.