Editor’s note: This is a modified version of an article previously posted by the CERN Courier.

The TOTEM collaboration at the LHC, in collaboration with the DØ collaboration at the Tevatron collider at Fermilab, have announced the discovery of the odderon – an elusive state of three fundamental particles called gluons that was predicted almost 50 years ago. The result was presented on Friday 5 March during a meeting at CERN, and follows the joint publication in December 2020 of a CERN/Fermilab preprint by TOTEM and DØ reporting the observation.

“This result probes the deepest features of the theory of quantum chromodynamics, notably that gluons interact between themselves and that an odd number of gluons are able to be “colourless”, thus shielding the strong interaction,” says TOTEM spokesperson Simone Giani of CERN. “A notable feature of this work is that the results are produced by combining the LHC and Tevatron data at different energies.”

States comprising two, three or more gluons are usually called “glueballs”, and are peculiar objects made only of the carriers of the strong force. The advent of quantum chromodynamics (QCD) led theorists to predict the existence of the odderon in 1973. Proving its existence has been a major experimental challenge, however, requiring detailed measurements of protons as they glance off one another in high-energy collisions. 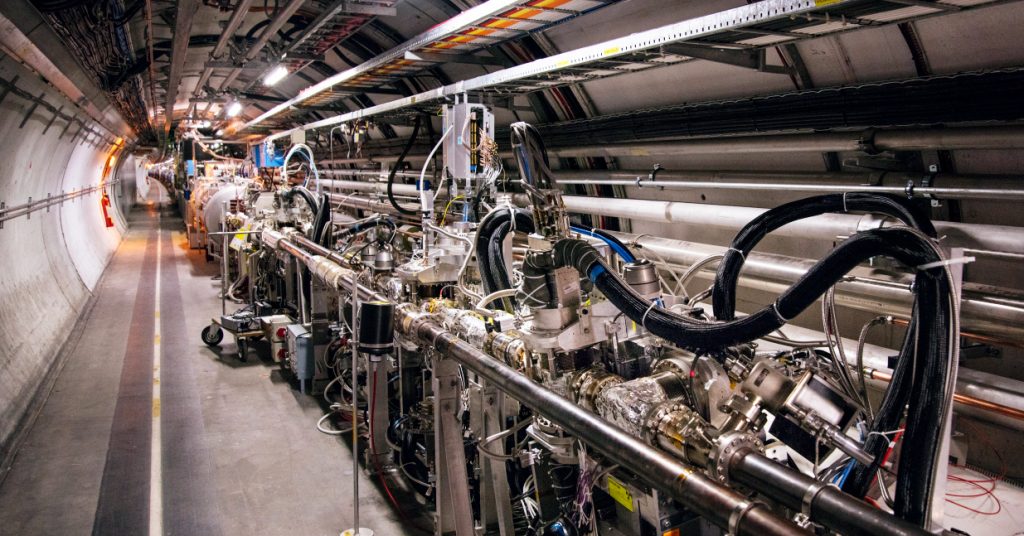 Part of the TOTEM installation in the LHC tunnel 220 m downstream from the CMS experiment. (Image: M. Brice/CERN)

While most high-energy collisions cause protons to break into their constituent quarks and gluons, roughly 25% are elastic collisions where the protons remain intact but emerge on slightly different paths (deviating by around a millimetre over a distance of 200 m at the LHC). TOTEM measures these small deviations in proton–proton scattering using two detectors located on either side of the CMS experiment 220 m from the interaction point , while DØ employed a similar setup at the Tevatron proton–antiproton collider.

At lower energies, differences in proton–proton vs proton–antiproton scattering are due to the exchange of different virtual mesons – particles made up of a quark and an antiquark. At multi-TeV energies, on the other hand, proton interactions are expected to be mediated purely by gluons. In particular, elastic scattering at low-momentum transfer and high energies has long been explained by the exchange of a pomeron – a “colour-neutral” virtual glueball made up of an even number of gluons.

However, in 2018, TOTEM reported measurements at high energies that could not easily be explained by this traditional idea. Instead, a further QCD object seemed to be at play, supporting models in which a three-gluon compound, or one containing higher odd numbers of gluons, was being exchanged. The results were sufficient to claim evidence for the odderon, although not yet its definitive observation. 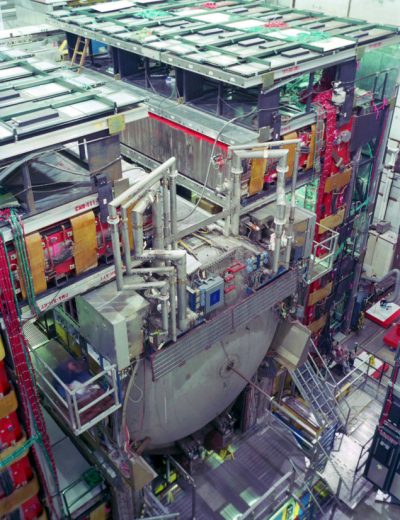 The new work is based on a model-independent analysis of data at medium-range momentum transfer. The TOTEM and DØ teams compared LHC proton–proton data (recorded at collision energies of 2.76, 7, 8 and 13 TeV and extrapolated to 1.96 TeV), with Tevatron proton–antiproton data measured at 1.96 TeV, and found evidence again for the odderon. When the teams combined the result with measurements at different scattering angles at 13 TeV by the TOTEM collaboration, the significance of the result was boosted to the discovery level.

“When combined with the measurements at 13 TeV, the significance of the result is in the range of 5.2–5.7 standard deviations and thus constitutes the first experimental observation of the odderon,” said Christophe Royon of the University of Kansas, who presented the results on behalf of DØ and TOTEM last week. “This is a major discovery by CERN and Fermilab.”

In addition to the new TOTEM-DØ model-independent study, several theoretical papers based on data from the Intersecting Storage Rings, the Super Proton Synchrotron, the Tevatron and the LHC, and on model-dependent inputs, provide additional evidence supporting the conclusion that the odderon exists.