Imagine you’re standing at one end of a long, windowless hallway. The only light is the beam from a flashlight in your hand, illuminating the length of the hall. In the beam’s path are two clear boxes: one right in front of you, the other at the far end of the hall. Because the beam’s light spreads out as it travels, the far box is lit only dimly, while the near box is blindingly bright. 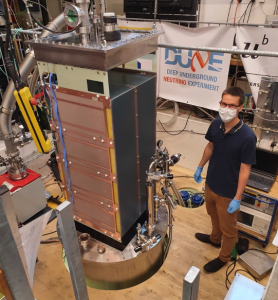 The ArgonCube collaboration assembled the first of four prototype neutrino detector modules for the DUNE near detector at the University of Bern in Switzerland. The module now is on its way to Fermilab for testing with a neutrino beam. Photo: Igor Kreslo

That, in a nutshell, is the difference between what the near and far detectors will see when the international Deep Underground Neutrino Experiment hosted by the U.S. Department of Energy’s Fermi National Accelerator Laboratory starts up later this decade. But instead of light from a flashlight, DUNE will send a particle beam through multiple detectors to tackle big mysteries in particle physics — including why the universe evolved the way it did.

At the heart of the experiment are elusive particles called neutrinos, which scientists will study using detectors underground at Fermilab in Illinois and the Sanford Underground Research Facility, or SURF, in South Dakota. The far detector, 800 miles (1,300 kilometers) from the source of the beam, will detect about one neutrino for every four hours of data collection — the dim light in our analogy. The near detector, about 2,000 feet (600 meters) from the beam source, will be bombarded with neutrinos, capturing about a dozen every second.

For the past six years, an international collaboration of more than 100 scientists and engineers from 31 institutions has been working on ArgonCube, a new type of detector that will make sure the near detector can successfully see all of the neutrino interactions clearly without “glare” from overlapping signals. A prototype is now traveling from the University of Bern in Switzerland to Fermilab for testing with the lab’s neutrino beams.

“A lot of people were involved, including a lot of students and postdocs,” said Michele Weber, who leads the team at Bern working on the near detector. “We’re all very excited about creating something new.”

Neutrinos come in three varieties, called flavors. But thanks to some of nature’s quantum shenanigans known as oscillation, they change flavor as they travel. DUNE’s near and far detectors will record what flavors make up the beam at the beginning and end of their journey from Fermilab to SURF. Looking at how the neutrinos change during their journey will give scientists clues about the fundamental building blocks of matter and how the universe began.

Two main innovations will help ArgonCube sort out a deluge of neutrino data. The first is a pixelated charge readout, which adds a third dimension to data collection. Current state-of-the art detectors such as ProtoDUNE, an enormous testbed for DUNE’s far detectors, use wires for charge collection. While powerful, these systems only create a 3D view of the particle interactions by overlaying several 2D images. In the flurry of chaotic and overlapping particle interactions in the near detector, the extra spatial dimension provided by ArgonCube will make it easier for scientists to tell apart near-simultaneous neutrino events. Each ArgonCube protype module has around 80,000 pixels.

The other ArgonCube feature that will help scientists distinguish between multiple neutrino interactions in the near detector is modularity. The final detector will be made up of 35 independent ArgonCube modules sharing a single cryogenic argon bath.

“Having multiple search volumes helps us see each single interaction separately,” said Weber. Despite the name, ArgonCube modules are actually rectangular. The prototype currently en route to Fermilab is nearly 6 feet tall with a 2.5-by-2.5-foot base (1.8 meters tall with about a three-quarter meter square base). The final modules for the near detector will be about twice as tall and 5 times bigger in volume. 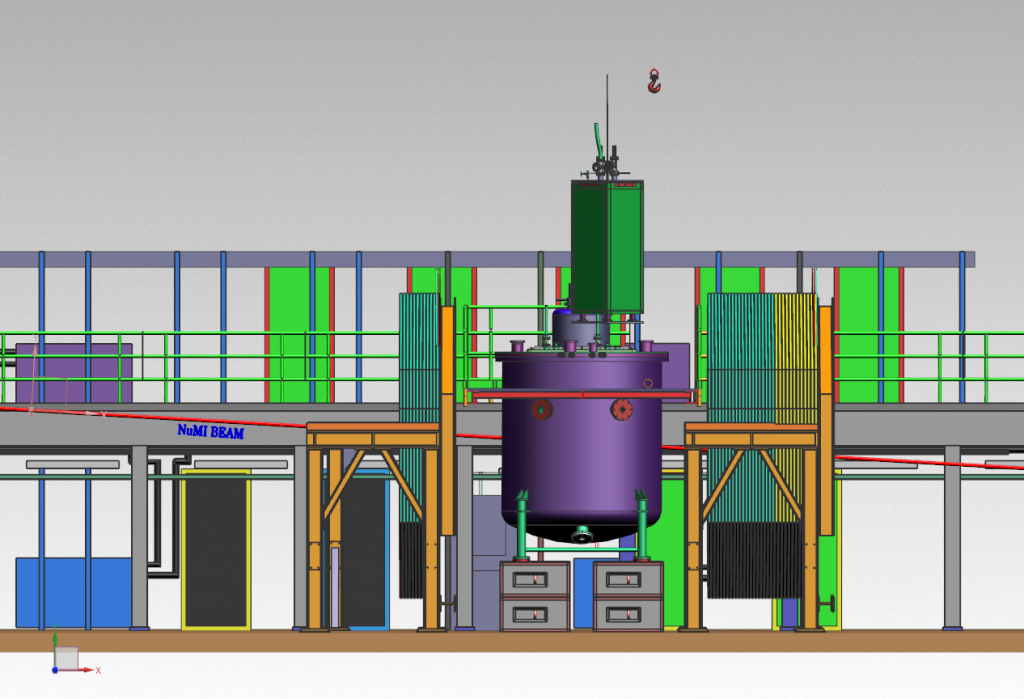 Four ArgonCube prototype modules will undergo testing with the NuMI neutrino beam, powered by Fermilab’s Main Injector accelerator. Each module is nearly 6 feet tall. The DUNE near detector will feature 35 modules, each one five times larger in volume than a prototype module. Illustration: Gary Smith, Fermilab

The modular setup means the charge and light produced by neutrino interactions won’t have as far to travel to reach the electronics that record them. Hence, the electric field voltage doesn’t have to be as high to draw those particles along. This reduces the demand on high-voltage supply and makes the detector easier and safer to operate.

That same module, with its accompanying cryogenic system, is now on its journey by truck and ship to Fermilab for the next phase of testing. This will be the first large DUNE prototype module to arrive at Fermilab. A second module will come in early fall, followed by two more by the end of 2021.

The Fermilab team plans to first test two ArgonCube modules side-by-side aboveground at the Liquid Argon Test Facility. There they will check the cryogenic systems and do initial troubleshooting related to connecting the modules and combining their signals. Then the team needs to work out how best to install and operate modules in tandem. The next step is to take all four modules 300 feet (100 meters) underground to the refurbished MINOS hall for testing with a neutrino beam powered by Fermilab’s Main Injector accelerator, known as the NuMI beamline.

“From one module to two and two to four is a big change,” said Ting Miao, the Fermilab scientist serving as project manager for the prototype installation and testing. “We want to flesh out all the details of operation and installation before we do things underground.”

The NuMI beam will simulate the intense onslaught of neutrinos that the DUNE near detector will see and make sure the detector can disentangle overlapping signals. Beginning next year, these tests will look at every aspect of the detection process — including beam timing, event selection and data processing. The results will confirm whether the modular approach works. They will help the ArgonCube team prepare for analyzing the data from the 35 full-size modules that will go into the final DUNE near detector.

Though it will be a few years before the ArgonCube technology fulfills its DUNE destiny, it’s already made remarkable strides since the idea for a next-generation modular neutrino detector was first sketched out during a coffee hour at Bern in 2014.

“The most amazing thing is to see the journey of this detector, coming together from first ideas on a blackboard and pieces of paper to recording particle events,” said Weber.

The international Deep Underground Neutrino Experiment hosted by Fermilab is supported by the DOE Office of Science.