The U.S. Department of Energy has formally approved the start of full construction for the PIP-II project, an essential upgrade to the accelerator complex at Fermi National Accelerator Laboratory. The heart of the project is a powerful new superconducting linear accelerator that will enable the world’s most intense high-energy neutrino beam.

The milestone, known as Critical Decision 3, authorizes the project to begin full-scale procurement and construction. It builds on the March 2021 approval for a preliminary construction start, which enabled work on key elements needing longer preparation times. This included cutting-edge technologies such as superconducting and high-power radio frequency systems and instrumentation. 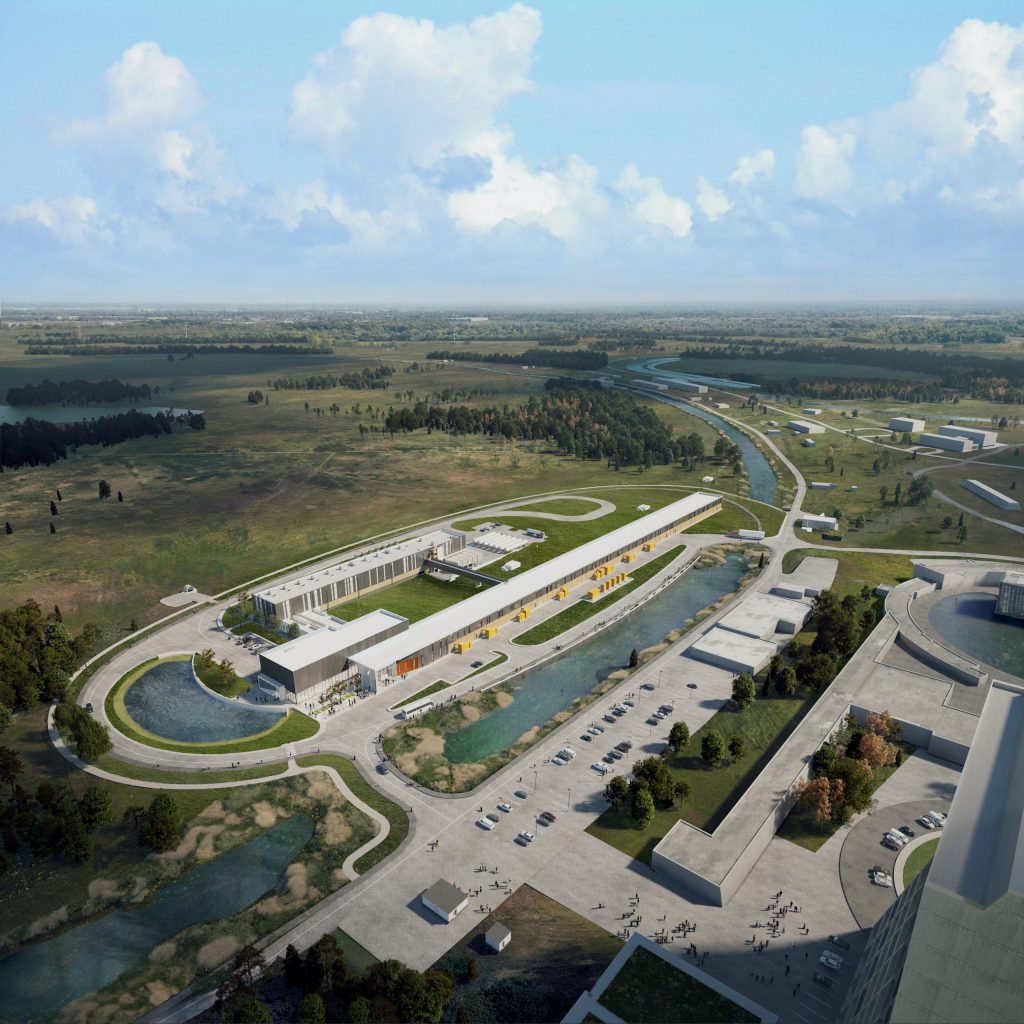 The PIP-II project received CD-3 approval from the U.S. Department of Energy. When complete, it will provide more powerful beams of protons to Fermilab experiments. This rendering shows the site of the PIP-II complex on the Fermilab campus. Image: Fermilab

“We are elated to have reached this crucial step for PIP-II,” said Lia Merminga, Fermilab director and former PIP-II project director. “Our team around the world has worked tirelessly to prepare for this moment. The planning has paid off, and we are excited to move into the construction phase, knowing it will make incredible new science possible.”

Of critical importance to PIP-II’s success are its partners around the world; PIP-II is the first particle accelerator built on U.S. soil with significant contributions from international collaborators. Institutions in France, India, Italy, Poland, the United Kingdom and the United States will bring together their expertise and capabilities in superconducting radio frequency and associated technologies to construct the state-of-the-art particle accelerator at Fermilab.

When PIP-II is complete, Fermilab will be able to generate proton beams greater than 1 megawatt—60 percent higher than current capabilities. The versatile accelerator is designed to support a variety of research and will be able to send customized proton beams to different experiments.

One crucial use of the beam will be to create neutrinos for the international Deep Underground Neutrino Experiment (DUNE) hosted by Fermilab. More than 1,000 researchers working on DUNE will study these elusive particles, which could hold clues to the evolution of our universe and several long-standing mysteries in physics.

“Fermilab’s accelerators powered experiments that made significant breakthroughs over the past 50 years,” said Nigel Lockyer, former Fermilab director. “The formal construction start for PIP-II means we are one step closer to enhancing our facilities and supporting the next 50 years of physics discoveries.”

In addition to refurbishing some of the lab’s existing accelerators, PIP-II will install a powerful new superconducting accelerator at the start of the accelerator chain. The unique first section will allow scientists to customize the beam for multiple experiments operating simultaneously. The accelerator will also use new advances in artificial intelligence and machine learning to deliver beam quickly, reliably and with minimal human intervention.

The PIP-II collaboration is an international team made up of scientists from France, India, Italy, Poland, the United Kingdom and the United States. Photo: Fermilab

PIP-II is expected to be complete in the late 2020s, and the project has already reached several milestones. Construction on the building that will house the cryogenic plant — a major in-kind contribution from a PIP-II partner agency, India’s Department of Atomic Energy — and utilities for the superconducting accelerator are nearly complete at Fermilab, and successful tests at the PIP-II Injector Test Facility validated critical technologies and demonstrated the exceptional performance of two cryomodules, the building blocks of the accelerator.

“The successful review shows yet again that Fermilab is poised to be a worldwide leader in accelerator-based discovery neutrino science, and PIP-II will be an essential contributor to the lab’s prestige. The Department of Energy looks forward to the decades of discoveries that will be made possible by this accelerator upgrade,” said DOE acting HEP director Harriet Kung.

Fermi National Accelerator Laboratory is America’s premier national laboratory for particle physics and accelerator research. A U.S. Department of Energy Office of Science laboratory, Fermilab is located near Chicago, Illinois, and operated under contract by the Fermi Research Alliance LLC, a joint partnership between the University of Chicago and the Universities Research Association, Inc. Visit Fermilab’s website and follow us on Twitter at @Fermilab.