How long have you been at the U.S. Department of Energy’s Fermi National Accelerator Laboratory?

I joined on the eighth of November last year, 2021. 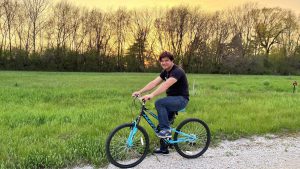 Pathak on his bicycle on Fermilab’s campus. Photo: Abhishek Pathak

Later, with time, [I became interested in physics.] Maybe it was because of one of my teachers; he was really good at physics. He taught physics as if it’s happening in front of you. That’s how I got curious in physics, and then I left biology and started doing physics.

What are the projects you’re working on now at Fermilab?

In PIP-II, I’m working on the beam dynamics in the superconducting linac section: basically, characterizing the beam as it propagates through the linac in terms of how the beam quality changes when it propagates along.

Is there anything that you are most excited about for PIP-II in the future?

Nowadays, you notice machine learning and artificial intelligence are one of the upcoming algorithms that people have been using in different fields. I would like to incorporate that, too. In my department, we tune linacs for better beam quality. But these tuning algorithms, some of them take a really long time. If you use one of these learning algorithms, like machine learning, they can expedite the process. That’s the next step that I would like to take. I like physics; I like programming as well. So it’s kind of like merging two things that I like, and that’s great.

What’s the most rewarding part of your job?

This is the thing I wanted to do. I did my PhD in the field of accelerator physics. Specifically, I used to work with proton linacs, and I used to work in the beam dynamics part. Working at Fermilab was kind of a dream; it’s one of the best accelerator physics labs. So, first of all, I’m here. Second, I’m working in the field that I wanted to work in. Having a freedom so I can use my imagination, my ideas — that’s what makes me feel great.

What obstacles have you overcome in your life?

I have a sight issue, and I have to work on computers for eight to 10 hours. So, that gives some strain. That’s all, nothing else. This is by birth; it’s not through an accident or anything like that. I had more problems when I was dependent on a blackboard [in school] because I used to sit in a class and couldn’t see things on the board. Compared to others, I had to spend more time and put in more effort to finish a particular task or chapter. I read slowly, but I finished stuff.

What do you like best about working at Fermilab?

So far, everybody I’ve interacted with is so cooperative. It’s difficult, coming here [from India]. I didn’t expect it to be so smooth, my transition, because there’s so many formalities and things you have to go through when you basically switch your country. But starting from my visa process, everything was so smooth; Fermilab took care of everything.

And people listen when you have an opinion toward anything. At some places, you have this hierarchy: you have junior and senior [employees], and people don’t listen to junior [employees]. I’ve seen such places. But it’s nothing like that here.

What do you like to do when you are not at work?

I like cooking, and I like going out to eat. I take my bike to different places — around the lab only. I haven’t gone [beyond the lab] so far; the lab itself is pretty big. And I go bowling with my friends.

What is your favorite thing to cook?

In India, we have what you call aloo paratha. You make a dough out of whole wheat flour, stuff it with potato filling, and that filling is spicy. Then you roll it and then you cook it.

What is your favorite place to bike around Fermilab?

Around lakes — there are so many lakes. If you’re going around that, you’ll find this nice breeze. That’s nice, especially on Saturdays and Sundays when nobody is around.

I find, here, the sky is so different. Normally, you have pollution and whatnot … you get this gray sky. Here, it’s blue. I like that. When you have these white clouds scattered around in a blue sky, it’s so beautiful.