Around a mile below the surface in South Dakota, construction crews are hard at work excavating around 1,000 tons of rock per day. Their goal is to make room for a large underground facility that will house an international effort aimed at studying neutrinos—highly elusive subatomic particles that may hold the key to many of the universe’s secrets.

The Long-Baseline Neutrino Facility will one day be home to the international Deep Underground Neutrino Experiment, hosted by the U.S. Department of Energy’s Fermi National Accelerator Laboratory. LBNF/DUNE involves more than 1,000 scientists and engineers from over 30 countries. 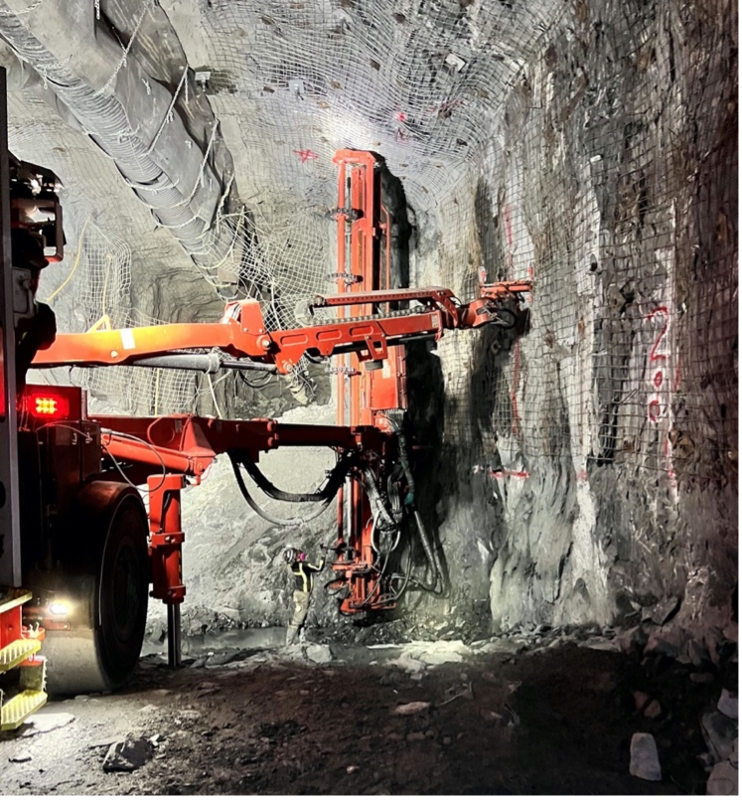 A construction miner stands near a bolter, a huge machine that installs 20-foot-long rock bolts in the caverns that will house the Deep Underground Neutrino Experiment. About 16,000 bolts will need to be installed to provide ground support in the gigantic, seven-story-tall caverns a mile underground. Photo: Jason Hogan, Thyssen Mining Inc.

DUNE has three main scientific aims: determine whether neutrinos might hold the key to the matter-antimatter asymmetry that gave rise to our matter-filled universe; look for neutrinos that indicate the birth of a neutron star or black hole, two of the most mysterious objects in space; and search for subatomic signals that could help scientists develop a theory that unifies the four forces of nature.

“DUNE is a unique experiment,” said DUNE co-spokesperson Sergio Bertolucci. “It is the only experiment where you can measure all the parameters of neutrino oscillations in the same place. This will enable us to perform precision measurements of the mass ordering, of the matter-antimatter symmetry violation and of the mixing angles.”

LBNF provides the space, infrastructure and particle beam for the experiment: the caverns that will house DUNE’s detectors—a near detector at the Fermilab site, and a far detector 800 miles away at the Sanford Underground Research Facility in South Dakota; the space for cryogenic equipment to keep these instruments cold; the hall where neutrinos are produced; and the beamline that will deliver the protons that make the neutrinos.

PIP-II, the Proton Improvement Plan II at Fermilab, will power the particle beam for the experiment. At the heart of PIP-II is the construction of a 700-foot-long particle accelerator that will boost a stream of protons to 84% of the speed of light. The construction of the first of two large buildings for PIP-II is almost complete. When operational, PIP-II will feed its protons into a chain of accelerators to create the world’s most intense neutrino beam.

Excavation is in full swing

“It doesn’t matter how many times you see it—these caverns are gigantic. It’s very impressive to see.” – Josh Willhite

To date, approximately 274,000 tons of rock have been removed—more than a third of the whopping 800,000 tons that needs to be extracted from a mile underground. About 200 people in South Dakota directly work on LBNF during this phase of the project.

Once complete, the underground facility with its three caverns will cover the area of about the size of eight soccer fields. Two of the caverns are about 500 feet long, 65 feet wide and 90 feet high—about the height of a seven-story building. These caverns will house the far detector modules, each of which will be more than 200 feet in length and contain 17,000 tons of ultrapure argon cooled to minus 184 degrees Celsius. The third cavern, which is about 625 feet long and 65 feet wide but is only 36 feet tall, will contain the cryogenic support systems, detector electronics and data acquisition equipment.

The excavation of each cavern proceeds from the top to the bottom. The process is carried out by contractor Thyssen Mining Inc. and uses the so-called drill-and-blast technique. First, construction workers drill a series of holes, then load those holes with explosives that will blast away the rock. The workers then remove the blasted rock and transport it to large buckets called skips, which travel up a mile-long shaft to bring the rock to the surface. Once the rock is above ground, it is crushed, put on a conveyor, and then deposited into a former open mining pit called the Open Cut.

Next, workers move into the excavated space to conduct ground support, which involves operating gigantic drills that insert 20-foot-long bolts into rock walls as anchors. Miners will install a total of about 16,000 rock bolts to secure all walls and ceilings of the excavated space.

“These secure the rock because sometimes, in the process of blasting, you create fractures in the surrounding rock, or there’s existing fractures,” said Syd De Vries, a mining engineer at Fermilab. “That creates zones of weakness, so you install these rock bolts, along with a wire mesh that secures the rock so that it’s safe to go in and repeat that cycle.”

Once the ground support is complete, the drill-and-blast cycle begins anew. Some of the underground work can be carried out in parallel, with approximately 30 miners per shift working at different locations.

The drill-and-blast phase will be complete in the fall of 2023. “That’s the last time we’ll use explosives,” said Josh Willhite, a mechanical engineer who grew up in South Dakota and started working on the early plans for this project in 2010.

To complete the construction of the caverns, the floors and walls will be covered with concrete—and that work is expected to continue until May 2024.

Advances at all levels

While the excavation work proceeds, another set of contractors is preparing for the building and site infrastructure phase. During this phase, the LBNF space will be outfitted with the infrastructure needed to run the DUNE detectors. This includes setting up the lighting, electrical equipment, ventilation and piping that will direct argon delivered at the surface to the detectors deep underground.

Prep work is paying off

Before the drill-and-blast process could begin in South Dakota, the project team completed the pre-excavation phase, during which the LBNF far site was prepared for the excavation. It involved, among other things, renovating the Ross Shaft, updating the rock crushing system and building the 3/4-mile-long conveyor system that moves the rock from the shaft to the Open Cut. “That was a pretty major scope of work,” Willhite said. “Seeing all that functioning and working properly once we got into excavation was pretty exciting.” 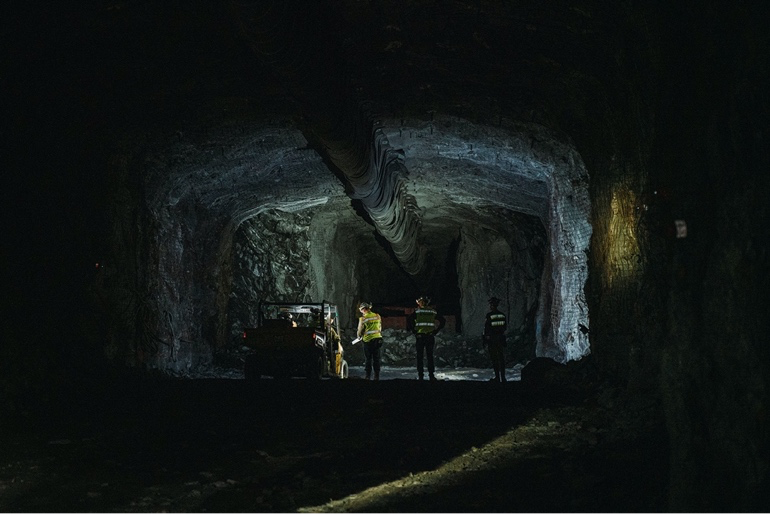 Work in progress: About 800,000 tons of rock need to be removed to create the seven-story-tall caverns and the connecting drifts for the LBNF far site location in South Dakota. Photo: Adam Gomez, SURF

During that phase, engineers also drilled a series of core samples to determine the geological characteristics of the rock, such as its strength and the presence of fractures, as well as the stresses that were present. Stresses on the rock exist both in the vertical and horizontal planes. The deeper you go, the greater the weight of the rock becomes, creating stress in the vertical plane. Horizonal stresses are caused by things like the tectonic activity of the Earth.

This diligent pre-excavation work has paid off. Project managers think that any big issues would have come up during the first year of excavation, but so far, the miners have successfully excavated the tops of all three caverns and have opened one of the caverns to its full width without any major setbacks. “The sensors that have been installed and are monitoring the rock movement are all following the predicted paths,” said De Vries. “That gives everybody a higher sense of security.” The monitoring, of course, continues, and the safety of all workers remains the project’s top priority.

Breaking the 625-foot-long utility cavern to its full length, then being able to walk along it, was an amazing feat, Willhite said: “It doesn’t matter how many times you see it—these caverns are gigantic. It’s very impressive to see.”