The Fermilab-hosted international Deep Underground Neutrino Experiment will shoot the world’s most powerful beam of neutrinos from the Department of Energy’s Fermilab in Illinois to detectors 800 miles (1,300 kilometers) away at the Sanford Underground Research Facility in South Dakota. Data collected from this ambitious experiment will help scientists answer such lofty questions as how black holes form and why the universe itself exists.

But in order to make this groundbreaking project happen, a lot of literal ground will have to be broken.

Now, Fermilab contractors working on the construction of the Long-Baseline Neutrino Facility in South Dakota have successfully tested a system that will move almost 800,000 tons of rock over the course of three years to make room for DUNE’s massive underground detectors. The system will use a combination of refurbished mining hoists and a new conveyor belt system to bring rock up from the LBNF excavation area nearly a mile underground and send it to a former open mining pit three-quarters of a mile away in Lead, South Dakota.

“LBNF is a long project, and that’s why we’re excited to start the excavation work for the detector caverns. We want to start building the detectors as soon as possible,” said Chris Mossey, Fermilab deputy director for LBNF/DUNE-US. 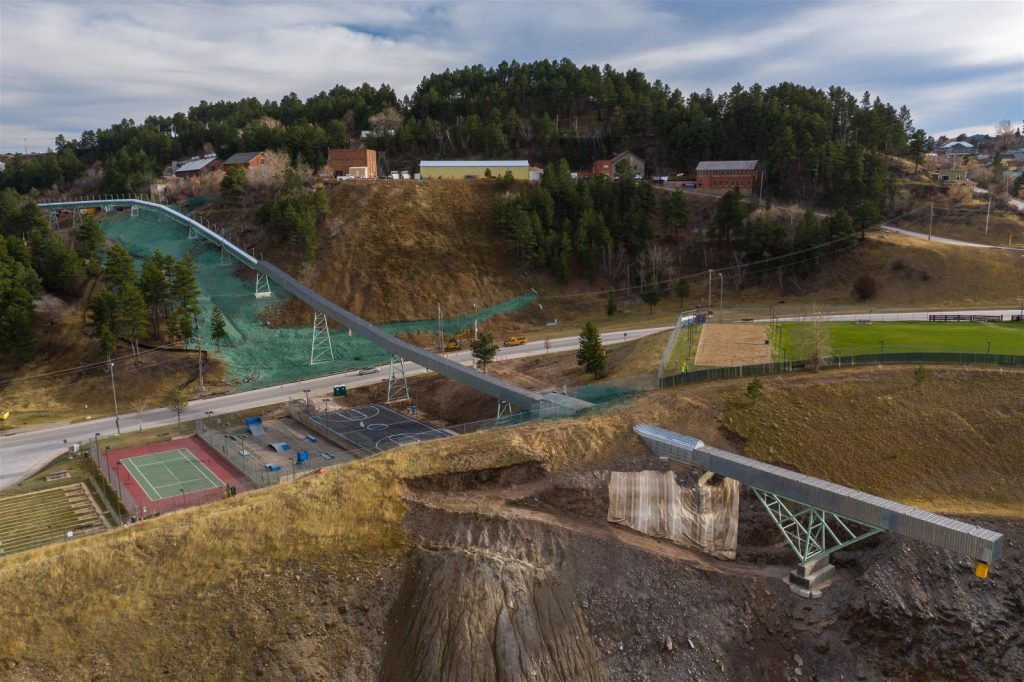 The conveyor belt taking the rocks from the crusher to the Open Cut passes close to the town of Lead, South Dakota. Image: Fermilab

LBNF encompasses all of the infrastructure that will support the DUNE collaboration, including caverns for four liquid-argon detector modules, each as tall as a four-story building and as long as a football field. The detector modules will be installed 4,850 feet (1,480 meters) underground — the depth made possible by Sanford Lab’s former life as a gold mine — to shield the experiment from cosmic rays.

Excavated rock from the LBNF construction will go through underground chutes into skips — essentially giant buckets — that will be hoisted up Sanford Lab’s Ross Shaft to a rock crusher in the Ross Headframe, on the surface. After being crushed, the rock will be dumped into a giant bin. The bin will feed the rock onto the first of two underground conveyor belts that will take it out of the mountain, down the mountainside and to the huge Open Cut. The entire system is designed to move about 3,000 tons of rock per day.

The hoists, first built in 1934, were recently upgraded with new digital controls to get them ready for LBNF construction. The conveyor belts start off following the same path as an old mine tramway through the mountain but take a different path down the side of the mountain to bring the rock to a new destination.

“The new thing is that we’re taking rock to the Open Cut. When the Open Cut was being mined in the 1980s, the miners were doing the opposite, bringing rock from the Open Cut over to the mill system,” said Josh Willhite, the Fermilab Long-Baseline Neutrino Facility far-site conventional facilities design manager. 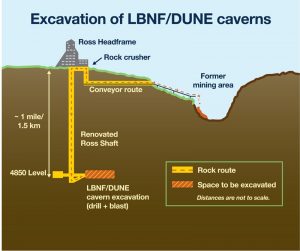 This graphic shows the route that the rock will follow from the LBNF/DUNE excavation to the Open Cut pit. Image: Fermilab

Two different conveyor belts will transport the rock 4,200 feet (1,280 meters) from the crusher to the Open Cut. The first, covering about 60% of the total distance, runs entirely underground. The second is mostly aboveground, at one point passing over a state highway. Parts of the second belt curve to accommodate the mountain terrain while minimizing the number of times the rock is transferred to a new belt so that fewer noise and dust controls are needed.

The fact that the conveyor system, built by contractor Kiewit Alberici Joint Venture, is in a populated town was taken into account in the conveyor design: It has controls for dust and noise, and the conveyor operates only during weekdays (though the hoists will bring rock up the shaft more or less constantly during the excavation).

As enormous as 800,000 tons sounds — it’s twice the weight of the Empire State Building — the rocks from the LBNF excavation will fill less than 1% of the Open Cut, which is 1,200 feet deep.

The first step in commissioning the rock transportation system was a dry run to make sure all of its parts work and to break in the conveyor belts. Now, the system has successfully been tested with 1,600 tons of rock dug up during pre-excavation projects. It’s the culmination of eight years of work for Willhite and the far-site conventional facilities team.

“We’re thrilled to say, ‘Hey, this step is complete, and it’s a big deal!’ And more importantly, it allows us to do the main construction,” Willhite said.

Thyssen Mining, the company contracted to excavate the main LBNF caverns, started moving their equipment underground in April. Their first scheduled blast for the main excavation will be in late June. It will take about three years to excavate the caverns before construction can begin on cryogenics for the neutrino detectors.

“This world-class facility will enable the world’s neutrino science community to research some of the fundamental unanswered questions in physics.”

Mossey said the investment that the Department of Energy is putting into constructing a huge facility 800 miles away from Fermilab speaks to the fact that the impact of LBNF/DUNE will go far beyond the lab hosting it.

“This world-class facility will enable the world’s neutrino science community to research some of the fundamental unanswered questions in physics,” he said. “It’s a privilege to be a part of the team effort that is going to have that type of reach and impact.”

The Long-Baseline Neutrino Facility and Deep Underground Neutrino Experiment at Fermilab is supported by the DOE Office of Science.