Even though the U.S. Department of Energy’s Fermi National Accelerator Laboratory is known for its novel particle physics experiments, there’s more to its charm than neutrinos and muons. The lab sits on 6,800 acres of land, and Fermilab’s natural areas are an essential part of the experience of being at the lab.

As part of the National Environmental Protection Act, Fermilab’s Roads and Grounds department is tasked with planning for and restoring the surrounding woodlands, prairies, grasslands and savannah. As Walter Levernier, Fermilab’s resident ecologist, noted, Fermilab’s history of conservation began with the laboratory’s founding director, Robert Wilson.

The restoration work is a mix of restoring remnant communities of plants that may still exist but haven’t been maintained, as well as recreating communities that may no longer be present at all, said Patrick Chess, the natural resource manager with the Forest Preserve District of Kane County. In the surrounding tall grass prairie and oak woodland on site, restoration efforts include controlling non-native invasive species, such as buckthorn or honeysuckle, which may have invaded native habitats.

“Prescribed fires are one of the biggest tools that we have in our toolbox to help us achieve those goals,” said Chess. The prescribed burn refers to the use of controlled fire by a team of fire experts and ecologists under specific weather conditions and within specific areas to restore the health of an ecosystem. 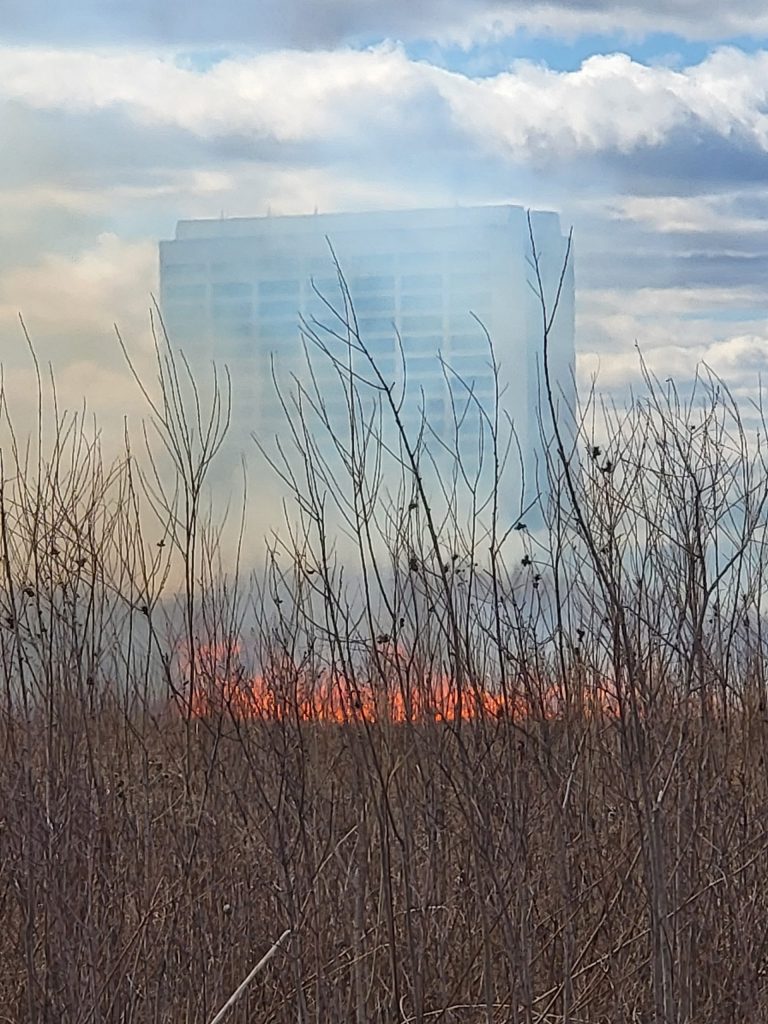 Prescribed burns, conducted in the spring and fall, are one of the primary tools available to help achieve Fermilab’s habitat restoration and conservation goals. Photo: Christopher Williams, Fermilab

According to Chess, the fires help control the number of invasive species, flush nutrients back into the soil and help the growth of native species. In the woodlands, for example, there is sometimes a thick oak overstory where they would have been a fairly open canopy. For a rather shade-intolerant species like the oak, it means that not enough sunlight reaches the germinating acorns. In turn, it also means that shade-tolerant native trees like cherries and maples dominate the land, explained Chess.

As a result, fires are one of the most useful tools when it comes to maintaining natural areas and their biodiversity.

William Alvarez, the Roads and Grounds manager, along with Levernier, maps out the prescribed burn plans and calendar at Fermilab. To create the burn plan, the team creates a list of land management units to decide which areas will be burned during the fall through to the spring. On average, Levernier suggests that an ideal burning cycle would be every two to three years for prairies and four to five years for woodlands.

The prescribed burn plan also requires taking wind speed, direction, humidity level and elevation all into a count, to make sure the burns are safe and efficient. For example, woodland fires require a higher wind speed at around 15 to 18 miles an hour, so that the stronger wind can blow the fire into the thick woods. Prairies, on the other hand, require lower wind speeds at 10 to 12 miles per hour.

With these large fires and plumes of smoke, it would not be out of question for Fermilab employees and passersby to grow concerned at the sight of billowing fire making its way across campus. As a result, a crucial part of the burn plan includes calling in the fire chief during planning meetings so that the lab’s fire department knows where and when exactly the burns will be carried out. Depending on which LMUs are being burned, emails are sent to relevant people to communicate which buildings may be impacted by smoke and so those on campus are not alarmed at the sight. Out in the field on the day of the burn, the burn boss takes control of calling Fermilab security and the fire department to let them know a fire will be starting, so that they can be called in at a moment’s notice.

To manage the fire, the teams repeatedly mow fire brakes, which are strips of land that create a border and contain the fire by not letting it pass. As Levernier explained, the process usually starts with back burn, which is a fire that pushes against the wind.

Fires are one of the most useful tools when it comes to maintaining natural areas and their biodiversity.

“Wind direction is crucial. Starting with a back wind burn is key because as the fire moves into the wind, it moves slower making the flames smaller and more manageable,” said Levernier.

As back-burning begins, the 2- to 3-foot flames are backed into the wind that is moving toward the fire. Alvarez explained that the burns are done 10-foot-wide swaths at a time to create enough of a black area so that the fire doesn’t hop over.

The team uses drip torches to start the burn. A couple of drops of fuel are poured onto the grass and lit with a match before the tip of the drip torch is stuck in. As Alvarez walks around, the torch drips, creating little balls of flame to start the fire.

“You want to get enough ‘black area’ or burned area in so that by the time you get around to lighting the head fire where the wind is pushing the fire away from you, it will meet with the area that has already burned far enough away from the unburned material that it won’t jump across,” said Alvarez.

While some elements like creating breaks to make sure the fire doesn’t escape are essential for any prescribed burn, Chess noted that the different habitats require different conditions and fuels for a burn. The prairies burn much more intensely because their burns consist of burning six to eight feet tall grasses versus leaf litter burning in the woods.

Ultimately, burning the land promotes good soil health and root stimulation, which helps plants grow, as well as creating more favorable conditions for insect and microbial populations. It also prevents invasive species from taking over, as non-native plants tend to not be fire-resistant, unlike native plants that have adapted to resist fire. The native burr oaks that grow in the Fermilab grassland are a good example of trees that are initially not fire-resistant but can grow to be as they mature, and so they need to be dealt with in their infancy before they begin to overtake the grasslands.

As the fire warms up and clears away the surface, it becomes easier to sow seed into a prairie after it has been burned, said Levernier.

While there often are concerns about carbon emissions being released as a result of prescribed burns, Chess pointed out that burning plants does not affect the rich, long-term carbon storage of the roots. Even as these fires cause an increase in carbon emissions, the net positive of the carbon that prairies store throughout the year is more beneficial. But maintaining the health of the land is essential to ensuring optimal carbon storage.

“In order to properly manage a grassland, you’ve got to burn it. Otherwise, you’re in that constant successional battle with woody species coming in. And so, fires are the great equalizer that keep the grasslands open,” said Chess.