Editor’s note: At 4:40 p.m. today, the neutrino detection system was placed inside the SBND detector hall after a successful move.

After years of construction, testing and planning, an exciting move is currently underway at the U.S. Department of Energy’s Fermi National Accelerator Laboratory.

A neutrino detection system built for the Short-Baseline Near Detector will travel 3 miles today, Dec. 1, from the warehouse-like building in which it was constructed to its final home in the SBND detector hall. There scientists will use a beam of particles called neutrinos to examine the collisions of these particles with atoms. Their goal is to learn more about the mysterious properties of neutrinos.

Moving the system is no easy feat. As a nearly 20-foot cube, it’s the size of a small house. It weighs 20,000 pounds and contains delicate sensors and wiring that, if rattled too much, could compromise the integrity of the system. 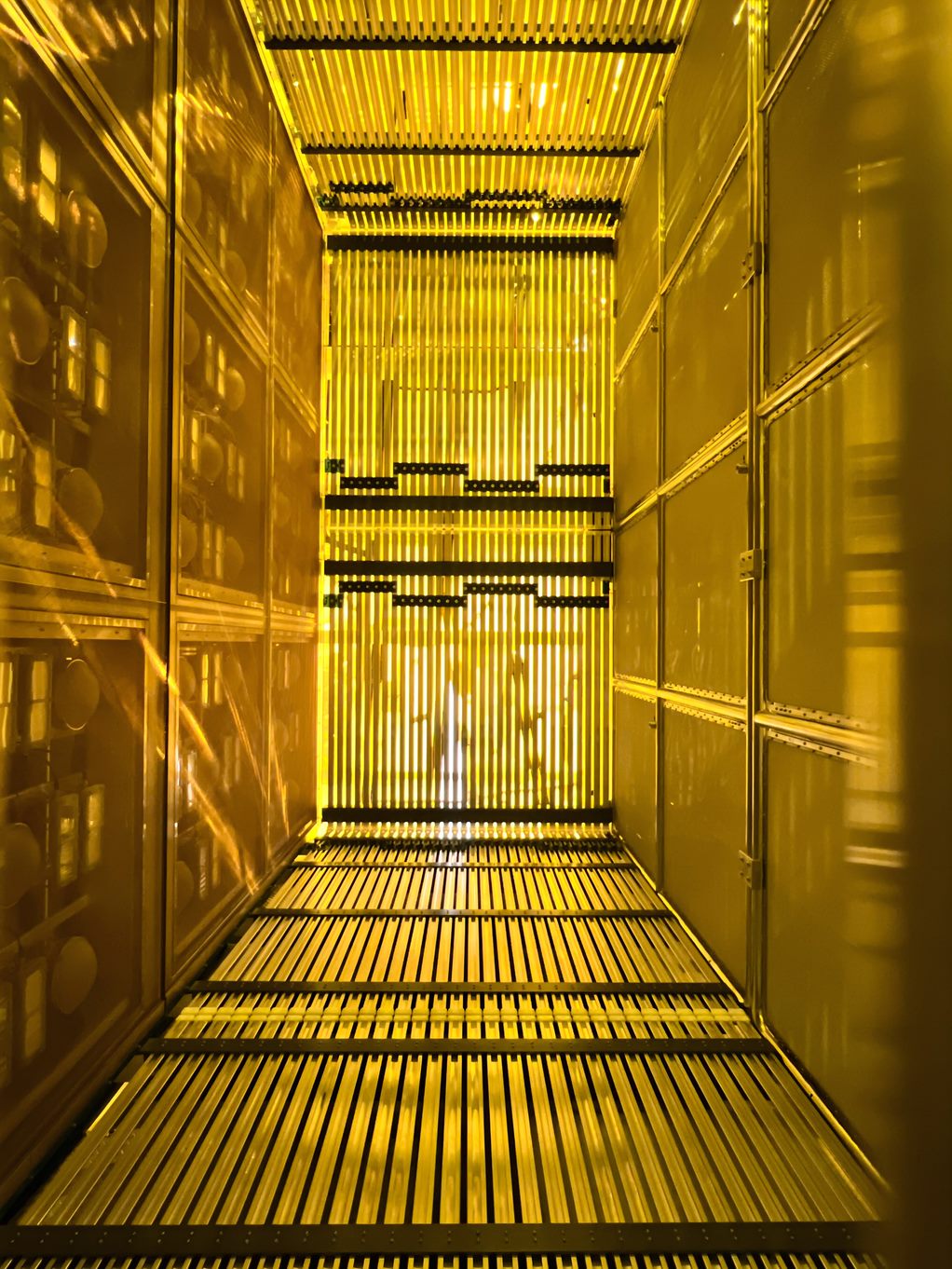 The neutrino detection system built for the Short-Baseline Near Detector will travel 3 miles across the Fermilab site in Batavia, Illinois. Photo of detector in the transportation frame. Photo: Monica Nunes, Fermilab

Scientists, engineers and Fermilab personnel have anticipated this move for years and spent countless hours preparing for it. Now is the day. The move began at 6 a.m. and is projected to take 8 to 10 hours. Staff began by rolling the detector system through a large roll-up door with just inches of clearance to spare. Next, they will load it onto a flat-bed trailer using a crane. The public can get updates on the move through the lab’s social media platforms.

Once in place on the trailer, the truck will move at a maximum speed of about 2.5 miles per hour on its 3-mile route through the Fermilab campus to the detector hall, where the crane will lift it from the trailer and back onto solid ground. Finally, crews will roll the detection system through a garage door into its new home.

In the coming months, the system will be placed inside a large cryostat, a vessel to cool the system to low temperature that will be filled with liquid argon and complete SBND. In fall 2023, scientists expect to begin receiving data that will shed light on the strange behavior of the ghostly neutrinos.

A large group of people — including scientists, engineers, riggers and safety personnel — have meticulously planned the move for years — even from the very conception of the detector. Now they are excited that the process is finally coming to fruition.

“It’s like taking your baby to the first day of school,” said Fermilab’s Shishir Shetty, a mechanical engineer who helped design the transport system. “So many people have put their time and effort into building the detector and planning for the move, and now we are finally at the point where we get to see the results of those efforts.”

Measurements that have never been done before

SBND will play a key role in understanding neutrinos: subatomic particles that have very little interaction with matter but that could hold the answers to many mysteries surrounding our universe. So far, scientists have discovered three types of neutrinos. SBND, as part of Fermilab’s Short-Baseline Neutrino Program, will help confirm or refute the existence of a potential fourth kind, called a sterile neutrino.

The Short-Baseline Neutrino Program analyzes a neutrino beam with three liquid-argon time projection chamber detectors, including the new SBND. (It is the same technology that scientists will use for the much larger detectors of the Deep Underground Neutrino Experiment.) The three detectors measure the neutrinos as they travel along a straight path, searching for signs of oscillations — the way neutrinos transform into various types as they travel. At 110 meters from the beam source, SBND is the closest detector and will help scientists better understand the original composition of the neutrino beam. (The other detectors are MicroBooNE at 470 meters away and ICARUS at 600 meters away.)

Scientists can predict how many neutrinos and which types of neutrino they should expect to see if they know the original beam composition with high precision. A discrepancy could provide evidence for the existence of sterile neutrinos, or it could lay the groundwork for the discovery of new particles in beyond-the-standard model physics.

“This will give us a dataset that will be 20 to 30 times larger than the current neutrino-argon interaction data set, which will allow us to do measurements that have never been done before,” said Ornella Palamara, a neutrino scientist at Fermilab and co-spokesperson for the international SBND collaboration.

Building the detector within a transport frame

SBND was first proposed in 2014. Construction of the detection system, which involved scientists from around the world, began in the following years. Parts began to arrive at Fermilab in 2018.

From the beginning, scientists and engineers knew the detection system couldn’t be built in the detector hall. They needed a large assembly building to construct the system — which consists of anode and cathode wire planes, as well as light detection systems — before it would be placed in the experiment’s large cryostat, located inside Fermilab’s Booster Neutrino Beam. The cryostat will be filled with liquid argon.

“It’s like taking your baby to the first day of school. So many people have put their time and effort into building the detector and planning for the move, and now we are finally at the point where we get to see the results of those efforts.” – Shishir Shetty, Fermilab mechanical engineer

So the team began to assemble the system in the DZero Assembly Building at Fermilab and designed and built a transport frame that would house the system from the start. To build the steel frame, the engineering team had to ensure it both supported the heavy detector system, which hangs from the top beams of the frame, while also ensuring it could be easily moved when the time came. The frame includes outriggers for support, a towbar for pulling, transport stops to prevent the detector from swinging, and a hinged door to remove the system once it arrives in the detector hall.

To help with transport, the detector system itself sits on moving devices called Hilman rollers. In the days before the move, Fermilab staff laid down steel plate tracks for the rollers to ensure minimal friction. To move it out of the building, the frame was pulled out with a fork truck onto the plates, up a ramp, and out of the building, while another fork truck acted as a brake behind the frame. A specially designed guiding system along the ramp ensured that the rollers didn’t deviate from their tracks.

The frame with the detection system — completely wrapped in black plastic to protect the light-sensitive detector components — moved through the building’s garage door with only inches of clearance. Once outside the building and lifted onto a flatbed trailer, the frame will be driven to its new home.

This past summer, scientists and engineers conducted three trial runs to find the best transport route. They loaded up the trailer with 66,900 pounds of concrete blocks, corresponding to the weight of the detector and transportation frame. They then used accelerometers and inclinometers, including iPads, to monitor the route’s bumps, as well as the trailer’s roll and pitch around turns.

Because the detector system has a high center of gravity — about 10 feet up — engineers needed to ensure that the route did not include any inclines or turn angles that would change the level of the trailer more than 5 degrees.

“During transportation, we need to keep everything aligned,” said Monica Nunes, a guest scientist who coordinated the SBND assembly. “The detector was built to be transported, but a move like this — with a system that has such a high center of gravity — has never been done at Fermilab before.” 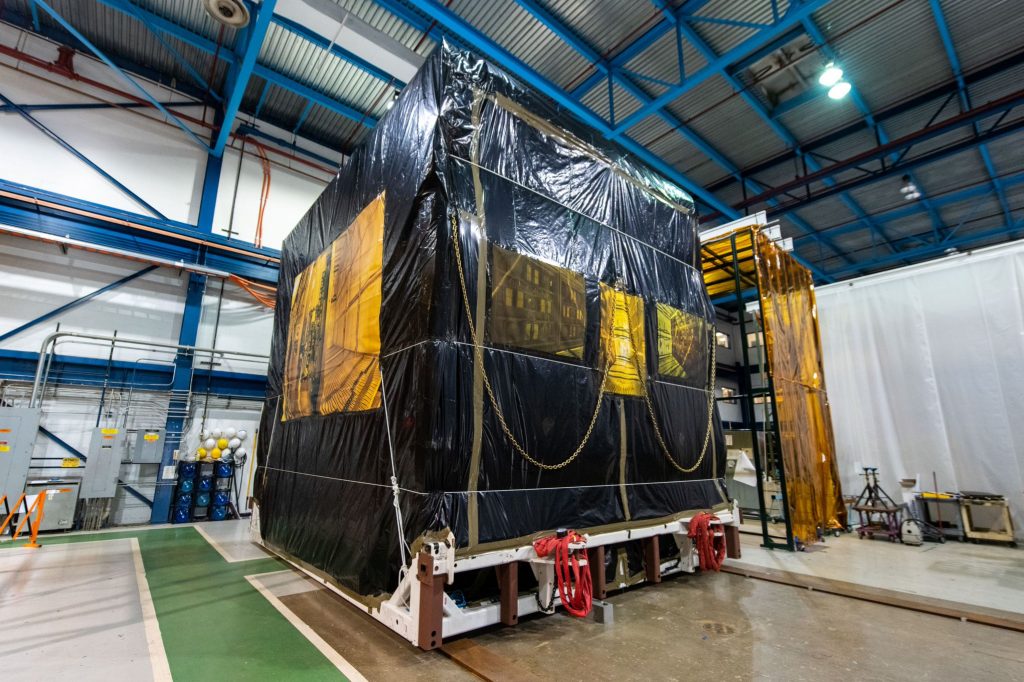 The detector was wrapped in protective coverings prior to its move. Photo: Ryan Postel, Fermilab

The data showed that the preferred route was along Fermilab’s Ring Road. At a maximum speed of about 2.5 miles per hour, and with an escort from Fermilab security, this part of the transport is expected to take about 90 minutes. Scientists and engineers will be walking alongside the truck as it moves, monitoring the load real-time with accelerators and inclinometers that will transmit data to their cell phones.

The route has been well prepared. In the days before the move, Fermilab’s Infrastructure Services Division inspected the road for potholes, trimmed trees and removed powerlines to ready the route.

“Many people at Fermilab have worked together to make this happen — physicists, students, technical staff, administration, procurement,” said Anne Schukraft, neutrino scientist and SBND technical coordinator. “It has been great to get everyone’s input and to learn from everyone’s expertise. It has been a true team effort.”

“That is when we will be extremely happy,” Shetty said. “You will see a lot of smiles.”

In the coming days and weeks, Fermilab scientists and engineers will unwrap the detector, set up outriggers, and install fall protection to be able to work safely on top of the detector. They will also test each of the subsystems to ensure they were not compromised during the move.

In the coming months, the detector will be fitted with a top cap and placed inside the cryostat. Next summer, the cryostat will be filled with liquid argon. Scientists will test the system to characterize the signals it receives before it begins receiving real data from the neutrino beam in the fall of 2023. Ultimately, SBND will record over a million neutrino interactions per year.

“To finally have data will be really exciting,” Palamara said. “We have been working toward this for eight years.”