From Physics, Nov. 23, 2015: The mass of the recently discovered Higgs particle is one of the greatest mysteries in present-day particle physics.

Physicists looked at gobs of data on planetary orbits to look for tiny anomalies that couldn’t be explained by either Isaac Newton’s theory of gravity — in which gravity is a force between objects that depends on their masses — or Einstein’s general relativity theory, which says gravity is a warping of space-time itself. 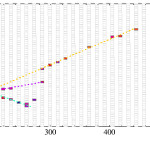 In a landmark study, scientists at Delft University of Technology in the Netherlands reported that they had conducted an experiment that they say proved one of the most fundamental claims of quantum theory — that objects separated by great distance can instantaneously affect each other’s behavior.