From Argonne National Laboratory, Sept. 28, 2020: A research team from four national laboratories, including Fermilab and Argonne, have undertaken work at two Fermilab neutrino experiments — MiniBooNE and NOvA — to construct a model of how neutrinos interact with atomic nuclei. This knowledge is essential to unravel an even bigger mystery: why during their journey through space or matter neutrinos magically morph from one into another of three possible types or flavors. 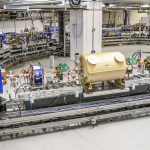 From Crain’s Chicago Business, Aug. 26, 2020: A pair of big-money federal research grants give Chicago a ground-floor opportunity in a field many expect to transform computing. Fermilab and Argonne are among five national laboratories that will get $115 million apiece to study quantum computing.

From WTTW, Sept. 1, 2020: Chicago appears to be at the center of a quantum acceleration, with the Department of Energy announcing that two of five new national quantum research centers will be in the Chicago area – at Fermilab and Argonne. Each will receive $115 million over the next five years to further their research. Watch Superconducting Quantum Materials and Systems Center Director Anna Grassellino in this 6-minute television segment.

From Argonne National Laboratory, Aug. 5, 2020: The U.S. Department of Energy’s Advanced Scientific Computing Research Leadership Computing Challenge has awarded 24 projects a total of 5.74 million node hours at the Argonne Leadership Computing Facility to pursue challenging, high-risk, high-payoff simulations. Fermilab scientists Andreas Kronfeld and Igor Rakhno are among those who have been awarded time on the facility’s Theta supercomputer.

From Photonics, July 27, 2020: The U.S. Department of Energy has unveiled a blueprint strategy for the development of a national quantum internet, reaffirming its commitment to widening the nation’s quantum capabilities by relying on its 17 national laboratories to serve as the backbone of the coming quantum internet and the secure transmission of information.

From HIT Infrastructure, July 30, 2020: The Department of Energy has unveiled a blueprint strategy for national quantum internet within the next decade to usher in an era of more secure communication, with health services slated to be early adopters. Already, scientists from Argonne National Laboratory and the University of Chicago intertwined photons across a 52-mile quantum loop. That network will soon be connected to Fermilab, creating three-node, 80-mile test bed.

Launch to the Future: Quantum Internet

From CTOvision.com, July 27, 2020: The U.S. Department of Energy has unveiled a report that lays out a blueprint strategy for the development of a national quantum internet, bringing the United States to the forefront of the global quantum race and ushering in a new era of communications.