Batavia, Illinois — An international collaboration of scientists at the Department of Energy’s Fermi National Accelerator Laboratory will announce on July 21, 2000, the first direct evidence for the subatomic particle called the tau neutrino, the third kind of neutrino known to particle physicists. They will report four instances of a neutrino interacting with an atomic nucleus to produce a charged particle called a tau lepton, the signature of a tau neutrino.

Although earlier experiments had produced convincing indirect evidence for the particle’s existence, no one had directly observed the tau neutrino, a massless or almost massless particle carrying no electric charge and barely interacting with surrounding matter.

“We finally have direct evidence that the tau neutrino is one of the building blocks of nature and that it reacts with other particles in accordance with our current scientific theory of particle interactions,” said Byron Lundberg, spokesman of the Direct Observation of the Nu Tau (DONUT) experiment, a collaboration of 54 physicists from the United States, Japan, Korea and Greece. “It is one thing to think that there are tau neutrinos out there. But to really look for the rare incidence of a tau neutrino hitting a nucleus and transforming into a tau lepton is a hard experiment to do.”

The tau (rhymes with “now”) neutrino is the third neutrino of the Standard Model of elementary particles, a theoretical description that groups all particles into three generations. First-generation electron neutrinos and their second-generation cousins, muon neutrinos, are easier to produce and detect than tau neutrinos. Experimenters identified them in 1956 and 1962 by recording neutrino interactions creating either electrons or muons. More than 30 years of technological advancement have now allowed physicists to observe the third-generation tau neutrino producing a tau lepton.

“Fermilab has once more shown its capability for research at the frontiers of particle physics,” said Secretary of Energy Bill Richardson. “The Department of Energy continues to make critical contributions to today’s understanding of the fundamental structure of matter, including pioneering experiments with all three neutrinos.” Forty-four years ago, scientists discovered the first neutrino at the Savannah River Plant of the Atomic Energy Commission. In 1962, scientists found the second, the muon neutrino, at Brookhaven National Laboratory.

In 1997, using Fermilab’s Tevatron accelerator, scientists produced an intense neutrino beam, which they expected to contain tau neutrinos. The neutrino beam crossed the three-foot-long DONUT target of iron plates sandwiched with layers of emulsion, which recorded the particle interactions. In the target, one out of one million million tau neutrinos interacted with an iron nucleus and produced a tau lepton, which left its one-millimeter-long tell-tale track in the emulsion. Physicists needed about three years of painstaking work to identify the tracks revealing a tau lepton and its decay, the key to exposing the tau neutrino’s secret existence.

“The tau lepton leaves a track in the layers of emulsion, just as light leaves a mark on photographic film, but in three dimensions,” explained Vittorio Paolone from the University of Pittsburgh, also a spokesman of the collaboration and a senior scientist at one of the six U.S. and six foreign universities involved in the experiment. “The main signature of a tau lepton is a track with a kink, indicating the decay of the tau lepton shortly after its creation.”

“It was the proverbial needle in a haystack,” said Lundberg. The DONUT experiment recorded a total of six million potential interactions. By analyzing signals from various components of the 50-foot-long detector, they winnowed out all but 1000 candidate events. Of these, four events provided evidence for the tau neutrino.

Physicist Leon Lederman, who, along with Jack Steinberger and Melvin Schwartz, received the Nobel Prize in 1988 for the discovery of the second-generation muon neutrino, commented on the DONUT results. “Having participated in the research that established that there are two neutrinos, it would seem to be disconcerting to now learn that there are three. I can hear people complaining: ‘Can’t these guys make up their minds? ‘” Lederman said with a twinkle. “But seriously: The direct confirmation of the tau neutrino is an important and long-awaited result. Important because there is a huge effort underway to study the connections among neutrinos, and long awaited because the tau lepton was discovered 25 years ago, and it is high time the other shoe was dropped.”

Stanford University physicist Martin Perl, winner of the 1995 Nobel Prize for discovering the tau lepton, the first indicator for a third generation of particles, congratulated the DONUT experimenters.

“Finding the tau neutrino is very important and very exciting,” said Perl. “DONUT was not an easy experiment, and now it opens a whole new world. There is the possibility of the tau neutrino interacting somewhat differently from the other neutrinos. We might have a chance of learning more about all other particles.”

After scientists at SLAC discovered the tau lepton, physicists realized that there should be a corresponding neutrino-an hypothesis further supported by a 1982 experiment at Fermilab. In 1989, experimenters at CERN found proof that the tau neutrino is the third and last light neutrino of the Standard Model, but a direct observation was not yet feasible.

The new direct evidence for the tau neutrino is far from closing the chapter on neutrino physics. Scientists are eager to learn whether neutrinos have mass, a result that would put a crack in the Standard Model, leading to major changes in our picture of the evolution of the universe. Experiments to answer these questions are underway in Japan, under construction at Fermilab and planned at CERN. The ability to detect tau neutrinos is an important step toward identifying non-zero neutrino masses.

Physicists will announce the DONUT results at a Fermilab colloquium on July 21 at 4 p.m. Following the discoveries of the bottom and top quark at the laboratory, scientists at Fermilab have now lifted the veil on a third elementary particle.

In August, the DONUT collaboration will present the tau neutrino results at a meeting of the American Physical Society to an audience of particle physicists from around the world. The collaborators, from Fermilab and the universities of Minnesota, Pittsburgh, Kansas State, Tufts, California at Davis and South Carolina; Nagoya, Kobe and Aichi (Japan); Gyeonsang and Kon-kuk (Korea); and Athens (Greece), will submit a scientific publication of the tau neutrino results to a major physics journal in the near future.

Fermilab, 30 miles west of Chicago, is operated by Universities Research Association, Inc., for the U.S. Department of Energy. Photos, further information and additional comments on the tau neutrino announcement can be found at www.fnal.gov/pub/inquiring/physics/neutrino/discovery/index.html. 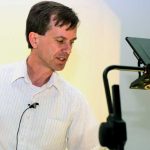 Fermilab physicist Byron Lundberg, spokesman for the DONUT experiment, announces the first direct evidence for the tau neutrino at a colloquium at Fermilab on Friday afternoon, July 21, 2000. 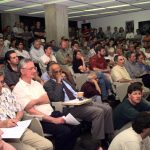 Fermilab physicists packed a lecture hall at the laboratory to hear DONUT spokesman Byron Lundberg announce the first direct evidence for the tau neutrino at a colloquium on Friday afternoon, July 21, 2000. 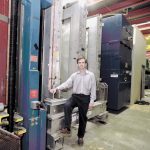 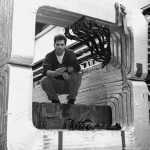 DONUT spokesman Vittorio Paolone, University of Pittsburgh, poses inside the magnet used to eliminate charged particles from the neutrino beam. 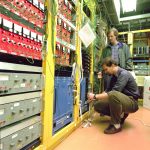 Spokesmen Vittorio Paolone (foreground) and Byron Lundberg in the counting room of the DONUT experiment. 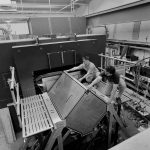 John Trammell and Dave Ciampa, University of Minnesota, working on the target station of the DONUT experiment. 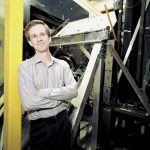 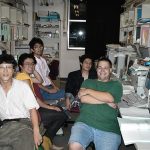 The computer room of the DONUT analysis group at Nagoya University with (from left to right) N. Nonaka, O. Sato, T. Nakano, K. Ito and Turanmeru. 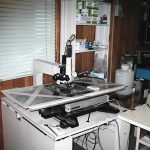 One of the emulsion scanning tables at Nagoya University 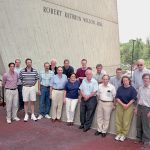 Some of the 54 physicists of the DONUT collaboration in front of Wilson Hall at Fermilab. 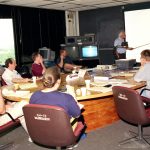 Members of the DONUT collaboration met on July 7, 2000 at Fermilab to discuss their latest tau neutrino results. 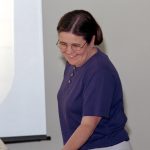 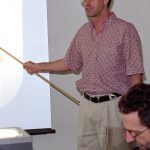 Graduate student Jason Sielaff of the University of Minnesota is one of many students working on DONUT. 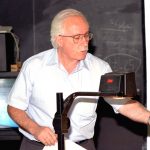 George Tzanakos of the University of Athens, Greece. 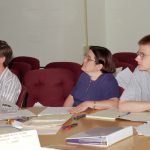 Byron Lundberg, Regina Rameika (both of Fermilab) and Patrick Berghaus (Kansas State University) at a meeting of the DONUT collaboration at Fermilab. 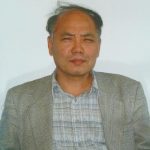 Koyu Niwa of Nagoya University leads the group of Japanese scientist of the DONUT collaboration. 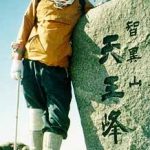 Jin Sop Song of Gyeongsang University is the Korean senior scientist of the DONUT collaboration. 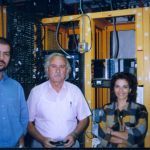 The Greek members of the DONUT collaboration at the University of Athens: George Tzanakos (center) with his graduate students Costas Andreopoulos and Niki Saoulidou. 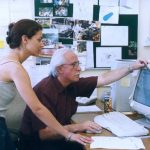 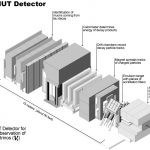 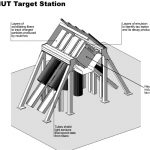 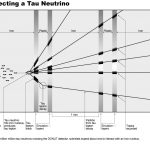 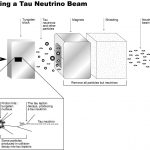 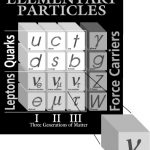 Chart of the Standard Model 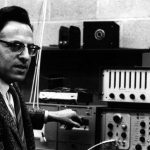 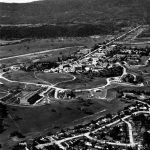 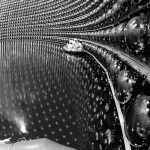 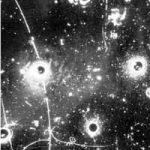 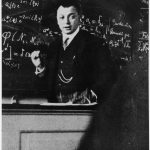 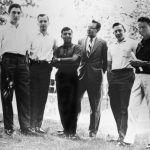