Batavia, Ill.-Scientists at the Department of Energy’s Fermi National Accelerator Laboratory have found a surprising discrepancy between predictions for the behavior of neutrinos and the way the subatomic particles actually behave. Although the difference is tiny, it is the kind of inconsistency that makes the hair stand up on the back of a physicist’s neck, because it could be the first sign of something that profoundly changes our picture of nature.

Experimenters at Fermilab’s NuTeV (Neutrinos at the Tevatron) experiment measured the ratio of two types of particles-neutrinos and muons-emerging from high-energy collisions of neutrinos with target nuclei. The results of generations of particle experiments with other particles have yielded precise predictions for the value of this ratio, which characterizes the interactions of particles with the weak force, one of the four fundamental forces of nature. For other elementary particles, including the quarks and electrons of ordinary matter, the predictions seem to hold true. But, to the NuTeV experimenters’ surprise, when they looked at neutrinos with comparable precision, neutrinos did not appear to fall into line with expectations.

“We looked at a quantity that physicists call ‘sine squared theta W,'” said NuTeV physicist Sam Zeller, a graduate student from Northwestern University. “It tells us the strength of the interaction of neutrinos with the Z boson, one of the carriers of the weak force. The predicted value was 0.2227. The value we found was 0.2277, a difference of 0.0050. It might not sound like much, but the room full of physicists fell silent when we first revealed the result.”

The NuTeV result gets physicists’ attention because it doesn’t quite fit the Standard Model, the very precise theoretical picture that physicists have developed to explain fundamental particles and forces and their interactions. In particle physics, such “misfit” results are often the harbinger of new particles, new forces and new ways of seeing nature. The experimenters reported a three-sigma discrepancy in sin2qW, which translates to a 99.75 percent probability that the neutrinos are not behaving like other particles.

“Our picture of matter has held true for thirty years of experimental results,” said Fermilab Associate Director Michael Shaevitz, a NuTeV cospokesperson. “With the NuTeV result, it’s possible we may have stumbled across a crack in the model. As yet, we don’t know the explanation, but we believe it may foreshadow discoveries just ahead at accelerator laboratories.”

NuTeV collaborator Kevin McFarland, assistant professor of physics at the University of Rochester, emphasized that the NuTeV measurement would not be so striking if the experiment had not achieved an extraordinary level of precision, unprecedented for a neutrino experiment of its kind.

“Because we examined the interactions of millions of neutrinos and antineutrinos, their antimatter counterparts,” McFarland said, “we determined that there is only a one in four hundred chance that our measurement is consistent with the prediction. Unless this is a statistical fluke, it looks as if neutrinos may really behave differently from other fundamental particles. Further, experimenters using the Large Electron Positron at CERN, the European Particle Physics Laboratory, recently measured this same neutrino interaction in a different particle reaction. They saw the same discrepancy we found, although with less precision. The consistency between these two very different measurements is striking.”

The elusive neutrinos carry no electric charge and “feel” only the weak force, which is a hundred times weaker than the electromagnetic force. As a result, neutrinos rarely interact with each other or with other particles, making them extremely hard to detect. Physicists designed the NuTeV experiment in order to observe the interactions of millions of the highest-energy, highest-intensity neutrinos ever produced. Starting with a proton beam from Fermilab’s Tevatron, the world’s highest-energy particle accelerator, experimenters created a beam of neutrinos directed at a giant particle detector. The detector itself was a 700-ton sandwich of alternating slices of steel and detector. As the beam passed from the first to the last slice, one in a billion neutrinos collided with a target nucleus, breaking it apart.

After the collision with a nucleus, the neutrino could either remain a neutrino or turn into a muon, a particle that is a heavier cousin of the electron. When NuTeV experimenters saw a nucleus break up, they knew a neutrino had interacted. If they saw a particle leaving the scene of the collision, they knew it was a muon. If they saw nothing leaving, they knew a neutrino (invisible to the detector’s “eye”) had come and gone. The NuTeV scientists measured the ratio of muons to neutrinos and compared it with the predicted values, which other experiments have verified to a part per thousand accuracy for other particles. A painstaking years-long analysis of the NuTeV data revealed the unexpected discrepancy.

“This wouldn’t be the first time that neutrinos have surprised us,” said Northwestern’s Zeller, noting recent evidence for a small mass in the ghostly particles found by the millions in every gallon of space in the universe. “Their pervasive presence in the world around us means that even very subtle properties of neutrinos have profound implications for the way the universe works.”

Fermilab is operated by Universities Research Association, Inc. under a contract with the U.S. Department of Energy. 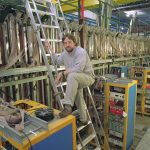 Fermilab physicist and NuTeV cospokesman Bob Bernstein with the NuTeV detector, a 700-ton sandwich of steel, scintillator and drift chambers. 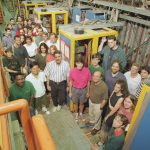 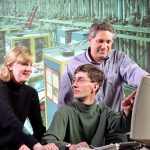 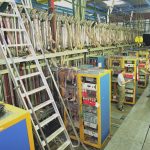 Neutrino detector with electronic readout. The detector uses steel as a target and drift chambers and scintillator counter to capture the details of the neutrino interactions. 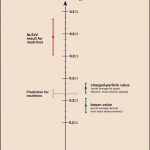 Precise measurements for other particles, including force-carrying bosons, quarks, electrons and muons, led to the predictions for sine-squared-theta-W for neutrinos. NuTeV experimenters, however, found a result that differed significantly from the predicted value. 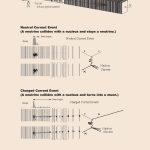 The NuTeV detector was a 700-ton sandwich with over a hundred slices of alternating steel and particle detectors. Even with 700 tons of target material to hit, only one in a billion neutrinos in the NuTeV beam interacted as it went fromt the first to the last slice.