Batavia, Ill. – Early yesterday morning (Jan. 22), scientists of the U.S. CMS collaboration joined colleagues around the world to celebrate the lowering of the final piece of the Compact Muon Solenoid detector into the underground collision hall at CERN in Geneva, Switzerland. The near completion of the CMS detector marks a pivotal moment for the international experiment, in preparation for the start-up of the Large Hadron Collider this summer.

CMS is the first experiment of its kind to be constructed above ground and then lowered, piece by piece, into a cavern 300 feet below. This final piece is a large disk, nearly 45 feet in diameter, with an asymmetrical cap on one face that fits into the central barrel of the experiment. The whole assembly weighs approximately 1,430 tons. It includes fragile detectors that will help identify and measure the energy of particles created in LHC collisions. After eight years of work in the surface hall, the lowering of this final piece moves CMS into its final commissioning stage.

“We have been building the CMS detector for nearly a decade, and now we’re 99.8 percent done,” said Fermilab physicist Dan Green, construction project manager for US CMS and CMS collaboration board chair-elect. “The first collisions are just around the corner.”

For this last large piece, scientists at the University of Wisconsin-Madison designed the large iron disks that help guide the magnetic field created by the detector’s powerful solenoid magnet. “From the design to the construction, we were involved all the way,” said physicist Dick Loveless from the University of Wisconsin-Madison, who watched as the huge gantry crane lowered the disk. “It was phenomenal to see this last piece go down. Everything went down without excitement, which is exactly what we want.” Fermilab and U.S. universities designed and built the cathode strip chambers that are bolted onto the disks. These chambers accurately track muons, the heavier versions of electrons that indicate interesting collisions. U.S. funding also contributed to the plastic scintillating layers and all the electronics in the hadron calorimeter, part of which is the “nose” of the disk that absorbs and measures energies of all particles flying through the detector.

From shedding light on dark matter to searching for extra dimensions of space, experiments at the LHC promise to unlock some of the deepest mysteries of the universe. “This is a very exciting time for physics,” said CMS spokesman Tejinder Virdee. “The LHC is poised to take us to a new level of understanding of our universe.”

Data taking will begin for the CMS experiment in the summer of 2008. 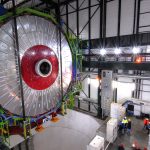 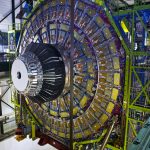 CMS scientists position the final piece of the detector above the shaft and begin to lower it into the underground collision hall, 300 feet below. Image courtesy of CERN 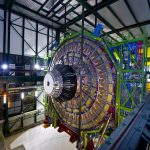 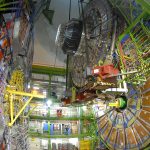 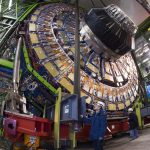 Touch down. Now that the final piece is underground, final commissioning will begin on the CMS detector. Image courtesy of CERN

Video is available at:
http://cmsinfo.cern.ch/outreach/cmseye/yemin1_lowering.htm

The United States contributions to the CMS experiment and the Large Hadron Collider are funded by the Department of Energy’s Office of Science and the National Science Foundation.

Fermi National Accelerator Laboratory is the host laboratory for the US CMS Collaboration. Fermilab is a Department of Energy National Laboratory operated under a contract with DOE by the Fermi Research Alliance.