Members of the DES collaboration will give an overview of the survey at 10 a.m. Tuesday, Jan. 11, at a Special Session of the American Astronomical Society meeting in Seattle. Dark Energy Survey Director Josh Frieman will highlight the project and how it will advance our understanding of dark energy at a AAS press conference at 9 a.m. PST on Thursday, Jan. 13.

The international DES collaboration of physicists and astronomers has built the 570-megapixel Dark Energy Camera that will be mounted later this year on the 4-meter (158-inch) telescope at the National Science Foundation’s Cerro Tololo Inter-American Observatory in Chile, operated by the National Optical Astronomy Observatory.

Improved photo-sensors based on charged-coupled devices (CCDs) designed at Lawrence Berkeley National Laboratory will provide the camera with enhanced sensitivity to carry out the largest galaxy survey of its kind.

“The Dark Energy Survey data will be an unprecedented legacy for astronomers and will have unique scientific reach until the Large Synoptic Survey Telescope comes along at the end of the decade,” said DES Deputy Director Rich Kron of the University of Chicago.

The telescope has been improved in preparation for installing the camera this year.

“The Dark Energy Camera will be a remarkable facility for the astronomical community in addition to its use by the DES collaboration,” said CTIO astronomer Alistair Walker.

View a short time-lapse video of assembly at Fermilab of a replica front-end of the Blanco telescope in Chile on which the Dark Energy Camera will be mounted. Video: Fermilab
During five years of operation, DES will create deep, color images of one-eighth of the sky, or 5,000-square degrees, to measure 300 million galaxies, 100,000 galaxy clusters, and 4,000 new supernovae. It will construct the largest map of the cosmic web of large-scale structure traced by galaxies and by dark matter.

“The DES combination of survey area and depth will far surpass what has come before,” Frieman said.

DES will take advantage of the excellent atmospheric conditions in the Chilean Andes to deliver images with the sharpest resolution yet for such a wide-field survey. This will enable the team to probe dark energy using a technique called weak gravitational lensing, said Bhuvnesh Jain, a DES collaborator at the University of Pennsylvania.

DES will combine weak lensing with three other probes of dark energy – galaxy clusters, supernovae, and large-scale structure – the first time this will be possible in a single experiment. During the Tuesday session on DES, these measurements will be described by scientists Chris Miller of the University of Michigan, Masao Sako of the University of Pennsylvania, and Enrique Gaztanaga from the Catalan Institute of Space Studies in Barcelona.

Over the course of the survey, each part of the sky will be viewed multiple times through five different filters, creating a very large amount of data. The camera will capture more than 300 images a night, resulting in about 200 gigabytes of compressed, raw data, or roughly a million gigabytes of processed data by the end of the survey, said Joe Mohr of Ludwig Maximilians University in Munich. The data will be processed at the National Center for Supercomputer Applications in Urbana, Illinois, and delivered to collaboration scientists and to the public.

DES’s survey area is selected to overlap with other sky surveys that can provide additional data about the galaxies and clusters it views. These surveys include the South Pole Telescope, which sees galaxy clusters as cold spots in the cosmic microwave background radiation, and the European Southern Observatory’s Vista Hemisphere Survey, which will observe the same sky region in infrared light.

DES is supported by funding from the U.S. Department of Energy, the National Science Foundation, funding agencies in the United Kingdom, Spain, Brazil, and Germany, and the participating DES institutions.

Astrophysicists assembled and are testing the Dark Energy Camera at Fermilab using a new state-of-the-art facility specially built for this purpose. The first parts have been shipped to Chile and the rest will be shipped this year as testing is completed. “First light” for the camera on the telescope is scheduled for late 2011.

The Dark Energy Survey will use the camera to understand why the expansion of the universe is accelerating and to probe the dark energy thought to be causing this cosmic speed-up. Dark energy, a mysterious source of anti-gravity that has been found to dominate the energy density of the universe, will determine the fate of the universe. If the expansion continues to speed up, in 100 billion years the observable universe could be nearly empty of galaxies.

The Dark Energy Camera will peer into space to trace the history of the universe roughly three-quarters of the way back to the time of the Big Bang, capturing images of 300 million distant galaxies about 10 million times fainter than the dimmest star you can see from Earth with the naked eye.

The Dark Energy Camera will have the largest optical survey power in the world. Its 2.2 degree field of view is so large that a single image will record data from an area of the sky 20 times the size of the moon as seen from earth. This wide field of view requires that DECam use a system of five lenses, each one uniquely shaped to correct a variety of optical aberrations, with the biggest of these lenses being almost 1 meter in diameter.

More information about the Dark Energy Survey, including the list of participating institutions, is available at the project website: http://www.darkenergysurvey.org.

Fermilab is a Department of Energy national laboratory operated under contract by the Fermi Research Alliance, LLC. The DOE Office of Science is the single largest supporter of basic research in the physical sciences in United States. 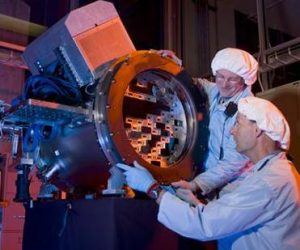 Scientists build a prototype of the Dark Energy Camera, which will survey about one-tenth of the sky to measure 300 million galaxies and discover thousands of supernovae. Credit: Fermilab. 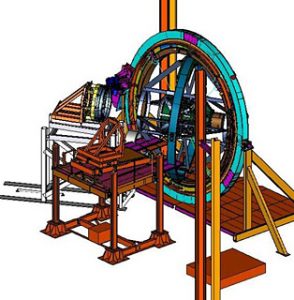 An artist’s rendering of DECam inside the frame that will mount the camera to the Blanco telescope. DECam will have the largest optical survey power in the world. Credit: Fermilab/DES collaboration. 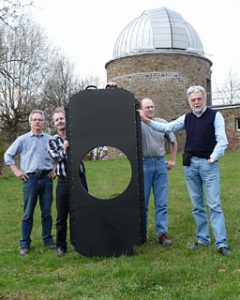 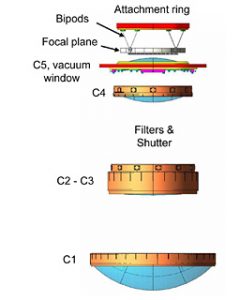 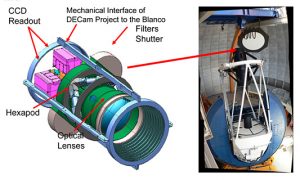 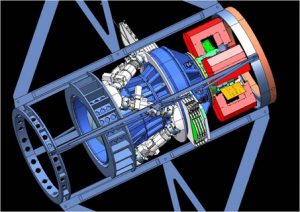 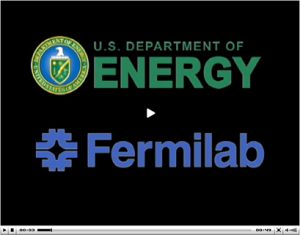 View a short time-lapse video of assembly at Fermilab of a replica front-end of the Blanco telescope in Chile on which the Dark Energy Camera will be mounted. Credit: Fermilab. 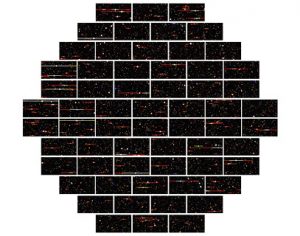 A simulation of a photo of galaxy clusters taken by DECam. A single camera image captures an area 20 times the size of the moon as seen from Earth. Credit: DES.

The Blanco telescope in Chile as seen at nighttime. Credit: T. Abbott and NOAO/AURA/NSF. 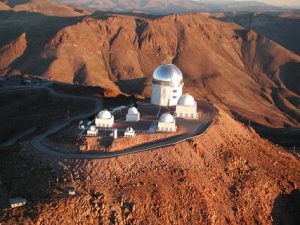 The Blanco telescope in Chile as seen from the air. Credit: NOAO/AURA/NSF. 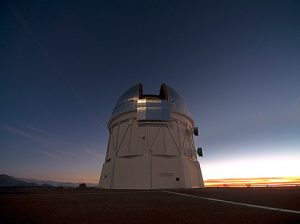 The Blanco telescope in Chile. Credit: T. Abbott and NOAO/AURA/NSF. 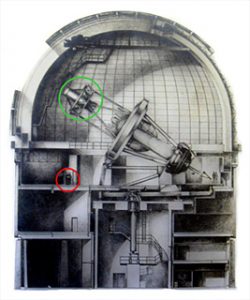 The 4 meter Blanco telescope. The green circle marks the location of the prime focus cage where DECam will be mounted. Credit: CTIO/AURA/NSF. 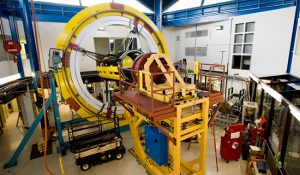 To test the design of DECam, collaboration member are building at Fermilab a two-story replica of the hardware that will mount the camera to the Blanco telescope in Chile and rotate it to take pictures of the sky. Credit: Fermilab. 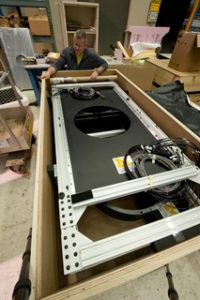 DECam will have the world’s largest camera filter seen here being unpacked at Fermilab for assembly onto the camera. Credit: Fermilab.