The NOvA experiment, best known for its measurements of neutrino oscillations using particle beams from Fermilab accelerators, has been turning its eyes to the skies, examining phenomena ranging from supernovae to magnetic monopoles. Thanks in large part to modern computing capabilities, researchers can collect and analyze data for these topics simultaneously, as well as for the primary neutrino program at the U.S. Department of Energy’s Fermilab, where it is based.

The most dramatic astrophysical phenomena that NOvA studies are supernovae. When a massive star collapses, it releases 99% of its energy in a burst of neutrinos. The other 1% becomes a visible supernova, bright enough to outshine an entire galaxy. While the neutrinos carry vastly more energy than do the particles of light, called photons, the elusive neutrinos are much more difficult to observe. Hundreds of visible-light supernovae are discovered each year, but only one since the dawn of the age of neutrino detectors has been near enough to have been seen through its neutrino signature: SN 1987A, in a satellite galaxy of our Milky Way. 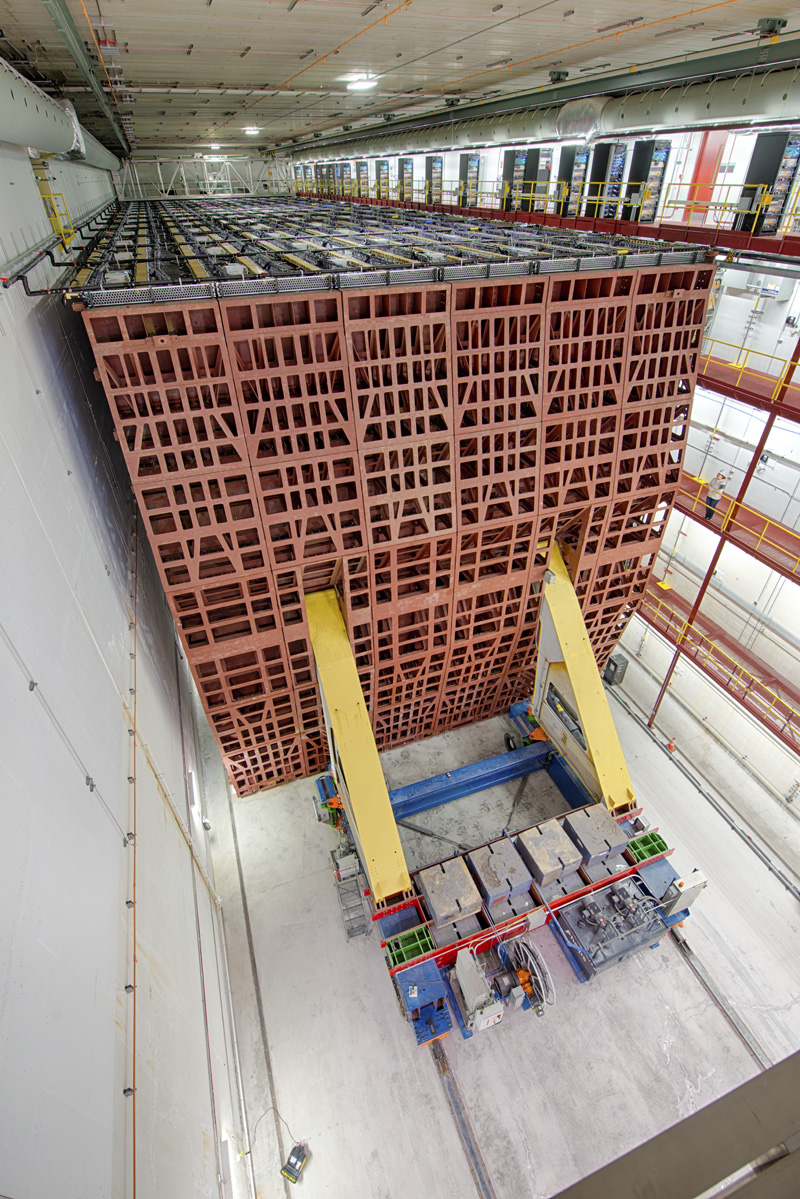 The NOvA far detector — one of two particle detectors used in the NOvA experiment — is located in northern Minnesota. If a supernova were born in our galaxy, the 14,000-ton instrument would see thousands of neutrinos in a few seconds. Photo: Reidar Hahn, Fermilab

Both of NOvA’s particle detectors — the near detector at Fermilab and the far detector in northern Minnesota — are capable of detecting neutrinos generated by supernovae. Each supernova-neutrino signature would appear much smaller than that from an accelerator-generated neutrino beam, but it would still be observable. If a supernova were to be born in our galaxy, NOvA’s 14,000-ton far detector would see thousands of these neutrinos in a few-second burst, and the 300-ton near detector dozens.

In a new paper to be published in the Journal of Cosmology and Astroparticle Physics, the NOvA collaboration describes the system that will be used to trigger on such a burst. Because of the rarity of nearby supernovae and the high value of the neutrino data, NOvA uses several redundant systems to ensure the collection of supernova data. Besides running a continuous real-time search for a burst of neutrinos in its own data, NOvA subscribes to the Supernova Early Warning System, or SNEWS, a network of neutrino experiments that alert each other when any two of them see supernova-like activity at the same time. NOvA also subscribes to alerts sent by the LIGO/Virgo collaboration when a gravitational-wave event is observed, treating each one as a potential source of interesting data. Since gravitational-wave astronomy is brand new, there is great potential for surprises.

The simplest model explaining the majority of gravitational-wave events — black holes merging in vacuum — does not predict particle emissions. But if the black holes merged within a gaseous medium, particles would be accelerated, possibly leading to an observable signal. Other more exotic alternative models explaining some gravitational-wave events could also yield a burst of particles visible to NOvA.

Another scenario that could trigger NOvA is a case of mistaken identity, one in which a supernova is misidentified as a black hole gravitational-wave event. The collaboration performed a search for any emissions visible to NOvA, ranging from supernova-like neutrinos up to high-energy particle showers large enough to light up the entire far detector. As yet, using two dozen gravitational wave events reported through mid-2019, NOvA has found no indication of a signal. This result appears in Physical Review D. NOvA will continue to examine events as they are reported. With the capabilities of gravitational-wave detectors set to rapidly improve over the next few years, there will be many more opportunities to participate in new discoveries.

Closer to home, the NOvA’s underground near detector has been used to examine the seasonal variation of cosmic-ray muons underground. Cosmic rays are particles from outer space that constantly rain down from the sky. They collide with particles in the upper atmosphere, producing muons. The number of muons is affected by atmospheric conditions, and the total number of muons reaching underground detectors is higher in the summer. Summer’s less dense atmosphere favors the production of muons, whereas the denser winter atmosphere tends to degrade the energy of the muons’ parent particles. NOvA is the second experiment, after its predecessor MINOS, to observe that this seasonal correlation is flipped when pairs of muons arriving simultaneously, instead of lone muons, are counted. These are more common in the winter for reasons not well understood. 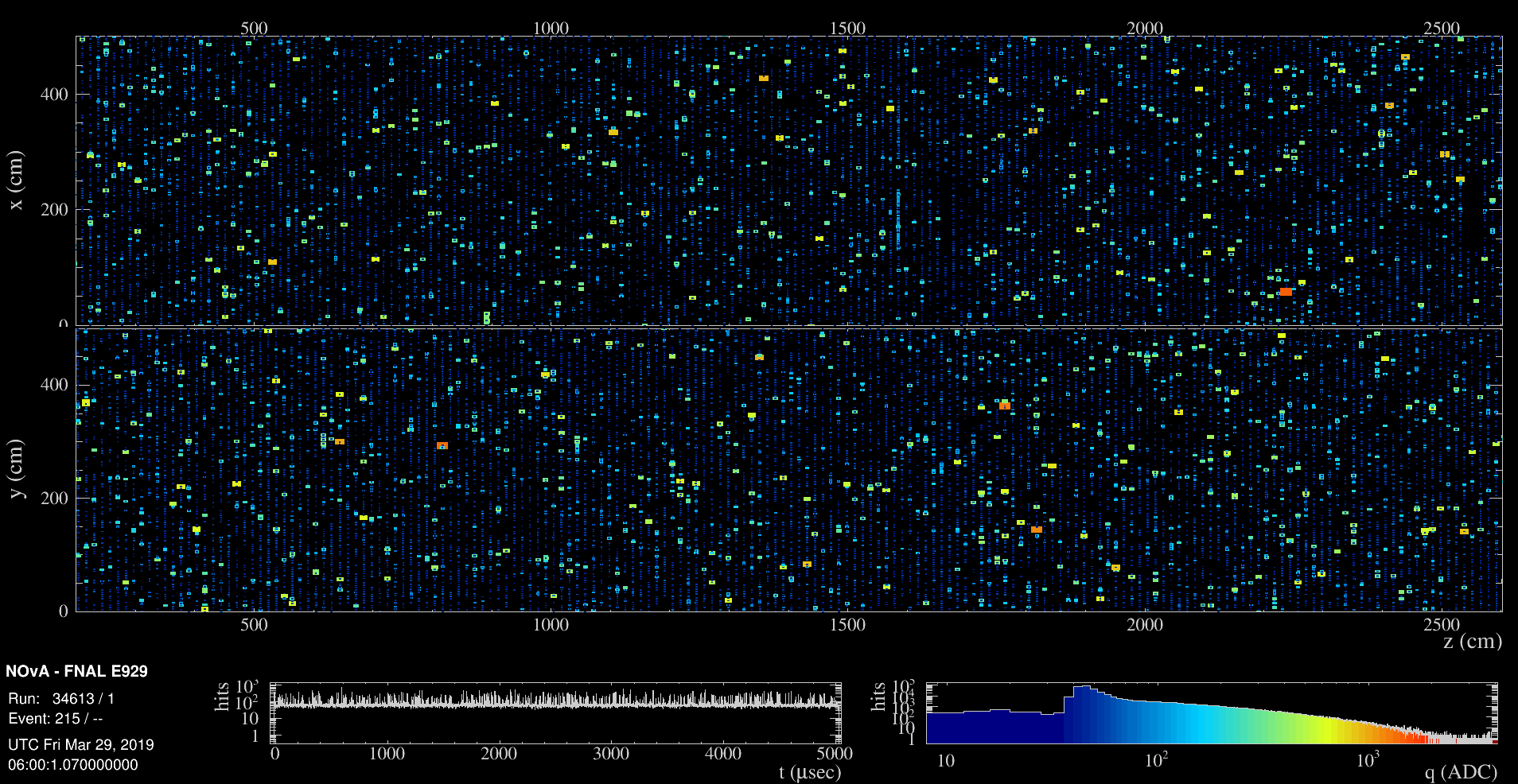 If Betelgeuse went supernova, data in the NOvA far detector would look similar to what is shown in this simulated event display. The larger yellow and orange squares show the simulated response to neutrinos, while the small blue squares are noise. Image: NOvA collaboration

NOvA also uses its large far detector to look for other exotic cosmic phenomena. In a new paper on the arXiv, the collaboration reports on a search for magnetic monopoles. These hypothetical particles carry a single magnetic charge — either a north or a south pole, but not both. Never observed, the existence of monopoles would help tie together fundamental theories in physics, as well as bring a satisfying symmetry to Maxwell’s equations describing electromagnetism. Magnetic monopoles may be a rare component of cosmic rays, and the NOvA far detector is a very capable cosmic-ray detector, able to observe detailed particle tracks. Unlike most previous neutrino detectors and many previous monopole detectors, it is not underground. This means that if monopoles turn out to be relatively slow and light particles, they would reach NOvA, unlike detectors used in previous searches. Using a small set of early data, NOvA researchers searched for monopoles in a mass range never before searched. They saw none, ruling out a large flux of lightweight monopoles. They will examine further data to tighten these limits or, just maybe, to discover the elusive particle.

Matthew Strait is a University of Minnesota physicist on the NOvA neutrino experiment.