The construction of the Mu2e experiment at the Department of Energy’s Fermilab has reached an important milestone. A crucial section of magnets for the experiment, including components from Italy, Japan and the United States, has passed the rigorous testing necessary to ensure that each individual magnet meets the performance required for the experiment.

Those magnets, part of a section called the transport solenoid, will be pieced together to form a novel part of the Mu2e project. The Mu2e project has reached 80% completion overall, according to Mu2e Project Manager Ron Ray.

When operational, the Mu2e experiment will reach 10,000 times the sensitivity of previous experiments looking for the direct conversion of a muon into an electron to test one of the fundamental symmetries in particle physics. 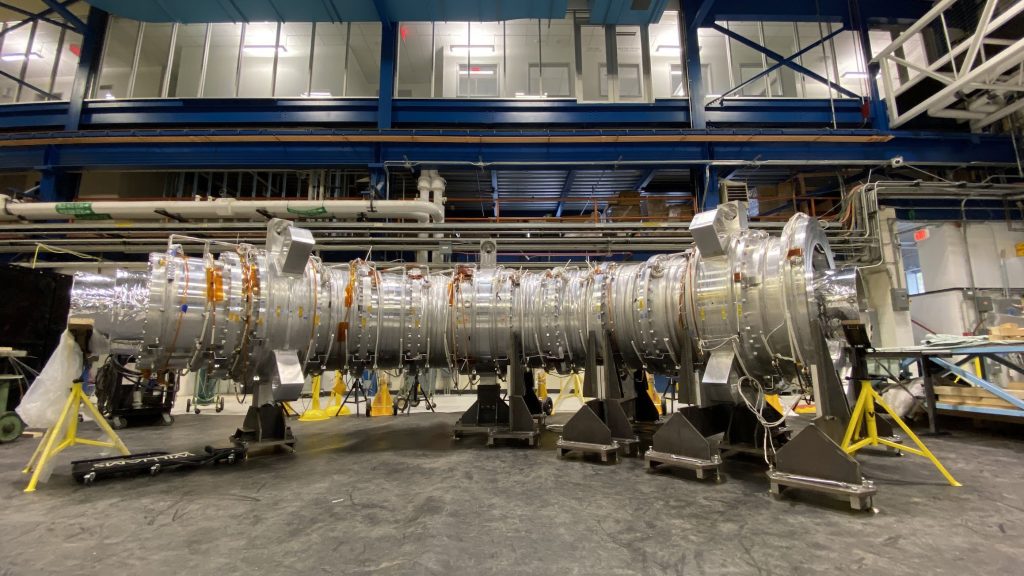 Recently, the Mu2e experiment received and tested the seven superconducting units, shown here, that form the first portion of the transport solenoid. Rigorous testing of the individual units, which were manufactured in industry, ensures they meet the performance required for the experiment. Photo: Vito Lombardo, Fermilab

In the latter half of the 20th century, scientists developed what has become known as the Standard Model of physics. The model relates three of the four fundamental forces – the electromagnetic, the weak and the strong force – to each other. It also classifies all known elementary particles. 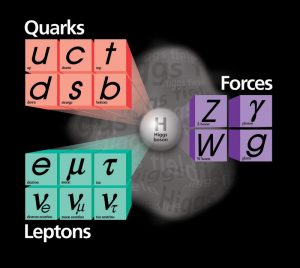 In the Standard Model of particle physics, the muon is in a family of particles called leptons (upper row of the green grid on lower left). Each lepton has a partner particle called a neutrino (bottom row of green grid). Unlike their partners, neutrinos lack electric charge. Scientists have observed neutrinos morphing between their three types, and they have reason to believe that the charged leptons might do the same. Image: Fermilab

But from the beginning, the Standard Model has left certain phenomena unexplained. It doesn’t include the universe’s fourth force, gravity, nor does it address the accelerating expansion of the universe due to dark energy or the existence of dark matter.

So where do muons come in?

In the Standard Model, the muon, along with the electron and tau, are in a family of particles called leptons. Each lepton has a partner particle called a neutrino: the muon neutrino, electron neutrino and tau neutrino. Unlike their partners, neutrinos lack electric charge. Scientists have observed neutrinos morphing between their three types, and they have reason to believe that the charged leptons might do the same. All they need is the right kind of experiment to find out.

The right kind of experiment

That’s where Mu2e comes in.

The experiment is about one-third the length of a football field and will be 10,000 times more precise when it comes to looking for this muon-to-electron conversion than a similar, previous experiment called SINDRUM II. One of the key differences from previous experiments is Mu2e’s system of three superconducting magnet systems: the production solenoid, the transport solenoid and the detector solenoid.

The production solenoid is where the muons are created. A beam of protons hits a target, and the interaction eventually produces muons. With the help of magnets, these muons then spiral down the S-shaped transport solenoid.

The transport solenoid, a critical part of the experimental setup, is divided into two halves. Muons travel down the first half of the curvy corridor, where they are separated by charge. At the solenoid’s midway point, they encounter a special device that permits only negatively charged muons to pass through to the second curved section. The negative muons then exit the transport solenoid and enter the next big magnet, the detector solenoid. There, they stop in a second target.

It’s at this point that the magic happens — the magic of quantum mechanics.

The S-shaped Mu2e transport solenoid is divided into two halves. Muons travel down the first half of the curvy corridor, where they are separated by charge. At the solenoid’s midway point, they encounter a special device that permits only negatively charged muons to pass through to the second curved section. The negative muons then exit the transport solenoid and enter the next big magnet, the detector solenoid (the larger cylinder on the right). There, they stop in a second target. Image: Mu2e

When a negative muon hits a target, only one of two things can happen according to the Standard Model: Either the muon is captured by the nucleus, changing a proton into a neutron and leaving behind a neutrino, or the muon decays, emitting an electron and two neutrinos.

But Mu2e is looking for a third option: The transformation of a muon into only an electron, unaccompanied by the usual neutrino partners. The observation of this process would break the Standard Model wide open, demonstrating that one charged lepton can convert directly into another — a theorized process no one has ever witnessed.

“What we do at Fermilab is pure research, and we’re trying to enrich the human experience by helping people understand the universe and the world we live in,” Ray said. “And ultimately what this is all about is trying to complete the picture of the Standard Model by filling in some holes that we know exist.”

Construction of the transport solenoid

Making that all happen is even more difficult than it sounds, and the transport solenoid is an important part of the design of the experiment, enabling it to be sensitive enough to observe this rare phenomenon, if it exists. The transport solenoid was first proposed decades ago to address the limitations of previous muon-to-electron conversion experiments. Fermilab is the first to fully bring this novel idea to fruition.

But first all the parts need to come together.

Recently, Mu2e received and tested the seven superconducting units that form the first portion of the transport solenoid. Rigorous testing of the individual units, which were manufactured in industry, ensures they meet the performance required for the experiment.

“For this project, we are collaborating with industries scattered all over the world,” said Vito Lombardo, Mu2e manager for the transport solenoids. “The superconducting cables, the building blocks of these magnets, came from Japan, the superconducting units that form the S-shaped magnets are being manufactured in Italy and tested at Fermilab, while the cryostats and thermal shields, the devices that help keeping the magnets cold, are coming from the United States.” 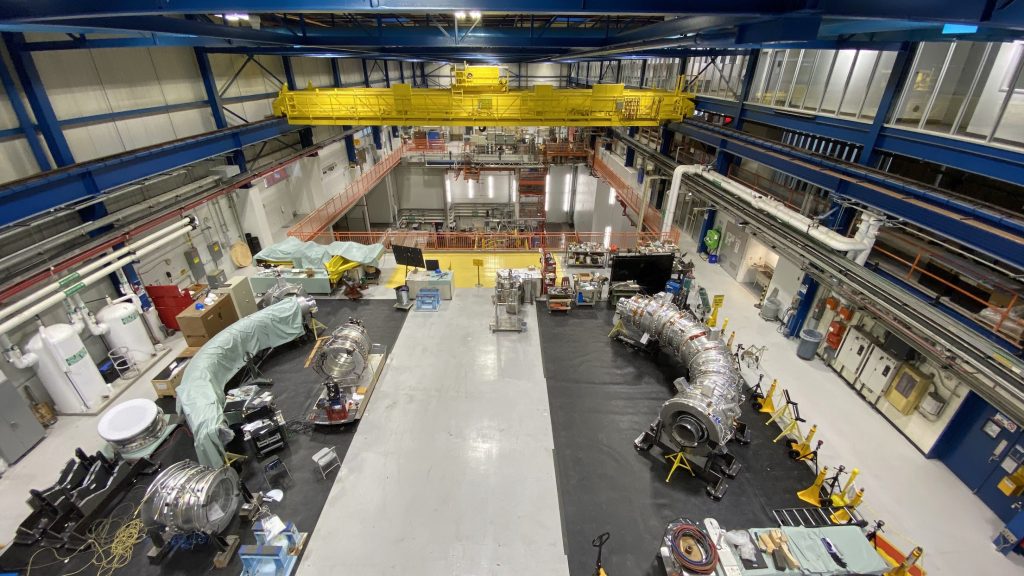 Fermilab is coordinating this global partnership.

If the planning required for the experiment wasn’t complicated enough, the S-shape of the solenoid makes it more so: Each magnet unit is unique. This means that the magnets not only have to be assembled in a specific order but that the experiment cannot rely on spares.

“They’re a very funny shape,” explained Karie Badgley, one of the scientists working on Mu2e. “You can’t just order them as you might with other magnets, especially with the tight tolerances we require.”

The rigorous testing that Fermilab puts each of these magnets through takes about four months.

“It’s been a lot of big, important steps,” Badgley said. “That’s why it’s so exciting that this first half is almost done. We can finally start to put it together and see the whole magnet-aspect of the upstream section come together.”

With the seven magnets making up the first half of the transport solenoid accepted, the team is already putting the section together. Meanwhile, testing on the magnets for the second section kicks off.

Construction of Mu2e is expected to finish in 2023, and the experiment will be ready to start taking physics data shortly after.

The Mu2e experiment at Fermilab is supported by the Department of Energy Office of Science.