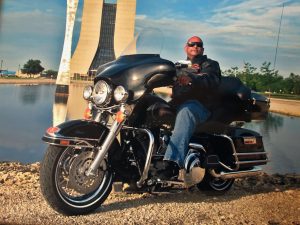 What is your role at Fermilab?

I’m currently a supervisor specializing in neutrino operations for the Proton Assembly Building. But when I first started at Fermilab, I was a technician for the 15-foot bubble chamber. I’ve also worked on segmented wire ionization chambers for the proton beam, the commissioning of the DZero detector, the installation of one of the lab’s beamlines, called NuMI, and several generations of liquid-argon cryostats. And when the Short-Baseline Neutrino Program began, I contributed to the vacuum and piping systems.

You’ve really done a bit of everything! Did you have much experience when you first came to the lab?

No, I was studying to be an auto mechanic in Chicago when I applied here. I came to Fermilab to visit my brother-in-law and ran into some of the interviewers trying to fill positions. They gave me an application to fill out, and I ended up being hired on the same day.

I was sent to Oak Ridge, Tennessee, for a six-month training, but everything since then I’ve picked up on the job. I try to learn something new every day, because I like to learn. I like to discover new things.

What do you like to do in your spare time?

I like working with my hands. Even though I never became an auto mechanic, I’ve owned more than 15 vehicles in my life and have serviced all of them by myself. My two favorite cars have been my 1972 Buick Riviera, which I bought brand new, and the one I have now, a 2013 Chevy Camaro ragtop. I like riding motorcycles, too — I’ve owned Harleys, Yamahas and Hondas.

Traveling is another hobby of mine. My wife Carol worked over in the lab’s accounting department, and we retired from Fermilab together in 2007 to see the world. We visited Hawaii and the Bahamas before I came back from retirement in 2009.

What made you decide to come back to Fermilab?

It’s an enjoyment. Fermilab has been such a fun experience, and when you’re having fun, it doesn’t feel like work. That’s why I’m here after so many years. In fact, I just received a letter in the mail celebrating my second 10-year anniversary as a lab employee!

I’m proud of the things I’ve done around the lab. I work very hard, and I try to pass on as much knowledge as possible with all of the students and technicians I come into contact with. I don’t want to take anything with me; I want to plant as many seeds as I can. That’s my philosophy.

***
Fermilab neutrino research is supported by the Department of Energy Office of Science.