There is a first time for everything. Sometimes that thing is a highly complex machine designed to accelerate an 800-million-electronvolt proton beam to enable decades’ worth of cutting-edge experiments at the United States’ foremost particle physics laboratory.

In January, scientists and engineers at the Department of Energy’s Fermilab successfully completed phase-one testing on a prototype of the first superconducting cryomodule to be fully designed, assembled and tested at Fermilab for the PIP-II accelerator.

“It isn’t often that we have the privilege and opportunity of going through the entire life cycle of such complex structures, from design to testing,” said Donato Passarelli, the Fermilab engineer leading the technical coordination effort for the cryomodule. 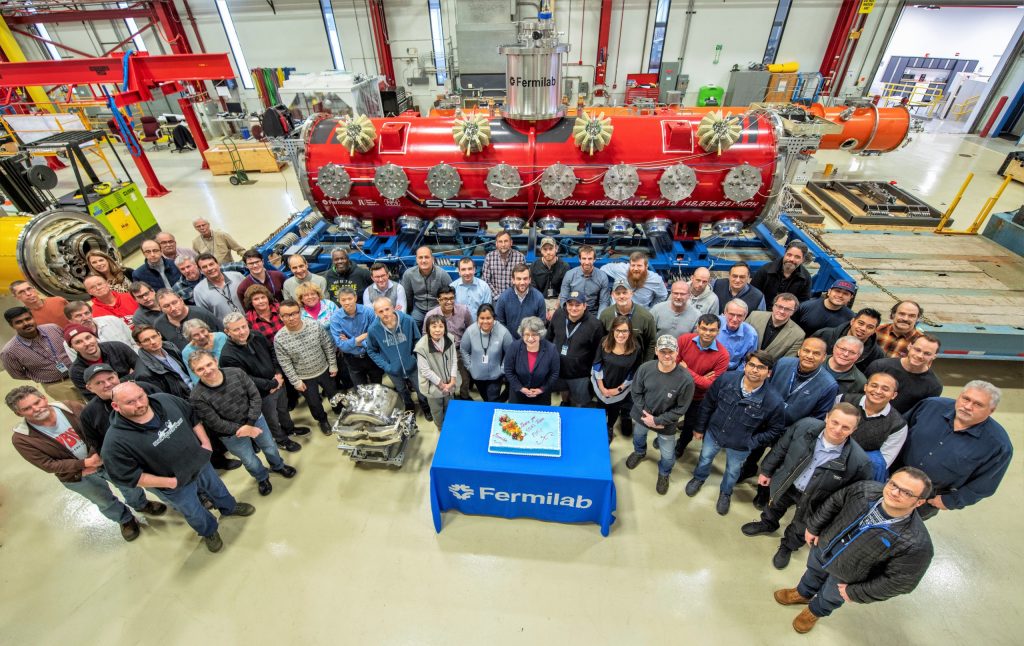 Building something as complex as a superconducting cryomodule takes the efforts of an entire team of scientists, engineers and technicians. This picture was taken in January 2020 in Fermilab’s Industrial Center Building at the end of the SSR1 cryomodule assembly. Photo: Lynn Johnson, Fermilab

The Proton Improvement Plan-II, or PIP-II for short, is a highly anticipated upgrade to Fermilab’s accelerator complex. The PIP-II accelerator will replace Fermilab’s existing linear accelerator to enable the necessary power and versatility for the Fermilab-hosted international Deep Underground Neutrino Experiment and other next-generation experiments.

Cryomodules are the major building blocks of a superconducting linear particle accelerator. Each cryomodule houses a “string” of superconducting cavities, which impart energy to the particle beam through an electromagnetic field, as well as magnets that keep the beam focused. Every component is carefully designed to boost the beam as efficiently as possible. 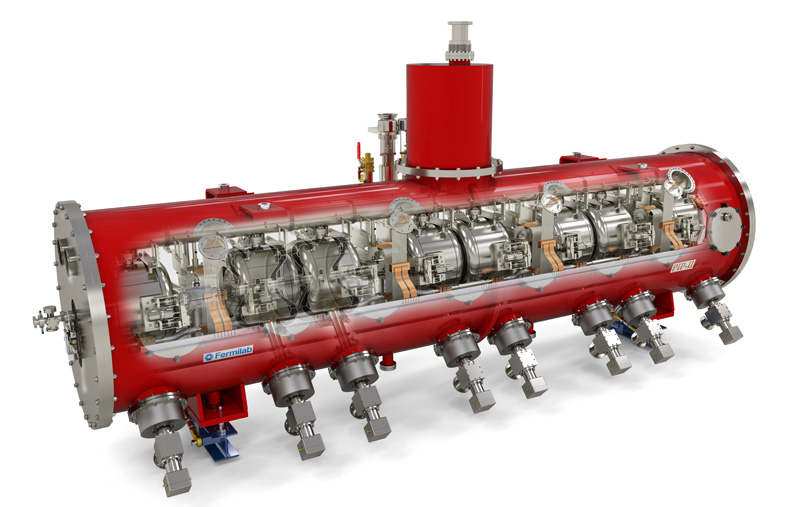 The 215-meter-long PIP-II accelerator will use 23 cryomodules of five different accelerating structure types, connected end-to-end. When the beam has passed through all of them, the particles will be traveling at 84% the speed of light — over 560 million miles per hour.

The recently completed cryomodule from Fermilab houses a cavity type called SSR1, short for single-spoke resonator, type 1. Positioned as the second cryomodule in the accelerator beamline, the SSR1 cryomodule is designed to efficiently accelerate particles traveling at about 20% of the speed of light. Each SSR1 cryomodule will contain eight superconducting cavities and four focusing magnets.

PIP-II, which is supported by the DOE Office of Science, is the first U.S. accelerator project that will have significant contributions, including some of PIP-II’s cryomodules, from international partners. Research institutions in the U.S., France, India, Italy, Poland and the United Kingdom are all developing different parts of the accelerator. Collaborators at India’s Bhabha Atomic Research Center contributed one of the superconducting cavities for the SSR1 prototype.

The challenge is the opportunity

“Of course, it’s not the first cryomodule built at Fermilab,” said Fermilab engineer Vincent Roger, who leads the engineering design of PIP-II cryomodules, “but it was the first time at Fermilab to fully design and build a cryomodule from scratch.”

SSR1 was the first single-spoke resonator cryomodule built in the United States and only the second in the world, so the Fermilab team often found itself in somewhat uncharted territory. It was challenging, but also a big opportunity to innovate. 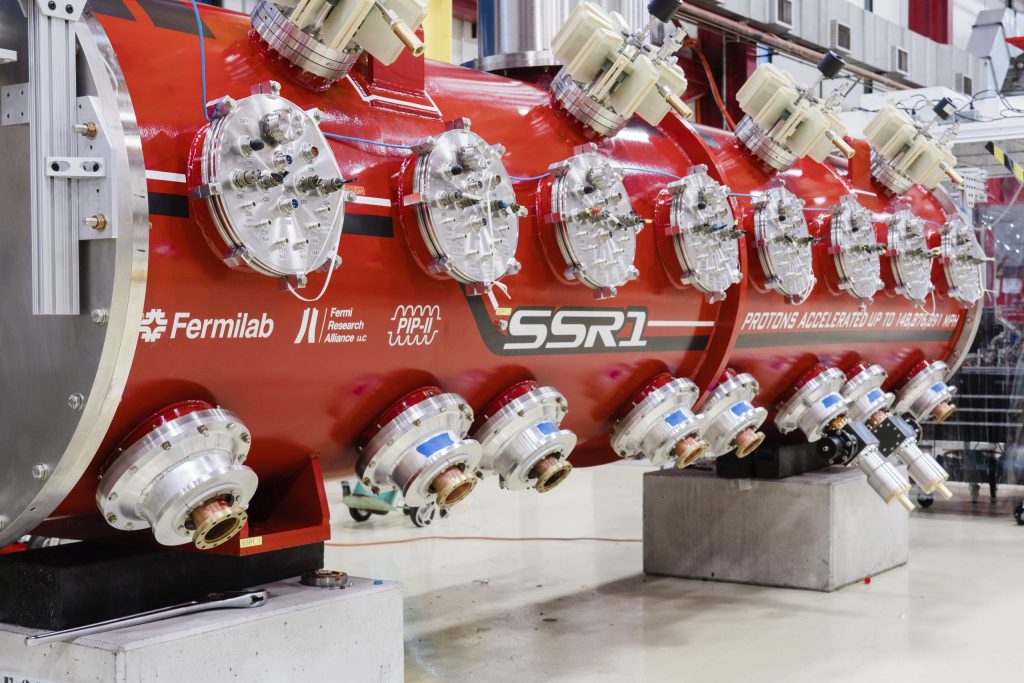 Cryomodules of five different types, one of which is the SSR1 pictured here, boost the energy of the beam. Photo: Tom Nicol, Fermilab

“When I first started on this project, the facility to perform the assembly was brand-new, and we were faced with having to design the techniques almost from scratch,” said Mattia Parise, the Fermilab engineer heading up string assembly for the SSR1 cryomodule. His team had to creatively adapt existing knowledge to a new scheme to put the cavities and magnets together.

When they tested their prototype in late 2020, scientists and engineers rigorously checked that the cryomodule components maintained their structural integrity and electromagnetic performance. In the test, they cooled the module to minus 456 degrees Fahrenheit, powered up the cavities and magnets, and finally accelerated a beam through the cryomodule.

The prototype SSR1 cryomodule successfully met all of the PIP-II project specifications, and the team is now analyzing the test data and refining their analytical models to better predict the cryomodules’ performance in the future.

“If we want to be successful in developing superconducting accelerator technology for PIP-II, we need to continually check and refine the details,” Passarelli said.

Beaming into the future

The prototype cryomodule incorporates several other innovative features besides the cavity design: for example, strongback technology, in which the cavities are connected to a common support frame rather than each other. The strongback frame is at room temperature, so that the cavities and other internal components contract together and stay aligned while they are cooled to near absolute zero.

Computer vision techniques monitor the alignment with hair’s-breadth accuracy, using cameras focused on reflective glass balls attached to each cavity and magnet. The computer monitors the cameras to measure if and how components move and ensure that the internal parts stay in alignment. This type of computer monitoring can also enable more automation in the assembly process.

These features will be carried forward into the next sections of the accelerator, so the team is effectively validating aspects of multiple designs at once with this prototype. The biggest difference between the different superconducting cryomodules is the type of cavities they house. The cavity shapes in each successive cryomodule change as the beam is propelled to higher and higher energies, but the layout of the elements surrounding them will be standardized as much as possible.

“Our main ideas will carry over to the other types of cryomodules designed at Fermilab because our test results show that the concepts work,” Parise said. “We know that we did a good job, and we have more knowledge now about why the systems behave like they do.”

The success of this prototype is thus not only a milestone for PIP-II but a glimpse of things to come for Fermilab. It also reinforces Fermilab’s position as a leader in the global superconducting accelerator community and a valuable partner for future projects.

“It’s important to us as a team because we successfully overcame many technical and scientific challenges,” Passarelli said. “And it’s important for the lab because it brings together knowledge from generations of Fermilab scientists, engineers and technicians to validate a concept that will be adapted for other PIP-II cryomodules.”