Massive stars end their lives in explosions called core-collapse supernovae. These explosions produce very large numbers of weakly interacting particles called neutrinos. Scientists working on the Deep Underground Neutrino Experiment, hosted by Fermilab, are seeking to perform a detailed measurement of supernova neutrinos. This effort could lead to groundbreaking discoveries in particle physics and astrophysics, including the first observation of the transition of a supernova into a neutron star or black hole.

To detect supernova neutrinos, DUNE will primarily search for reactions in which a neutrino collides with an argon nucleus and transforms into an electron. Precise 3-D images of these “charged-current” reactions will be recorded by advanced particle detectors. The images will then be compared with the results of simulations. A new computer program called MARLEY, described in this manuscript, generates the first complete simulations of charged-current reactions between supernova neutrinos and argon nuclei.

The MARLEY program allows researchers to study a variety of scientific questions. Theoretical physicists can use it to better understand what future measurements from DUNE might be able to tell us about the nature of neutrinos, stars and the wider universe. Experimental physicists can use MARLEY to practice analyzing “fake data” from a simulated supernova in preparation for the real thing. Building on pioneering reconstruction techniques first developed for the ArgoNeuT experiment and published in Physical Review D, the MicroBooNE collaboration carried out such simulations recently. All of these physics analysis tasks can be accomplished without requiring MARLEY users to be experts in nuclear physics. Several scientific papers have been published that include results calculated with MARLEY, and more are expected in the future. 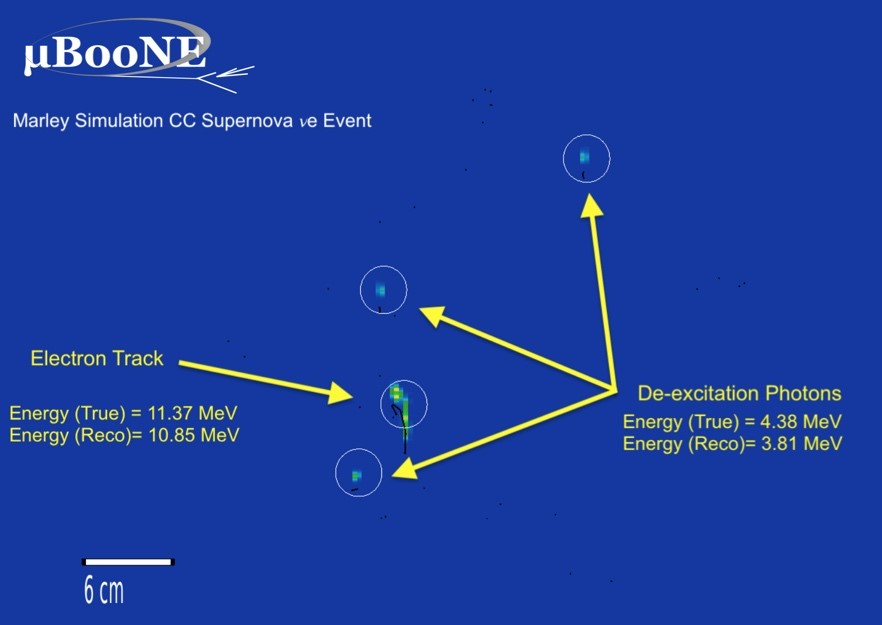 One of the most useful pieces of information that DUNE scientists plan to measure is the energy of each supernova neutrino that scatters within the detector. This data will provide insight into the way a supernova unfolds and test our current understanding of supernovae. Because neutrinos are weakly interacting, this cannot be done directly. Instead, scientists must carefully measure and add up the energies of all particles that are produced by a neutrino-argon reaction: not only the outgoing electron, but also any particles that are ejected from the nucleus itself. These may include gamma-rays, protons, neutrons, and sometimes clusters of neutrons and protons bound together. A full description of each neutrino collision includes the energy and direction of the electron, as well as similar details about the ejected nuclear particles. A new paper in Physical Review C explains how MARLEY provides the first theoretical model that can predict all of this information for charged-current collisions of supernova electron neutrinos with argon.

This research is funded by DOE Office of Science, DOE NNSA through the Nuclear Science and Security Consortium and a John Jungerman-Charles Soderquist graduate fellowship at the University of California, Davis.