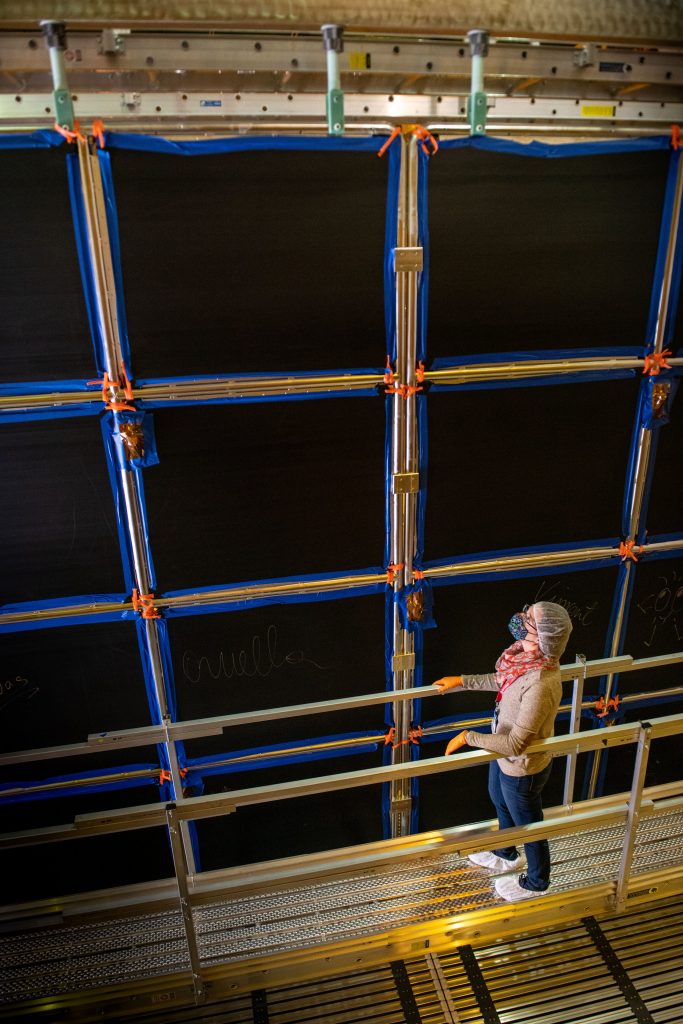 In September, Anne Schukraft looks up to the electrically isolating support hangers that suspend the weight of the cathode and connecting components from above on the Short-Baseline Near Detector. Photo: Ryan Postel, Fermilab

With a directive to look for physics beyond the standard model and study the behavior of the universe’s most elusive particles, the U.S. Department of Energy’s Fermi National Accelerator Laboratory’s Short-Baseline Neutrino Program has a full plate.

Consisting of three detectors — the Short-Baseline Near Detector, MicroBooNE and ICARUS — the program will expand on Fermilab’s internationally acclaimed neutrino research activities. By studying neutrino properties with these detectors, scientists will learn more about the role these tiny particles play in the universe.

On the Fermilab campus, the three detectors will sit staggered along a straight line, each probing an intense neutrino beam. SBND, under construction, will be closest to the neutrino beam source, just 110 meters away from the area where protons smash into a target and create a beam of muon neutrinos. MicroBooNE, which began taking data in 2015, sits 360 meters from SBND, and ICARUS, which will begin its physics run this fall, sits 130 meters beyond MicroBooNE.

Together, these detectors will study neutrino oscillations in unprecedented detail. In this process, a single neutrino can shift between the three known neutrino types as it travels through space. If there is a fourth type of neutrino or if neutrinos behave differently than current theory predicts, scientists expect to find evidence for this new physics in the neutrino oscillation patterns observed by the three detectors.

When completed, the SBND’s detector will be suspended in a chamber full of liquid argon. When a neutrino enters the chamber and collides with an argon atom, it will send out a spray of charged particles and light, which the detector will record. These signals will provide scientists with the information to reconstruct a precise 3D image of the trajectories of all the particles that emerged from a neutrino-argon collision.

“You’ll see an image that shows you so much detail, and at such a small scale,” said scientist Anne Schukraft, technical coordinator for the project. “If you compare it to previous generation experiments, it really opens a new world of what you can learn.” 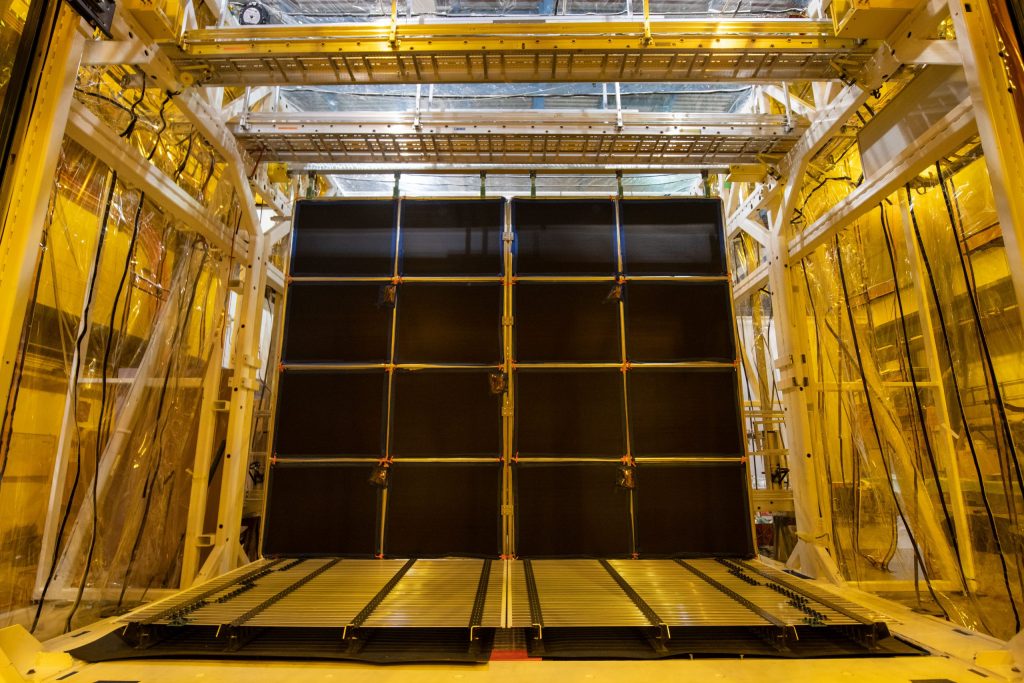 In battery-powered circuits, electrons flow between the negative and the positive terminals. In SBND, the electrons produced following neutrino collisions will follow the electric field created inside the detector: two anode planes and one negatively charged cathode plane. This is no tiny circuit, however. Each plane measures 5 by 4 meters, and the electric field between the cathode and each anode will be 500 volts per centimeter, with the cathode conducting a whopping 100,000 volts.

The two anode planes, each made of delicate wires spaced 3 millimeters apart, will cover two opposite-side walls of the cube-shaped detector. They will collect the electrons created by particles emerging from collisions inside the detector, while light sensors behind them will record the photons, or particles of light.

In the middle of the detector, an upright plane covered with reflective foil will act as the cathode. The assembly team lowered the heavy cathode plane into place in the detector’s steel frame in late July and expects to install the first anode plane in early October. Until installation, each of the light-sensitive layers are kept in a special controlled clean area.

When fully assembled, the detector will weigh more than 100 tons and be filled with argon kept at minus 190 degrees Celsius. The entire apparatus will sit in a cryostat, made of thick steel and insulation panels that keep everything cold. A complicated piping system will circulate and filter the liquid argon to keep it clean.

Different groups around the world — primarily based in the United States, the U.K., Brazil and Switzerland — built the detector parts and shipped them to Fermilab. But the warehouse-like building where the detector frame is being assembled isn’t the detector’s forever home.

Once the components are situated in the steel frame, the team will transport the detector several miles across the Fermilab site to the SBND building, where crews are constructing the cryostat and where the detector will actually collect its data. Schukraft estimates SBND will make its data debut in early 2023.

“The good thing about SBND is that we are building it from scratch,” said Mônica Nunes, a postdoctoral researcher at Syracuse University. “So everything that we are learning about this process is going to be really useful for the next generation of neutrino experiments.” 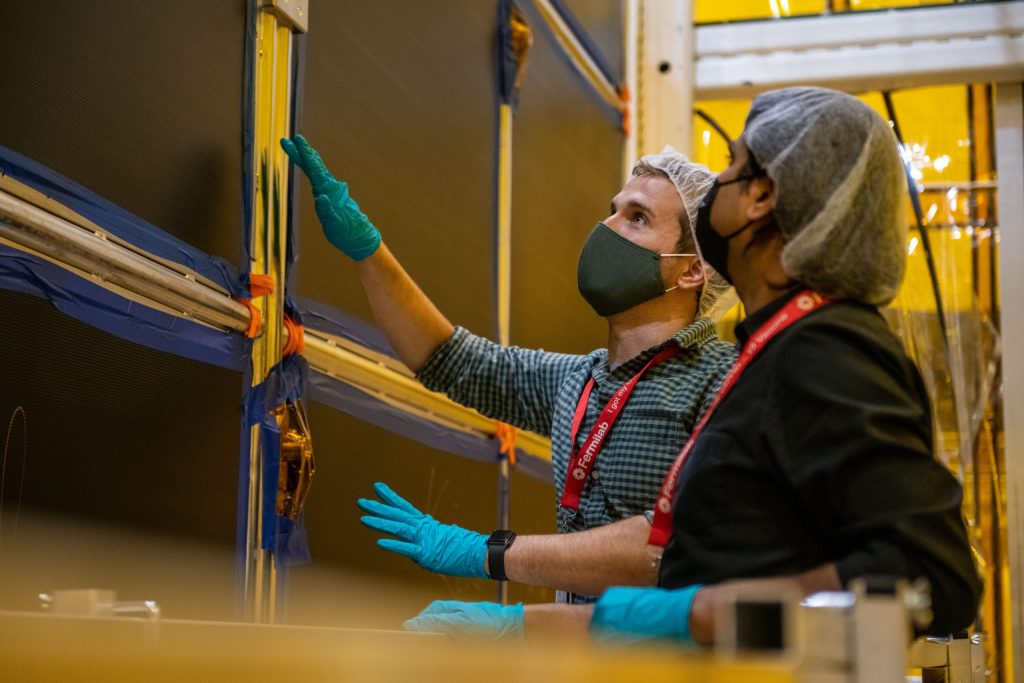 In September, Will Foreman (IIT) and Vishvas Pandey (U Florida) discuss the installation of light diffusers for the calibration of the photon detection system. Photo: Ryan Postel, Fermilab

SBND will complement MicroBooNE and ICARUS as the trio probes for physics beyond the Standard Model. In particular, researchers are searching for the sterile neutrino, a type of neutrino that doesn’t interact with the weak force. Two prior experiments, the Liquid Scintillator Neutrino Detector at Los Alamos National Lab and MiniBooNE at Fermilab, discovered anomalies that hint at the existence of these elusive particles. By measuring how neutrinos oscillate and shift types, the SBN Program aims to confirm or dispute these anomalies and add more evidence for or against the existence of sterile neutrinos.

“The idea is to rig a detector really close to the source of neutrinos in hopes of catching this kind of neutrino,” said Roberto Acciarri, co-manager of the detector assembly. “Then, we have one far detector and one in the middle, to see if we can see sterile neutrinos when they’re produced and when they’re oscillating away.”

SBND researchers will also examine with high precision how neutrinos interact with the argon atoms that fill the detector. Because SBND sits so close to the origin of the neutrino beam, it will record more than a million neutrino-argon interactions per year. The physics of these interactions is an important element of future neutrino experiments that will employ liquid-argon detectors, such as the Deep Underground Neutrino Experiment.

The Fermilab SBND project is supported by the DOE Office of Science.