PIP-II features a brand-new, 800-million-electronvolt leading-edge superconducting radio-frequency linear accelerator, or linac for short, that will enable Fermilab to produce more than 1 megawatt of beam power, 60% higher than current capabilities. To achieve this groundbreaking feat, the linac will be made up of cryomodules, which are vessels containing niobium cavities.

Safely transporting these delicate and expensive assembled components to Fermilab will be a major challenge for the PIP-II team. Based on a recent experience where a cryomodule for another experiment was damaged in transit, the team is taking extra precautions to ensure the safe transportation of PIP-II’s cryomodules, including extensive tests of the transportation system. 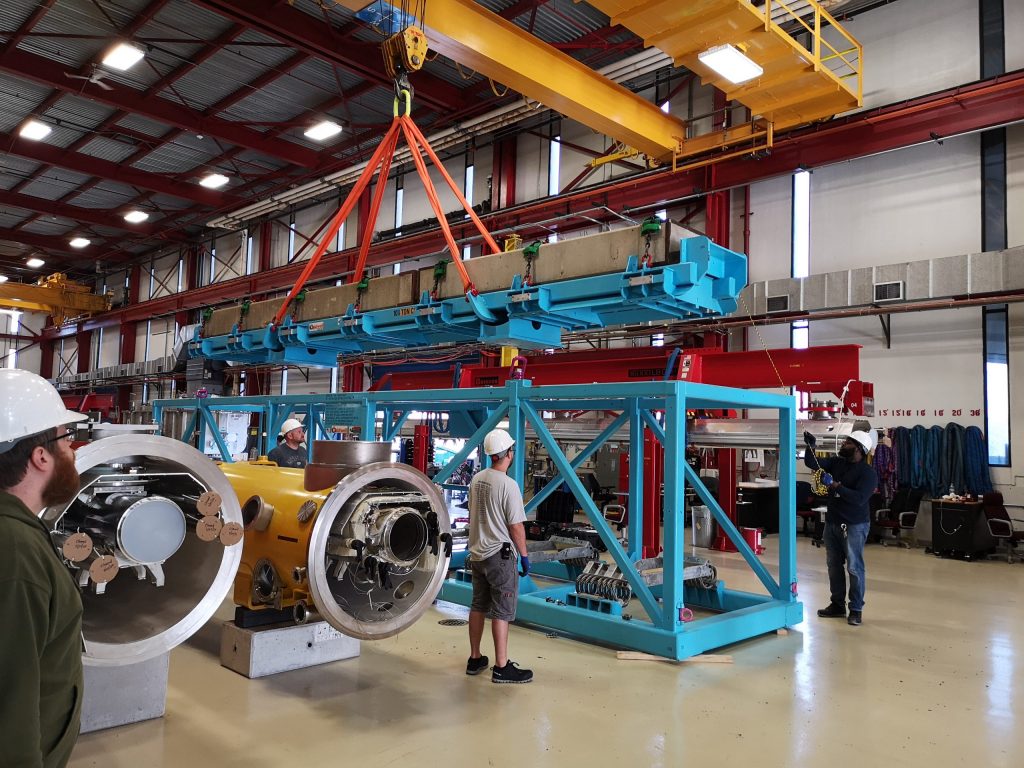 The concrete dummy load being lowered into the test frame at the Industrial Center Building. Photo: Mitchell Kane, STFC

The first step was to design, build and test a transportation frame that will hold and protect the cryomodules. While PIP-II collaborators at STFC—and later, CEA—will eventually design and build their own frame, a prototype of the STFC frame was built at Fermilab where it will be used to ship a dummy load and prototype cryomodules. This design and validation are a team effort between the three labs, with the results and lessons learned influencing the design of the final shipping frames that will transport the production cryomodules from STFC and CEA to Fermilab.

“The whole project is working as one to [achieve] one approach for transport,” said Jeremiah Holzbauer, a Fermilab scientist in the PIP-II Technical Integration Office. “We’re all learning through this first process together.”

Mitchell Kane, a mechanical project engineer at STFC, designed the test frame in close collaboration with Fermilab, who then hired a U.S. company to build the frame.

The most difficult part of the process, Kane said, was that there isn’t yet a finalized design for the cryomodule that the frame will eventually hold. “You have to have some flexibility in the design. With flexibility, there’s uncertainty,” said Kane.

The Fermilab team fabricated a dummy load to be a replica of the cryomodule—essentially, concrete blocks with the dimensions, weight and mounting points of the cryomodule. They then demonstrated the complex installation of the dummy load into the test frame and prepared it for transportation tests.

For now, the test frame assembly is an example of the successful collaboration of an international team—hopefully, one of many triumphs to come for PIP-II.

“We were able to actually have a pretty flawless first-time around of setting this thing up,” said Ryan Thiede, technical specialist for cryomodule assembly. “It turned out pretty well. Everything lined up. We had very few problems, and it seemed like everybody was pretty impressed with the first go-around of the setup.”

Kane visited Fermilab in late April to oversee the frame assembly and dummy load test. “Because of COVID and everything, I hadn’t seen anything physically for two-and-a-half years. So actually going there and seeing my design in person and it actually [going] together without any problems was probably the best [part of this experience],” he said.

On April 25, the test frame endured a three-hour highway road test to check the performance of the isolation system, which is designed to cushion the ride of the cryomodule. “It went extremely smoothly. The design is quite good,” said Holzbauer.

This summer, the test frame holding the dummy load will be shipped to the UK where STFC technicians will disassemble it, put it back together and ship it back to Fermilab. This process will also check the transport logistics, such as customs inspections and airplane loading.

“If that goes successfully, the transport system is verified,” said Holzbauer. 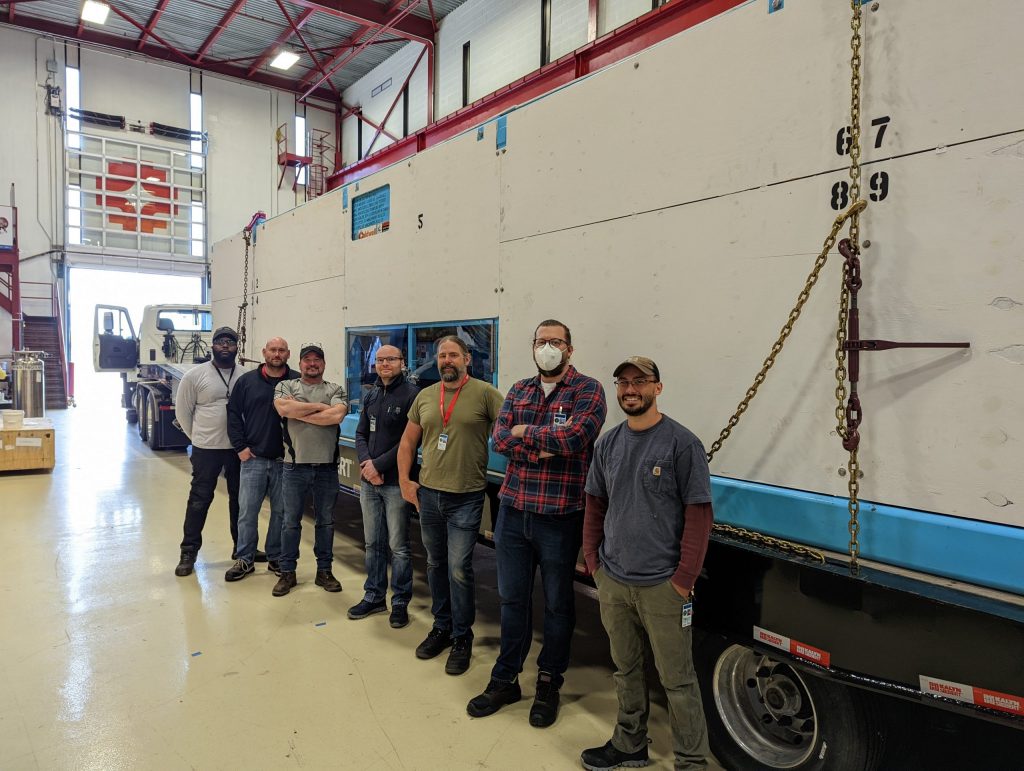 Next, PIP-II will use the frame to ship a prototype cryomodule to the UK, which is currently planned for the end of this year. Once there, PIP-II partners at STFC will unload the prototype cryomodule and take it through instrumentation and vacuum checks before sending it back to Fermilab.

“Once it’s shipped back to us, we’ll test it again and make sure it really still performs as well as it did,” said Holzbauer. “That’s the ultimate proof that we can ship cryomodules. And that basically is the core demonstration [that] we can ship all of our cryomodules.”

Finally, in a few years’ time, the STFC will ship the production cryomodules in their own refined version of the shipping frame to Fermilab for the construction of PIP-II. Kane said they have already noted some small tweaks in the design that they’ll make to the UK frame.

Then, in 2025, it will be CEA’s turn to put their own transportation frame to use. Once production begins, the French collaborators plan to ship cryomodules to Fermilab at a pace of one per month.

Robin Cubizolles, an engineer at CEA and a PIP-II sub-project coordinator for cryomodules and transportation, observed the procedures for the assembly and design of this test frame and said he learned a lot that he will inform the CEA transportation system.

“I want to thank Fermilab for the good collaboration. [There is] a lot of transparency in every aspect,” said Cubizolles. “For me, it’s my first project with this kind of [collaborative working arrangement], and it’s really nice to see that.”

For now, the test frame assembly is an example of the successful collaboration of an international team—hopefully, one of many triumphs to come for PIP-II.

“Working between the technical team here like myself, the instrumentation people here and the partners both at CEA and STFC, I think we made a lot of very good design changes in the pre-planning stage,” said Holzbauer. “We got a lot of our procedures really in line, really vetted, and all the specifications were very clean. They helped us with vendor oversight. And so that all built up to today, when we all came together real smoothly, really clean, very safely, and it all went exactly like we wanted it.”