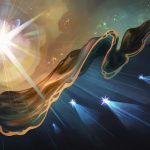 Most astronomers trek to the mountaintops to study the stars, but a group of physicists are seeking the secrets of the cosmos with a detector at the bottom of the ocean.

What are neutrinos good for? | Even Bananas 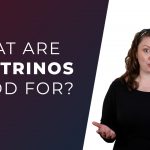 Neutrinos are powerful tools for better understanding how the universe works and improving our theories, like the famed Standard Model. But what else are neutrinos good for? Neutrino physicist Kirsty Duffy explains some of the (mostly not-so-practical) ways we might use neutrinos.

The biggest ice cube in the world January’s column was about snowflakes; this is about an ice cube, but a huge one called – wait for it – IceCube. Each side is 1 kilometer, 1,000 meters, so the volume is one billion cubic meters, and it weighs a billion tons. Scientists wanted a massive block of clear ice to detect mysterious neutrinos coming from far away in the universe. These particles interact with matter so rarely that 99.9999% pass right through that block leaving no trace. But one in a million hits a quark, much smaller than a proton, creating a shower of new particles, which make flashes of light in the ice.

Expanding a neutrino hunt in the South Pole 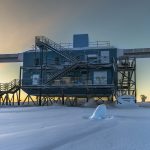 Underneath the vast, frozen landscape of the South Pole lies IceCube, a gigantic observatory dedicated to finding ghostly subatomic particles called neutrinos. Neutrinos stream through Earth from all directions, but they are lightweight, abundant and hardly interact with their surroundings. A forthcoming upgrade to the IceCube detector will provide deeper insights into the elusive particles.

From Big Picture Science, Feb. 18, 2019: Fermilab scientist Anne Schukraft is interviewed in this podcast episode about ghostly particles called neutrinos — intriguing partly because they came decades before we had the means to prove their existence.

For the first time, an elusive ghost particle blasted from deep space is seen on Earth

From Mashable, July 12, 2018: Josh Frieman is mentioned in this article on the IceCube experiment, which caught sight of a neutrino sent into space by a black hole, known as a blazar, marking the first detection of its kind in history.

In a cosmic first, scientists detect ‘ghost particles’ from a distant galaxy

From The Washington Post, July 12, 2018: At the IceCube experiment at Earth’s South Pole, 5,160 sensors buried more than a mile beneath the ice detected a single ghostly neutrino as it interacted with an atom. Scientists then traced the particle back to the galaxy that created it.
The cosmic achievement is the first time scientists have detected a high-energy neutrino and been able to pinpoint where it came from. 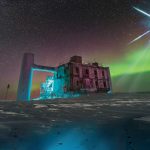 A pair of results bring neutrinos into the new era of multimessenger astronomy.